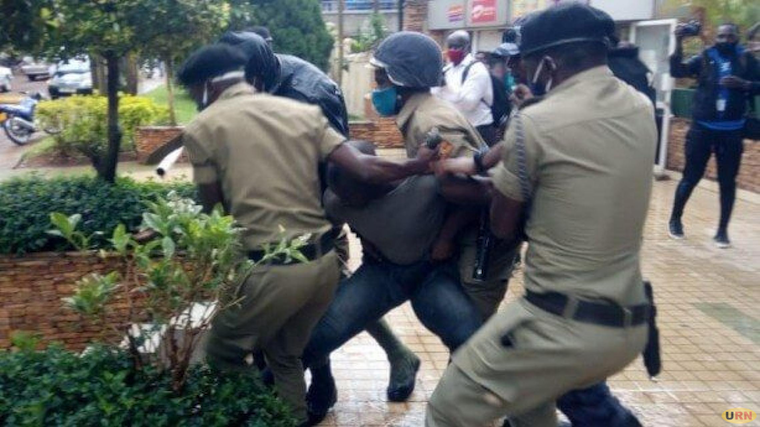 Of late, there are a couple of messages running on various media platforms urging Ugandans to keep peace and avoid protests.

I must commend all institutions and individuals behind this campaign, specifically those who may not be cynical in their calls. I would assume that, apart from those that reap from chaos, many people desire peace. We know the costs of violence both in terms of life, possibilities and property.

How could we not know, given our tumultuous history, and with the fresh graves born of violence? Who of a working conscience wouldn’t know or hate violence when they watch news of police and army conduct during the ongoing presidential campaigns?

Perhaps the state’s intention is to make us hate violence by ruthlessly exercising and displaying it. As a parent, I always encouraged my little children to follow developments in their country. News at 9pm would often find us waiting together. When I hadn’t been able to watch, they would brief me on what I missed.

Today, I find it very painful to watch news with them, because it is always packed with police and army violence. For these little ones, police and army mean violence. Even when we meet someone in such uniforms on the way, the youngest one hides behind me.

Within intervals of such violence on our screens, someone comes urging citizens to shun protests and violence – to be peaceful. There is clear indication that the senders of the message are worried about something horrible that could happen after the elections.

It is also clear that many are avoiding the potential cause of what they fear to happen. Hence they choose to conveniently speak to consequences. What is likely to cause post-election violence in Uganda? Is it because the public does not know the importance of peace?

As we condemn protests, why are many of the ads silent about their ultimate cause? Why are the senders of the message keener on demobilising angry people than on addressing the causes of their anger (or doing both)? Why are many of them silent about the fact that demonstrating as a constitutional right is practically criminal in Uganda today, and that this pushes people to look for alternative means of expressing dissatisfaction?

When did Uganda last have a demonstration against government (in) action that was okayed by police? Why would the organisations funding these peace messages put most of their focus on calming down the victims than as well calling the oppressors to order? Aren’t their messages both intently and inadvertently serving the oppressor?

After the 2016 elections, we co-authored a journal article with Henni Alava titled ‘Religious (de)politicisation in Uganda’s 2016 elections’ that details how this dynamic played out then.

I don’t want no peace, I need equal rights and justice… Everybody is talking about crime, tell me who are the criminals?’ Around the same time, Tosh’s contemporary, Bob Marley, released the song War where he paraphrased Emperor Haile Selassie’s iconic speech at the United Nations General Assembly of 1963.

In the song, Marley counsels that until the philosophy that holds one group superior and another inferior is finally and permanently discredited, there will be war. The dream of lasting peace will remain as a fleeting illusion to be pursued, but never attained.

And until the ignoble and unhappy regimes that hold our brothers [and sisters] in sub-human bondage have been toppled, utterly destroyed, there will be war and rumours of war. These lyrics should speak to our interventions in these uncertain times so that we rise above superficial cries for peace.

In my view, Marley and Tosh’s songs were not, as such, calls to war. Rather, they were meant to sensitise the world to the actual causes of war and instability. They can be summarised thus: if you want peace, work for justice. It is vain and utterly pretentious to call for peace while remaining silent about the injustices that cause instability.

In this electoral season, the real questions behind our fears about the post-election period are: what will happen if the election is rigged (as the signs of bias and impunity are already glaring)? What will the cheated masses do? Aren’t they going to become violent?

Isn’t the state going to kill many people in response and paranoia – as sampled in the recent protests where over 50 were killed in just two days? If these are our fears, as I suspect, why are the messages for peace not as well calling for free and fair elections in order to prevent the consequences of unfair elections?

Why are some of these individuals and institutions silent about the ongoing daily brutality and unfair conduct of state institutions that are spiralling public anxiety and anger? Why aren’t many of them addressing the Electoral Commission that is acting blind to the impunity in the campaigns and already showing sides?

Should we assume that these good peace campaigners are not aware that the conduct of the Electoral Commission is key to determining the post-election situation? Many of these peace crusaders are acting like traditional ssengas (aunties) that counsel women never to fight back their violent husbands.

‘If you want peace in your home, let the man do what he wants. A good wife should never question her husband if that is likely to make him angry and violent. A peaceful wife is one who obeys her husband at all times and finds ways of accommodating his excesses’.

Dear peace trumpeters, if peace and calmness is all you can tell us amidst all that is happening, you are part of the problem.be war and rumours of war. These lyrics should speak to our interventions in these uncertain times so that we rise above superficial cries for peace.

Bribing is now the last one, and the scavengers know it.

They feel that the buffalo is falling . They all gather to grab a piece. The pimps are busy doing what they do best before business closes.

I say it again . MUSEVENI has already LOST to PEOPLE POWER . That is why he is turing Kampala i, Wakiso and Mukono as a bunker , using residents as human shield .

By Wednesday , some sort of "lockdown" is going to be announced . We will only be allowed to walk to and from the polling stations.
From Friday , no civilians will be allowed to enter Kampala .

All actions of a defeated DICTATOR are going to happen, including disarming sections of the police and sc crime preventors.

Remase , Akot , prepare your "UNITY"
Report to administrator
+2 #52 Opolot 2021-01-10 23:21
Ramase, your mission is clear. You simply want to discourage people from making whatever attempts they can to remove the dictator.

All your focus is on demobilising them. You were talking of Besigye being right to abandon elections, haven't you seen him on the trail campaigning for Amuriat?

Let people try voting once again, be rigged again, and Plan B gets stronger justification. Stop confusing people yet you have no solution you can take part in.

Such people are part of our problem. Wooden you are right. Remase is pro-regime in disguise
Report to administrator
0 #53 Opolot 2021-01-11 11:26
So Ramase, how do you suggest that the UNITY you are talking about will be realised in the first place?

You are as idealistic as those you criticise. You expect that people are going to come up and say, okay let's unite?

DO you think all the so called opposition candidates are out there because they are convinced of a win?

Why didn't they leave it for the strong ones? It is because the Unity you suggest is impossible here. Let everyone push from their corner, as long as they are putting pressure on the dictator.

A united front, even if it were possible, is very easy to scatter. Except if it is a Sudan kind of thing, which can't be allowed here, even if it means killed thousands
Report to administrator
+1 #54 Wooden K. 2021-01-11 13:23
Ramase and his twin Akot`s mission is worse than merely discouraging people from removing Museveni.

I don`t want to say a lot , but I know that Remase has been nursing a grudge against Buganda since he and his associates were scattered .

His main mission here is not to remove Museveni , He is here to try and wage a conflict between Mengo and the dictatorship . He imagines that if Mayiga , as an example , steps behond his role as Buganda`s Prime Minister and takes on another role as confrontational member of the opposition , a crush like the one of 1966 will occur.

Remase and his other side Akot are northerners. How often do you see him naming names of Acholis or Langis that are helping Museveni to capture the north ...?
Report to administrator
123456