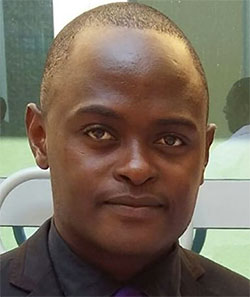 I am marvelled at the way things are handled in our country. For the past few weeks, I have heard government talking about external powers having influence over our politics, how they are sponsoring the current unrests in the country, and in doing so, they are trying to get their interests promoted in our country.

First and foremost, I hate to hear such stories and if at all they are true, question is, didn’t government see this coming?

A government that doesn’t not listen to the cries of its people, when you hear the arrogance by the state in responding to the grieved its annoying. A government built around individuals - no respect for established institutions, failed systems, failed Constitution, which in my view, serves the interests of the president, high levels of corruption.

In fact, it's said that Uganda loses over half a trillion shillings through corruption every year and the most worrying part is they steal from their own country to go and invest somewhere else, the high rates of unemployment among youths who constitute about 75 per cent of Uganda’s population.

What I have lived to see is; selfishness and greed. Those in power seem not to get enough, they have allowed to be enslaved by power and money to the extent that lives of others don’t matter. Someone is willing to take a life of another person if that’s what is going to keep him in power.

The moment you lose value and respect for life of others, you become a liability to the nation. A government that doesn’t respect the rights of its citizens, where the army shoots at unarmed civilians who are simply trying to be heard.

Attacks on the journalists whose crime is reporting events as they unfold. If the powerful are capitalizing on the weak to make themselves more powerful and rich. If you can do all this to your own brothers and sisters, you don’t value them, you don’t listen to their cries, you threaten them, you kill them, and you oppress your own.

All these things generate anger and rage. And the recurring oppressions can give birth to a lot of negative energy. If someone from an enemy camp therefore comes with a soothing deal to help the weak to bring the powerful down, no doubt they will do it. But in the end we all lose.

What am trying to say is; if President Museveni had respected systems and institutions of government and addressed the concerns of Ugandans and listened to their cries, let the Constitution do its job, he wouldn’t be complaining of external influence.

There is this rumour because the house is divided, but it is because of just a few individuals who have failed to make the right decisions. Libya wouldn’t be where it is if Mr Muammar Gaddafi (RIP) would have stepped down and organized free and fair elections in which Libyans elected their next president. He would have even stopped the evasion of the enemy camp but he let it happen to a country he claimed to love so much.

There are some risks which are not worthy taking most especially if you understand your position so well, but greed won’t let wisdom to prevail. So if President Museveni is a peace-loving Ugandan as he claims, the power is in his hands to make a right decision to avert any future calamities.

Nobody will respect your house if you don’t respect it. The enemy will capitalize on the rage and anger of your brothers to get his mission accomplished. What is so hard to learn good lessons and do for once, something good? Kenya did it, Tanzania did it, Ghana did it, Ethiopia as well, Congo seems to follow suit.

The author is a concerned Ugandan

Musevni has reduced Ugandans to NOTHING & this is what keeps him in power, but once Ugandans do UNITE, the demon who believes Uganda belongs to him will be no more!

Even developed countries leaders who ensure social services are today at pain to get seconde 5 years term because thier people want more services!

Museveni came to own the couintry & our people are handing it to him without a fight, while letting the demon rule them through a tribalistic system that keeps them divided, thus powerless against him?

Why would Museveni leave his birth place of ruler of Uganda or use his tax (pocket) money on a people who cannot throw him out?
Report to administrator
-2 #2 Akot 2018-09-11 19:03
Why should Museveni worry about Ugandans when they only remind him he is a migrant, reason he is so mad & humiliates/deprives/empovrish Ugandans before finally owning their country?

Who is best placed to make Uganda home for foreigners, if not migrant Museveni who wants Ugandans to know the country belongs to him?

Yet, Ugandans still believe it's Museveni & no other to rule them!

Museveni do this for us, Museveni give us that, Museveni think about us & not about foreigners... goodness gracious, what is wrong with Ugandans?

Why do Ugandans believe Museveni is there for ever & will never die, not even of old age?

Museveni must be on top of the world seeing how Ugandans react to his abuses by just wanting, waiting, begging!
Report to administrator
-4 #3 Andama 2018-09-11 23:00
What decision are you talking about. This is a lousy article. Buganda and the west supported the Luwero war because they believed in M7.

The Kabaka was brought back to Luwero to glavanize support for M7 in order to remove the northerners.

When the war in the killing thousands weekly, in Buganda and western Uganda it was the northerners killing themselves, the list goes on, so why are we now castigating M7. This is a man who has stood by his actions from day one.
Report to administrator
+1 #4 kelem 2018-09-12 10:52
There will be no happier day than the day Kaguta is done with
Report to administrator