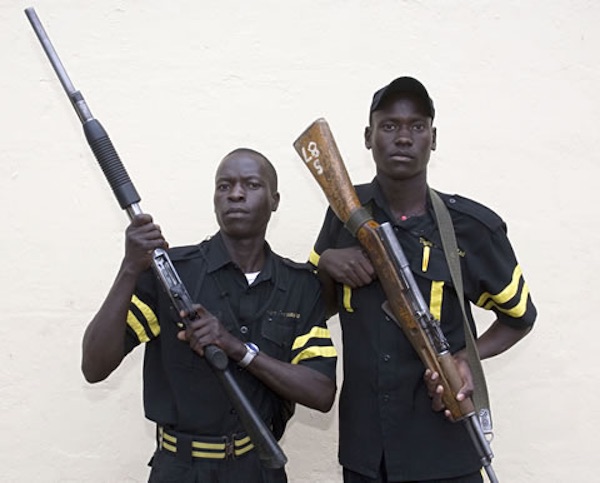 The Inspector General of Police (IGP), Martins Okoth Ochola has issued a 'final warning' to private security companies that have not heeded his orders of deploying two guards per station to minimize incidents of being targeted by thugs.

Through the director police operations John Nuwagira, Ochola indicates that they have held several meetings with the owners of private security companies to stop lone deployments but the majority have remained adamant.

Lone deployments of private security guards, according to Ochola, have left many guards to fall victim to attackers who in most cases are armed with rifles or machetes. The police chief said that any private security company that will not implement the double deployment directive will have its operating license revoked.

“In order to safeguard the lives of the private security guards and also to minimize loss of firearms, you are once again directed to deploy at least two armed guards per guard point. This serves as a reminder and final warning. Failure to comply with this directive will attract punitive action which may include cancellation of the operator's license,” Ochola said.

Samuel Muhindo and Benard Nalulu were killed in the last seven days in two separate attacks in Kawempe and Kireka respectively. Muhindo was killed on Saturday night at 8:30 pm while on guard at general stores at Katale zone, Lugoba village in Kawempe division. Nalulu had been killed two days earlier also outside his workstation at Kamuli zone C. In all these two attacks, the victims had lonely been deployed and their weapons were taken.

In response to Ochola’s last warning, Grace Matsiko, chairman of The Uganda Private Security Association (TUPSA), said they are not opposed to the idea of deploying two guards per station but the blame is on their clients that reject double deployment because of extra costs involved.

Matsiko said police should first conduct sensitization meetings with business owners through their umbrella bodies among others the Kampala City Traders Association (Kacita), Uganda Manufacturers Association (UMA), and Association of Oil Marketers Uganda Limited to make them appreciate the importance of having double deployments.

A single guard armed with a baton costs Shs 400,000-600,000 monthly while one armed guard costs Shs 800,000-1,00,000. Police spokesperson, Fred Enanga, said there have been several warnings to private security companies about the dangers of lone deployments. Enanga said such advice and guidance have not been taken seriously by operators of private security companies.

Ochola said the final warning has been given based on the numerous meetings that have been held discussing the same matters but in vain. Police said a meeting was held on August 23 this year, another was held on November 21, 2018, and another was on August 15, 2016, but all these have not yielded results.

“In spite of the warning letters to you, deployment of lone armed private guards in assignments has continued. The result has been that many security guards have fallen victim to this with others losing lives and the firearms being taken by thugs,” read the latest directive.