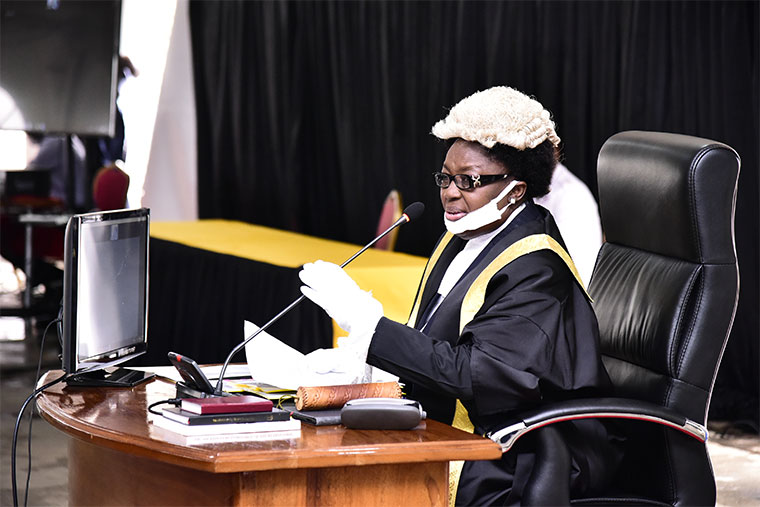 Parliament has passed the Sexual Offences Bill 2019 which reintroduced a ban on homosexuality in the country.

In a heated debate on Monday, the MPs also rejected a proposal that allows a person, who had consented to a sexual act to withdraw that consent at any time before or during the performance of the sexual act.

The object of the bill is to enact a specific law on sexual offences for the effectual prevention of sexual violence; to enhance punishment of sexual offenders; to the protection of victims during sexual offences trials; to provide for extraterritorial application of the law; to repeal some provisions of the Penal Code Act among others.

Now in a heated debate, the MPs generally supported the bill, but men and women were divided when it came to issues of withdrawal of consent during sexual intercourse, before finally rejecting it.

According to the legal and parliamentary affairs committee chairperson Jacob Oboth Oboth, the bill proposes to introduce 'post-penetration" consent which occurs in a situation where two people initially engage in consensual sexual intercourse, but during intercourse, one person changes his or her mind and withdraws his or her consent to the sexual act.

"In most sexual offences the act being punished is the act of engaging in a sexual act without the consent of the other person. The bill now proposes to introduce forced penetration consent which occurs in a situation where two people initially engage in consensual sex intercourse but during the intercourse, one person changes his or her mind and withdraws his or her consent to the sexual act. Whereas the committee is agreeable to have the principle of forced penetration consent as per the laws of Uganda, the committee is concerned that the provision may cause practical and enforcement challenges. For instance, the provision is not clear as to how this will practically work. How will the other person know that the other person has withdrawn his or her consent? The committee, therefore, recommends that clause 36 be deleted." said Oboth.

Several MPs who rose up to speak mostly commented on the withdrawal on consent during sex. The chairperson of Uganda Women Parliamentary Association (UWOPA) Pamela  Nasiyo Kamugo said that when you realise that the man is not protected, a woman should be allowed to withdraw consent and discontinue.

"You agree to go for the sexual act and then when they reach there for example, if they have agreed to have protected sex and then someone says after reaching there that no we’re not protecting it, somebody should be allowed to withdraw consent. I have shared an experience with some woman who told me she didn’t know that her IUD - a family planning method moved from its original place. So when the man inserted gear number one, I think you understand me, honourable colleagues, the woman felt a lot of pain. She requested for withdrawal, the spouse was very understanding he allowed to the withdrawal," said Nasiyo.

Kilak North MP Anthony Akol proposed that consent should be applied only during health complications, traditions, but at this rate it will be difficult to measure consent during the act of having sex.

"The problem here is how do you measure consent because when you go to my friends in Karamoja, a lady will not say yes. I mean, I have personally seen on the way when girls are struggling with boys to reach home. In my culture, a lady can say no when she’s saying yes and this is an issue we have to deliver with an understanding that we have different levels of Ugandans - those who are educated and those who are not educated. Therefore madam speaker my issue is simple, I really want us to leave the consent in the bill but we must make sure that we specify and especially let us talk about maybe if there is health complication, if there is unprotected sex." Akol said.

Stella Atyang, the Moroto Woman MP in her support for the withdrawal of consent during sex said that there are cases when one has consented to having sex naturally, and then the partner introduces things unfamiliar and it should be made okay for the dissatisfied partner to withdraw. The speaker of parliament Rebecca Kadaga said that the proposal was complicated especially where it allowed for consent during sex.

Minister of Finance in charge of planning, David Bahati said that the proposal to allow withdraw of consent during sex would cause conflict, and hinder the passing of the bill. He proposed that the clause be deleted.

Monica Amoding, the Kumi Woman MP conceded saying that although many women would have loved to have the withdrawal of consent, she is happy to have it withdrawn and the bill passed.

Cyrus Aogon, the Kumi MP rejected the proposal on unsolicited contacts like touching a woman or a man, saying sometimes you touch someone by mistake. He also rejected the proposal to punish someone for using gestures, saying this is the process of wooing a partner. Kadaga however challenged Aogon, asking if it's okay to touch a woman in a taxi, and Aogon said this needs to be specific.

The committee also introduced a ban on sexual act between persons of the same gender (homosexuality).

“The committee, therefore, recommends that for completeness, clause 11 should stand part of the Bill albeit with the amendments that the ingredients of the offence are defined to include; A ban on a sexual act between persons of the same gender,” said Oboth.
This proposal is found under unnatural offences which also prohibits sexual act with an animal or sex in an order contrary to nature. The punishment for this is imprisonment for five years. Although the proposals were read before the committee, members adopted with no objection or comment. Oboth says they are happy that the ban on homosexuality has finally happened, he says that there should not be any questions on quorum like the last time.

"One of the best clauses has really banned sex from the same gender. That is homosexuality entrenched fully. The MPs were just enough to pass the bill, the business was well constituted. There was nobody who raised any issue of quorum." said Oboth.

The ban on same-gender sex comes after the Anti-Homosexuality Act was passed by parliament in 2013. The law proposed life imprisonment or the death penalty. Although the bill was signed into law in 2014 by President Yoweri Kaguta Museveni, it was annulled by the Constitutional court over issues of lack of quorum.

+1 #1 John Ivan 2021-05-04 18:31
This kind of bill passed out shows there is still God in our Parliament. Good job the beloved honorable members of Parliament of the Republic of Uganda.
Quote | Report to administrator
-8 #2 Clive Shutler 2021-05-05 00:38
Uganda is so backwards it`s unbelievable.
Quote | Report to administrator
Refresh comments list
RSS feed for comments to this post
Add comment