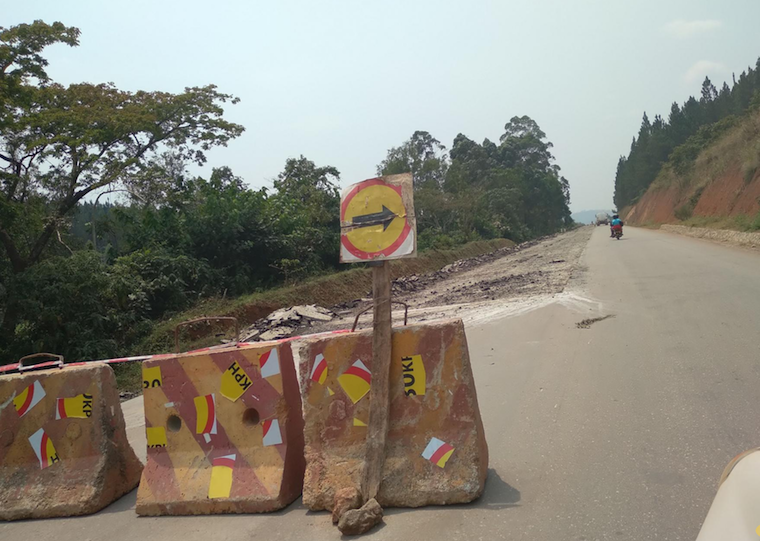 The cracked section of Kyenjojo road

The Shs 119 billion Kyenjojo-Fort Portal road has already developed cracks, less than three months after it was commissioned by President Museveni.

The road rehabilitation project, fully funded by Ugandan taxpayers was contracted to China Wu Yi construction firm. Upon completion, the 50-kilometre road was commissioned by Museveni in December last year.

However, the road, which starts from Kyenjojo town council and ends at the Mpanga market T-junction in Fort Portal Tourism city has developed cracks around Kaihura trading centre in Butiiti sub county, Kyenjojo district. The stretch measuring about 300 metres has now become bumpy, forcing the contractor to cordon it off.

Now, the Chinese company has started removing the tarmac to pave way for repairs. The project manager Sun Quitang has said that they are solely responsible for the defects and they will not ask for additional money from the government of Uganda.

"There is some fragment issues because when you’re travelling the road user will feel uncomfortable, so we decided to redo it instead of patching patching. If you do patching patching you don’t look good," said Quitang.

Meanwhile, shop owners in Kyenjojo town council are dissatisfied with the project. They say that the steep sides of the road where their shops are located were left uncovered, which has given way to running water into their shops.

Moses Businge, one of the affected shop owners, says that elsewhere, these steep sides have been covered with stones and trenches have been constructed to avoid water stagnation.

But Quitang explains that they were following a road design by Uganda National Roads Authority (UNRA) and the additional constructions were not part of their work scope.

-3 #1 Wainanchi 2021-02-14 01:57
Every road constructed has experts consultants who monitor and give ticks of approval for newly built tlrosdd

Who gave permission for this shoddy works? They have to be prosecuted and their licensed revoked.

There is an abnormality in my opinion with Africans!! They are totally unable to learn that Chinese things are just that- Chinese!!!
Substandard especially when they make the said things that includes roads, vaccines etc for Africa !!!

This is your tax money my friend Wanainch that this Chinese company has been paid for the road AND IN THREE MONTHS ONLY AFTER COMMISSIONING, IT HAS CRACKED!!!!

Why doesnt Uganda want to Use more competent European, even Ugandan, American firms that can deliver better and durable roads????
Report to administrator
+1 #4 kabayekka 2021-02-14 13:35
Well then there goes the dodgy professionalism on the continent of Africa.

A better company concerned with the better future of this country should have put forward a suggestion and a budget for such additional access construction for the various townships.

This problem of access to shops seems to have been solved somehow well on the new roadway stretch of Iganga-Tirinyi-Mbale.

One might want to suggest that Ugandan engineers should be the one to start opening up these country roads after checking them thoroughly.
Report to administrator
-2 #5 Wainanchi 2021-02-14 16:53
@Mbeho Ahuc-- The point is in tick of approval.

Uganda ministry of works isI believe,in charge of supervision and it hires consultants,usually foreign experts or Ugandan experts who we surely have since huge number of roads have been constructed.

It diesnot matter who does the construction,we,Uganda,pay the works In this case the Chinese road company needs to make additional works and repair damaged sections Chinese are good but what if some of our people made some problems??

We can usually do this .But Chinese can do it as well but there are contractual obligations and I think they will repair sections with faults
Report to administrator
+1 #6 Akao 2021-02-14 22:51
Nothing good comes from China, while they are taking resources all over Africa to further develop their country while doing medicore work for Africans.

Why are so many educated engineers in Uganda but they can't build roads? Can that be explained to the population
Report to administrator
0 #7 Mun 2021-02-15 12:18
The drive to construct roads has been the focus of the ruling class in the recent past. We should all be asking the question "what is the quality of these roads".

I remember a lorry turning and sweeping off the tarmac of the Kasese - Fort Portal road that had just been completed near the BOU roundabout in Fort Portal Town.

And guess what even when locals demonstrated about the road the dis 'Hon' ministers of then bashed the religious leaders to remain in their respective lanes.

And currently, the so-called 'standard 15-year life road' in the words of this dis'Hon' ministers, is now being reconstructed again. Hmm oba the the 'mafioso' conspirators are right?
Report to administrator
0 #8 WADADA rogers 2021-02-15 21:10
It was a political road made to appease voters and for the big man to get in commissioned for votes, the road had a life span of three months, it has outlived its time, am sure UNRA is looking for a new contractor while the former contractor has been given another road.

Just go and look at Tirinyi road if you want to know the power of being connected. The contractor is the definition of shoddy works having played the same games on Tororo- Mbale- soroti road
Report to administrator
0 #9 kabayekka 2021-02-16 07:13
Surely Wadada rogers I agree to your point that most African leaders are bent on promoting their jobs as that one of building public roads.

Since they have nothing to show about exactly what is their job description is made out of. For the engineers building the roads in Uganda, I have travelled on those Iganga to Mbale and Tirinyi main roads.

As you said the quality is still lacking. Well rogers go to the short road of about only 7 miles from Mpererwe to Kitagobwa and connect to Matugga. It is a civil engineering conundrum!
Report to administrator
0 #10 kabayekka 2021-02-16 07:19
For the politicians in these areas that are using these messy roads, they are only proud of winning political votes and obtaining access to the most expensive parliament house in the land!
Report to administrator