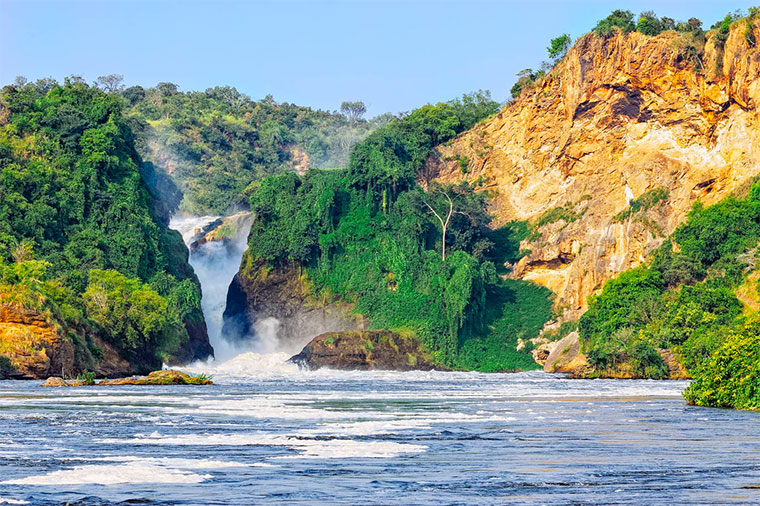 Gov't wants to build a dam on Murchison Falls

Godfrey Kiwanda Ssuubi, the minister of state for Tourism has said they are ready for a fight to save Murchison Falls so that a dam is not built on it. Speaking at a corporate Stakeholders meeting organized by the Uganda Wildlife Authority (UWA) in Kampala, Kiwanda urged tourism stakeholders to ‘put on their boots’ because the war has begun.

Kiwanda’s remarks were prompted by a question from one of the stakeholders who asked what they should do now that cabinet had given a node to those wanting to construct a power dam on the falls, which are billed as the fastest in the world.

“We have to put our foot down; the war has just began. We need scientific research to show the negative effect of a dam on tourism. It’s a real war and you should put on your boots now,” Kiwanda said.

Speaking to reporters on the sidelines of the meeting, Kiwanda added that their stand as the ministry of Tourism was that, there was no need to even carry out a feasibility study to show whether government benefits more from tourism or electricity that will be produced from the dam.

“Cabinet decided that there should be a feasibility study. But our position is clear, we shouldn’t have a dam on the falls because that’s likely to affect tourism. We agreed to scientific study and any decision on whether to build a dam or not should be based on a scientific study,” Kiwanda said.

About four months ago, an advert appeared in the New Vision newspaper, where the Electricity Regulatory Authority (ERA) as calling for bids to build a dam on Murchison Falls. The advert caused an uproar, with conservationists saying if constructed, it was going to deal a devastating blow to tourism, as the falls that are located within the park are one of the most visited areas in the park.

Meanwhile, Kiwanda thanked UWA for organizing the corporate stakeholders' engagement, saying such development is what the sector requires to register development.

“I want to thank stakeholders for the support you offer because wildlife is very important to our growth and you know our tourism is wildlife-based,” Kiwanda said.

He added that tourism being the biggest foreign exchange earner, it must be supported by everybody.

“We are not a monopoly in this business, if we don’t behave well, we lose the business. Our sector is faced with a lot of challenges and we need more concerted efforts. We need to come together to see how to overcome them,” Kiwanda said.

For his part, Panta Kasoma, a member of the UWA board who represented the chairman, Ben Otto, said it was very important to have such interactions as it will lead to improvement in conservation in Uganda.

"We know as stakeholders you’re out there across the country, you should be our ambassadors as we conserve the environment that is key to our growth. I appeal to management of UWA to listen carefully to suggestions and put them in action," Kasoma said.

The Blue Nile provides 85% Egypt want to go to war with Ethiopia because of that. The corrupt regime of M7 is just fooling around with the Chinese.

By the way, the Nile used to flow backwards during the Ice-Age to Lake Victoria. Clean energy is the future
Report to administrator
0 #12 PaulK 2019-12-01 10:08
If American presidents had the bush mentality and greed of Museveni, then Niagara Falls will have been dammed long ago.

All countries maintain retain key natural attractions for the benefit of future generations.

You would expect that by now Museveni is well exposed from all his foreign travels to know this. I have never seen an unpatriotic and self-centered leader like Museveni
Report to administrator
12