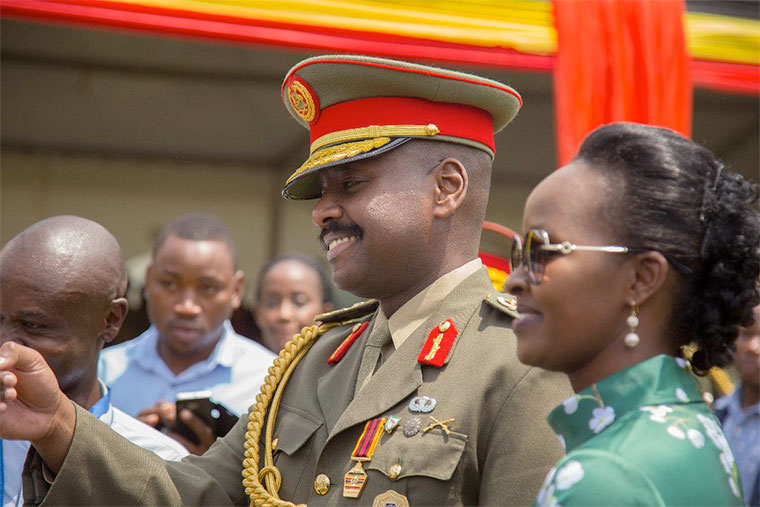 On Monday February 21, 2022, Peter G. Mwesige, a seasoned journalist, shared photos of The Crusader newspapers bearing an interview he conducted with then 23-year-old Muhoozi Kainerugaba in 1997.
In the interview, the first son identified himself as a contemplative person. If one capable of identifying thought intently reads the entire interview, without prejudice, one would see that indeed Muhoozi presented himself as a contemplative individual in the interview.
While replying to me on Twitter, Mwesige revealed that the interview was abrupt: "By the way, the interview wasn't on appointment. I simply drove to State House, Nakasero and asked for Muhoozi. A few minutes later, the gate was opened."
The fact that the interview was an abrupt one justifies further that Muhoozi was truly contemplative as he had no privilege of examining questions before the interview to concoct answers that don't really match his thoughts.
Because with age comes wisdom, Muhoozi must have become wiser than he was at 23 years. Interestingly though, there is a stark contrast between the Muhoozi on Twitter and the one in the interview with Mwesige. An exercise to search for any signs of contemplation in his tweets would certainly end in futility.
Although the tweets qualify as lowbrow ones, we should be very hesitant to conclude that the person behind them is lowbrow too. It would be so biased and quick of us to conclude that a graduate of political science, an active military general, a first son who has spent the most part of his life in State House (alongside Museveni!), a person whom intelligent people are desperate to render PR services, is shallow because of the shallow tweets.
Rather, we should wonder: "What's beneath the tweets that seem to have a consistent pattern of attracting ridicule and outrage?"
When Mwesige asked the 23-year-old Muhoozi to name his heroes. He replied: "A lot of people. People like General Patton(USA), Marshall Montgomery (USA) and Field Marshal Rommel (German)". The interviewer asked him why his heroes were his heroes.
The interviewee replied: "They were brilliant strategists and men with exceptional qualities."
From his answer, one can see that Muhoozi seems to put a good sense of strategy above so many things. A good sense of strategy can make you one of his heroes!
Also, to have the competencies to identify great strategists does not only reflect intelligence in the identifier but also an underlying great sense of strategy in the same person.
It's only a fluent English speaker who can identify another fluent English speaker. So, we should interest ourselves in the possibility of the lowbrow tweets being a strategic block on his much anticipated political career. And if the strategy exists, what's it exactly?
My friend speculated that the tweets could be intended to make his real and perceived opponents underestimate him and therefore discourage them from significantly strategizing against him. If the strategy is such a great one, then it's really worth being ridiculed for.
In a country where Kato Lubwama can be elected into parliament, it's even more encouraging to accept ridicule. Muhoozi may even choose not to make serious efforts to present himself intelligently when the time for serious politics sets in.
Being polished seems to act against the polished in Uganda's politics.
The author is a Ugandan native

He is just an arrogant spoiled brat, because he was born with a silver spoon. He won't last long. The world is now watching his many erratic tweets.

That will determine his political ambitions in the future. Don't be surprised if he is soon banned from Twitter. Only a matter of time.
Report to administrator
+3 #2 Lakwena 2022-03-02 07:48
Thanks Moses.

But the truth is: there is nothing beneath nor above Gen Muhoozi Tibuaburwa's ridiculous and outrageous tweets.

Whatever we say or express and/or act it out; is whatever has been running in our minds. Nothing less nothing more (premeditation).

E.g., including picking the gun and heading into the bushes of Luweero; when on 2th Jan 2017 Muhoozi's tata, told Ugandans and the whole wide world that: he is neither our Servant nor Employee; all along that was exactly what was in his mind.

In other words, by tweeting whatever (ridiculous/outrageous); Muhoozi is acting out his mind.

E.g., when he tweeted that: the arrest and sic torture of Kakwenza should to be a lesson to all those who think they can abuse him on social media and walk away scot free; the guy was acting out his mind and what more he is capable of.

Wachireba?
Report to administrator
+1 #3 Lakwena 2022-03-02 08:06
In other words, thugs are thugs because they are intellectually, ethically and morally incompetent (bankrupt, ridiculous/outrageous).

They are wannabes who cannot accept that they are less intelligent than others, who achieve in life through the merit of the rule of the game/law.
Report to administrator