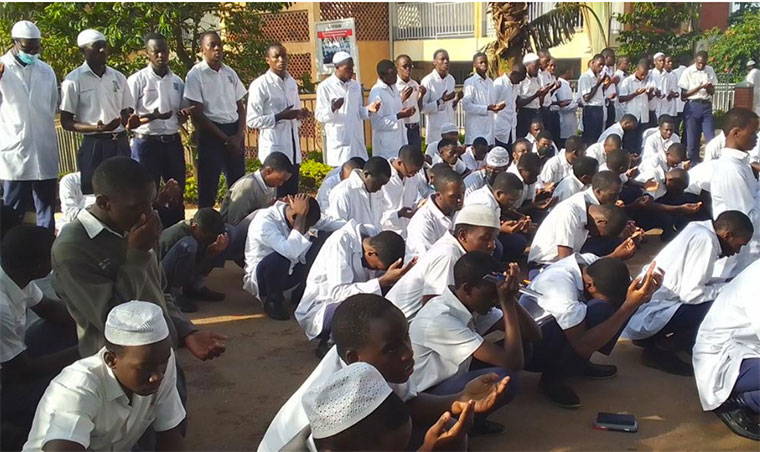 UACE candidates pray before their exams

The Uganda National Examinations Board (Uneb) has marked Kawempe Division in Kampala as an examination malpractice hotspot as the Uganda Advanced Certificate of Education (UACE) exams kick off.

A Uneb official who declined to disclose his name made this remark while briefing scouts who are going to be deployed in the area at Kawempe Police Division headquarters which also hosts the examinations storage facility. This morning all scouts and invigilators who expected to work in the 46 centers in the area were re-briefed by this official and the area supervisor.

The Uneb official stressed that the area is vulnerable to malpractice and warned scouts to avoid being compromised throughout their nearly hour-long conversation.

"This is a hotspot, as evidenced by the prior exams (UCE and PLE). We must keep an eye out for even the smallest details," the official said.

He went on to say that many schools in the area are determined to take any measures necessary to cheat in the exams. He asserted that a certain head teacher had made attempts to bribe the area supervisor with over Shs 15 million.

"I am aware of your meager payment. But let's prioritize integrity. Do not allow yourself to be persuaded by these schools to cheat in exams. Of course, it will be difficult for you if you cooperate with them and are discovered. Top authorities will also personally visit several centers in this region, and head office has added another layer of officials to monitor you," he said.

The official declined to further discuss the matter of attempted bribery and why Kawempe is a hotspot. Jennifer Kalule, the Uneb spokesperson appeared to be green about the matter but promised to avail details as soon as they are brought to her by the field agents.

Several schools in Kawempe have been implicated in malpractice during PLE and UCE examinations. Some of the cases recorded included impersonation where several schools had brought mercenaries to sit exams on behalf of candidates. So far, two cases of this nature have been taken to court and two people have so far been convicted and sentenced with others including headteachers out on bail.

Under the new Uneb Act, invigilators and scouts can be held liable for exam malpractices, especially external assistance, copying, and impersonation among others. Meanwhile, in many places that our reporters have visited across the country, they are reporting a delay in the distribution of the papers which then will translate into a delay in the start.

In Mukono district, unlike during the PLE and UCE, the distribution of UACE papers has been conducted smoothly and on time. Several school head teachers before 7 am had already arrived at Mukono Police Division to pick up examination parcels.

The area supervisor, Constantine Mpuuga who is also the head teacher of Namilyango College School said most of the schools moved according to the planned Uneb program. He advised all the schools to stick to the implementation of all the set Uneb standard operating procedures including those related to Covid-19 and Ebola diseases.

For his part, Uneb chief scout for station 003 Mukono, Moses Karuhanga warned head teachers against distracting invigilators from their work by offering them meals during examination hours. According to him, taking meals requires them to get out of the examination rooms, leaving candidates unmonitored which he said is tantamount to creating space for malpractice.

He noted that several head teachers hide in the guise of expressing hospitality to advance examination malpractices. However, Mpuuga, pushed back on Karuhanga’s assertion arguing instead that the intention is to show compassion to the Uneb officials and that sometimes meals are served at the time when examinations are ongoing.

In Kabale, our reporter reached Kabale police station in Kabale district at 07:42 am and found the container where exams are kept, still closed.  Our reporter only saw two Uneb officials sitting on the verandah of the police station. On contacting them, the officials who declined to reveal their names said they were also waiting for district education officials and security to open the container.

Away from the distribution glitches, schools that have registered candidates expressed readiness for the exams. Bernard Bikorwomuhangi, the head teacher of Kabale Brainstorm High school said that all 285 students who registered have shown up to sit for exams.  He said that so far they have not registered any challenges.

Amon Mwesigye Byaruhanga, the head teacher for Kabale secondary school said that all 43 candidates who registered were present.  Asked why they had delayed receiving exams, he said that they were still filling out forms since it was the first day.

Medard Turamyomwe, head teacher of Nyamweru secondary school in Nyamweru sub-county, Rubanda district said that the sorry state of Bungongi-Nymweru road is increasing the burden of transporting exams from Kabale police station to the school.

Turamyomwe said that as a result, candidates were forced to start exams about 30 minutes past the required hour. Apart from the bad road, all 18 students who registered have shown up for exams.

Elly Maate, police spokesperson for the Kigezi region said that police in the region have so far not recorded any incident sabotaging the examinations. Schools in Mbale had not yet received examinations by 9.30 am. Moses Muhera, the head teacher of Mbale secondary school blamed the delays on late delivery of the examination papers and traffic.

At Nkoma high school, the candidates were still being checked in by 9.00 am in the absence of examinations that had not been delivered. Rodgers Wandulo, the deputy head teacher of Nkoma secondary school says the submission process at the police station was slowed down by the few Uneb officials delivering the examinations.

+1 #1 kabayekka 2022-11-22 00:48
Of course all the parents know very well what has transpired for many of these kids during the miserable lockdown and its repercussions that went on for about two years. Some bright countries have come out all the way to upgrade their kids for further studies.

Their teachers were encouraged to use the history of studies of these kids to recommend them for further studies. Indeed with modern technology these days, modern kids will definitely catch up as universal knowledge becomes easily accessible to humanity!
Quote | Report to administrator
+1 #2 kabayekka 2022-11-22 07:40
It is unfortunate that it is only in this country that the kids are being put on a punishing study exercise and examination that was never there at all in the first place.

Why question students about what you never taught them? Of course as this country stands in terms of rigging national elections, blatant disregard of the administrative laws, corruption and what is else there, Uneb is determined to show off that it is doing a good job out of all the country's misery.
Quote | Report to administrator
+1 #3 Ahmed fahim 2022-11-22 12:03
These are stories from that declined uneb official , he wanted to tarnish the name of kawempe division , why can't he speaks of st Mary's kitende , st Lawrence campuses , other schools in other regions instead kawempe