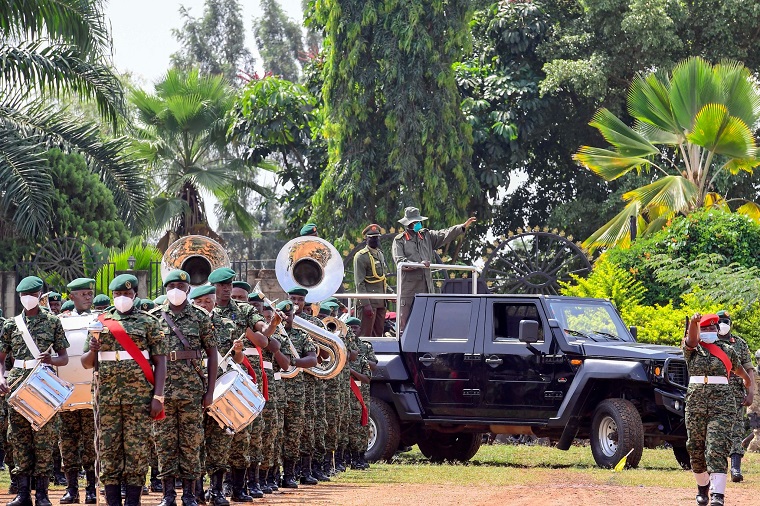 Museveni said that he is aware that many boda boda riders are criminals, but added that he will handle them using different measures like introducing digital monitors that will help in tracking motorcycles.

Tarehe Sita celebrations were under the theme “retracing the roots of the people’s struggle for peace and security for modern Uganda."

The president also used the same celebrations to reiterate his bid to restore wetlands, where he said that government will not use force to get people out of the swamps. He said that he will find time and come back in the region to teach people on fish farming which he said is better than rice farming.

Museveni appealed to the people to go into fish farming, which he said, will enable them get a lot of money, but also allow the swamps to be restored with water and grass which can be used for irrigation and mulching. Vincent Ssempijja, the minister of Defense and Veteran Affairs said that they are emphasizing the training of the UPDF engineering brigade to track the development of the national projects.

He said the activities that the UPDF has been able to carry out in Bugisu and Sebei regions have received overwhelming support from the masses and are good example of a milestone that the country must be proud of. Gen Wilson Mbadi, chief of defense forces said that at house number 49, which belonged to late Maumbe Mukhwana, is where the NRA/UPDF journey started from.

He said the UPDF has effectively supported the civil authority in emergency situation and continuously kept its relations with communities alive. The effect of COVID-19 withstanding, the entire country is experiencing peace from time to time and supporting regional peace in the spirit of Pan-Africanism, he said.

Brig Henry Matsiko, the chief political commissar, said the Tarehe Sita celebrations started on the January 27, 2022. The engineers work started in December 2021 and they put up 23 projects in the region. Most of the projects were completed and handed over.

He noted that in Mbale city, the engineering brigade constructed 2 classroom block at Mooni primary school in one month, a similar structure at Bumayooka primary school in Bududa and construction of a neonatal ward at Kapchorwa hospital and in Sironko, there was also rehabilitation of a foot bridge connecting Budadiri West and East among others.

Museveni always overplay any simple threat to his hold on power. Typically of a natural born coward.
Report to administrator
+1 #2 WADADA rogers 2022-02-06 23:33
Oh gosh, which curfew has he lifted, life has been normal for boda bodas, they were working as and when they wished throughout the lock down. the whole decision does not make difference, its high time Museveni realized that every directive that he makes is defied, people are tied of endless orders.

Now the police will have nothing to eat since Museveni has conceded to opposition pressure to open up every sector of the economy.
Report to administrator
+3 #3 rubangakene 2022-02-07 02:31
Where are these so called engineering brigade?

First they were supposed to have "repaired" all the railway tracks in Uganda 20 years ago, nothing, now kids are still studying under trees; tch, tch and before you know it they will be called to complete the hospital in Lubowa. Kaazi buure tuu!
Report to administrator
+1 #4 Lakwena 2022-02-07 10:01
But compared to some of the Boda riders he is generalizing as criminals, how less criminal is Mr. M7 Tibuhaburwa himself? He is worse because, part his NRA subversion in Luweero included robbing Banks and blowing up Ambulances and UTC buses!

E.g., in all the constitutions of the Republic, including the 1995 one; going to the bush (Rebellion) is treason, a Capital offense at that.

In other words, Shameless Mr. M7 Tibuhaburwa and others went to the bush on 6th Feb 1981.

Therefore, because of the 5 years of subversion in Luweero, Mr. M7 and others are worse criminals than the Boda Riders he is summarily castigating as criminals.

This is because they caused the untimely deaths of hundreds of thousands of innocent Ugandans, and destruction of properties worth trillions of shillings.

Oh gosh, which curfew has he lifted, life has been normal for boda bodas, they were working as and when they wished throughout the lock down. the whole decision does not make difference, its high time Museveni realized that every directive that he makes is defied, people are tied of endless orders.

Now the police will have nothing to eat since Museveni has conceded to opposition pressure to open up every sector of the economy.

Wadada, only fools, idiots, the Political and Palace Eunuchs and sycophants sit to listen to Gen Tibuhaburwa's Directives and/or nonsense.

Otherwise, fed up of lies and deception: Directives or no Directives, the rest of intelligent Ugandans are moving on with their lives
Report to administrator
+1 #6 Lakwena 2022-02-07 10:25
Here we are:

While the AU and the International Communities and/or Organizations are condemning the unconstitutional means to political power, through the current wave of coups in West Africa; the Junta, Gen Tibuhaburwa is celebrating Unconstitutionalism.

In other words, who can still deny that Gen Tibuhaburwa is a 36-year Celebrated and celebrating Criminal, and whoever participates and/or supports him in celebrating Tarehe Sita is a criminal accomplice?

Dr. Apolo Milton Obote grabbed the three important issues together i.e. eradication of poverty, ignorance and disease. This question of "wealth creation" has misguided many Ugandans; if you asked any Ugandan on the street what it entails, you probably will find that most answers will veer towards 'marua' and pork! And oh, a boda-boda, possibly a car with time!
Report to administrator
0 #8 Kalibbala 2022-02-07 23:50
40 years Down the Road it has been Celebrations
of the Self Proclaimed Demi-God called The Curse, Kisiraane and Enemy of Humanity Who is Bent To Rule Uganda for 200 Years after having been here for 150!!

Cases of Massacres and Brutal Torture Of Innocent Ugandans like Kakwenza for Writing Books and Masereka for being a Member of NUP are never matters of Concern!

Ugandans are living in Denial without any Judiciary and The Army and Police being Criminals Housed like Rodents and Fed like Pigs!

The Drunkard Son is bound to avenge for the Father after his tenure!!Other Countries are Enjoying Transitions whereby Ugandans are Begging for Crumbs From the High Table while Shipping their Youth into Slavery to Arabs! Who were the Perpetrators of the Slave Trade!Ani Yatuloga!??
Report to administrator