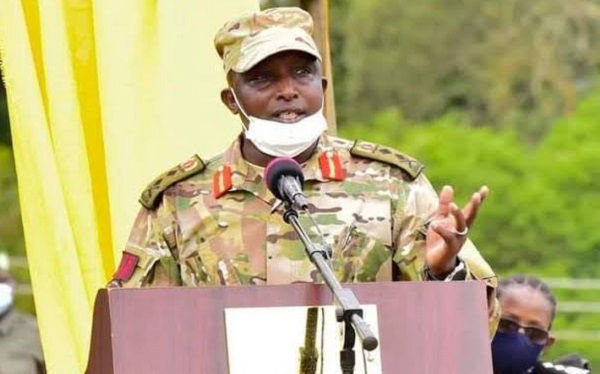 President Yoweri Museveni has appointed Maj Gen James Birungi, as the new commander of the Chieftaincy of Military Intelligence (CMI). He replaces Maj Gen Abel Kandiho, who was last year sanctioned by the United States government over human rights abuses.

Gen Kandiho replacement first emerged mid-last week. But it was later established that the changes had occurred in the Special Forces Command (SFC) where Brig Peter Chandia handed over to Brig Felix Busizoori.

It is reported that Maj Kandiho who was in December last year pinned by the US for being personally involved in the abduction and torture of government critics, has been sent to South Sudan where Maj Birungi has been monitoring on behalf of the guarantors, the assembling, screening, demobilization, and integration of the armed forces.

Before being sent to South Sudan in 2019, Birungi was the commander of the SFC. He had replaced Brig Gen Don Nabasa. The CMI under the command of Kandiho has been in the spotlight for abducting suspects and detaining them without trial for several months.

The US specifically indicated that Kandiho participated in numerous human rights violations and as a result, he was banned from traveling or conducting business in the US. The two-star general and his subordinates have been arresting, detaining, and physically abusing persons in Uganda. The US government added that people were being targeted due to their nationality, political views, or critique of the Ugandan government.

“During these incarcerations, victims were kept in solitary confinement and unable to contact friends, family, or legal support. In some cases, Kandiho was personally involved, leading interrogations of detained individuals,” the state by US’ Office of Foreign Assets Control (OFAC) read in part.

To date, many people arrested by CMI have never appeared in courts of law while others their whereabouts are not known. These include Mike Semudu who was grabbed from Masanafu in Lubaga and John Damulira, who was picked from Kisekka market.

Birungi served as SFC commander from 2019 to 2020 when he replaced Nabasa. Between 2016 and 2019, he served as Chief of Uganda People’s Defence Air Force (UPDAF) when he replaced Col Emmanuel Kwihangana. Birungi was promoted to his current rank in 2019 in February when Museveni promoted over 2000 men and women of UPDF.

+2 #1 rubangakene 2022-01-25 17:33
This is surely an indication that US sanctions actually work; why else would they go ahead and appoint someone else in this position.

Never bite the hand that feeds you, so to speak!
Report to administrator
+2 #2 M!k! 2022-01-25 17:57
Another Muhoozi crony in charge of another crucial department of the army. Birungi is among the 1996 'LDU' crew that Muhoozi personally recruited for traing in Kasenyi.

Many from this group are already in charge of various departments in the army and other security organs.

The Muhoozi project is well underway and proceeding at full speed. However, the removal of Kandiho (wrongly cited as the lead obstacle to the mending of Rwanda-Uganda frayed relations for, nothing happens in Uganda without Museveni's tacit approval/sanction) following Muhoozi's sojourn with Rwanda's Kagame also improves the chances of solving of the problems between Rwanda and Uganda even if Kampala does so as part of the careful chore-graph aimed at making as a Muhoozi initiative/achievement.

Next we are likely to see the Muhoozi image makers shifting more to the domestic front (the weak underbelly of the Muhoozi project beast!).
Report to administrator
+2 #3 M!k! 2022-01-25 18:05
It is even more intriguing that Kandiho's removal and banishment to South Sudan comes after his brother Ambassador Adoniya Ayebare had gone to Rwanda as Museveni's special envoy to meet Kagame.

Both Ayebare and Kandiho are from the Janet Museveni and the Kabonero's wing in the palace politics of Museveni's intrigue laden court.
Report to administrator
0 #4 A K Mukasa 2022-01-25 22:42
If only they had the courage to impose sanctions on Museveni who is the architect of what is going on in Uganda, or his son who revels in the implementation of his father’s diabolical projects, we would not be where we are now.

They are simply treating the symptoms rather than the cause.

They know that without his tacit approval, men like Kandiho, Kaihura etc would not gratuitously abuse their power by killing, maiming, kidnapping real and perceived enemies of Museveni. It is just common sense.
Report to administrator
0 #5 Kalibbala 2022-01-26 00:02
No need to rejoice for Those Rotting in Stinking Safe Houses and Those being battered to Death!

All These Bloody Mongrels are Trained to sustain the Status Quo! Their Sick Mindset tells them that gathering intelligence means Breaking People's Legs and Sodomizing Them!

No Professionalism at All! Uganda like Hitler's Germany of 1933 to 45 is bent to Kill, impoverish and Hold Folks in Concentration Camps!

We saw it in Northern Uganda! Now it is Open! Salim Saleh aka Rufu which means Death is Using Humans as Slaves in his Industries without Pay!

All those Gone missing are Either in Mass Graves
in Kayunga where One Karangwa has Killing Fields!..or Have been Mutilated and their Body Organs removed!!

Wake Up Ugandans It is Never too Late.. They might Kill us But We will Survive!

Even Hitler Murdered 20.000.000 but Israel is Alive..and Supplying Guns for SFC the Notorious Army!..
Report to administrator