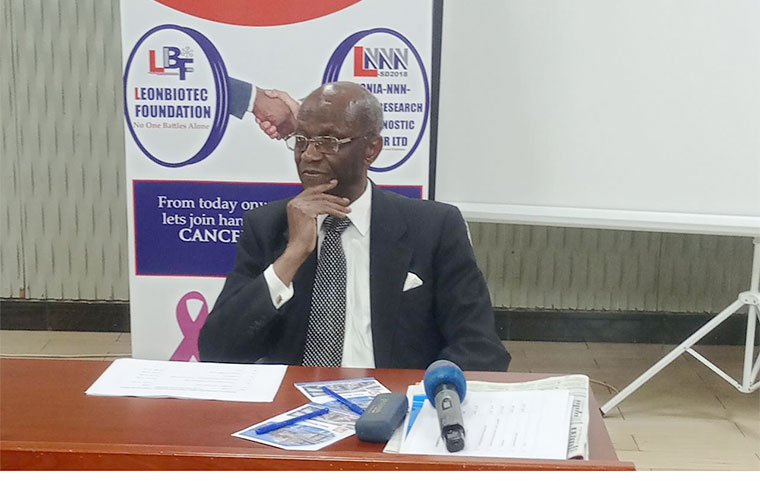 A group of elders has called for quick processing of herbal remedies that have shown progress in treating cancer and diabetes owing to the high and increasing burden of these non-communicable diseases (NCDs) in Uganda.

The elders who have either battled or had close family members who have suffered from the two ailments welcomed a recent move by President Museveni to express support for the development into a drug recognized globally of a concoction made by renowned herbalist David Ssenfuka.

Samuel Wako Wambuzi, the former chief justice told journalists that it’s about time Uganda started focusing on having local innovations in healthcare prepared to standards acceptable the world over since they are proving to work. He was attending a meeting in which the herbalist was unveiling members of the board of LeonBiotec Foundation that was started to conduct research and create awareness about cancer and diabetes.

He said his wife succumbed to cancer and his 9-year-old granddaughter is battling diabetes which is why he is joining the awareness efforts.

Joshua Buyinza the corporate affairs officer at  Leonia-NNN-Diagnostic and Research Centre, which Ssenfuka leads, said elders have joined the awareness campaign as a sign of solidarity that the battle against these killer diseases cannot be fought by trained medics alone but with a mix of expertise and experiences noting that they shouldn’t be mistaken to be against the effectiveness of conventional medicine.

On his part, former parliamentarian and educationist Kasole Bwerere testified that he has taken Ssenfuka’s concoction for a year and feels much better and relieved since before he had travelled to India and Nairobi seeking care for prostate cancer but didn’t get any significant improvement.

Now, he says an MRI scan done recently showed his tumours were shrinking and his energy is now restored.

"Personally I'm a victim of cancer, I was. Ssenfuka has cured me. Secondly 2019 my wife lost the battle because of cancer and, thirdly I remember I was in parliament during the 8th or 9th. There was a very strong proposal by the health committee that we should support herbal and we went very far to propose to government and we wanted the government to enact a law that could facilitate such may be the treatment of cancer mainly. Since I left I have not seen any enactment of the law to that effect," said Bwerere.

While still in parliament he said, they had discussions on proposals that herbal medicine like Ssenfuka’s be regulated and recognized specifying centres where people could find such care. He notes though ever since he left parliament, he hasn’t heard anything more about the proposal.

For now, however, while Ssenfuka’s herbal medicines have received several endorsements by users, they are only being used on a community medicine basis as approvals and tests for mass use by the National Drug Authority are yet to be done. The herbalist is only preparing for clinical trials to test the efficacy of the medicine in humans since animal studies have proved it to have curative properties.

I think before the government waste too much tax payers money towards this herbal concoction, they should fund and staff the health centres so that most Ugandans are able to access health care.

These elders can continue to use the herbal concoction since they all said it worked well for them. They are also capable of paying as evidenced by where they work/worked as opposed to millions of Ugandans who cannot even find pain killers in the health centres.

Most of the functional chronic and non communicable diseases such as HIV/AIDS treatment/prevention, Uganda cancer institute mostly depend on donor fundings and once they stop that, it will be grimed in Uganda.
Report to administrator
+1 #3 Lysol 2022-01-25 00:35
Many Ugandans in the so-called high class are morbidly obese. All of them. Nature will take care of them.

Many Ugandans in the so-called high class are morbidly obese. All of them. Nature will take care of them.

That quack could have saved the life of that banker who died in Kenya.

I hope you are aware that some people still die of malaria even though we have malaria drugs that cure it.

So some people will die of cancer, or any other disease but many more will be healed. I do not know what problem you have with senfuka...but those who have used his drug say it has made them better.

I think that if this guy had a title like doctor or professor you would have believed in his drug....leave the gentleman alone..we have had testimonies of those that his drug has healed...honest citizens who would not lie.
Report to administrator
+1 #5 Akao 2022-01-25 19:44
Quoting Lysol:

Many Ugandans in the so-called high class are morbidly obese. All of them. Nature will take care of them.

That quack could have saved the life of that banker who died in Kenya.

Thats right, they have not gone beyond, if you are doing well you should eat a lot of meat, drink a lot of soda, and sit around most time of the day, hire people to do the most basic for you.

Even the so called educated ones, they take no action in preventative health, when it becomes out of control, then they run functional countries hospitals
Report to administrator