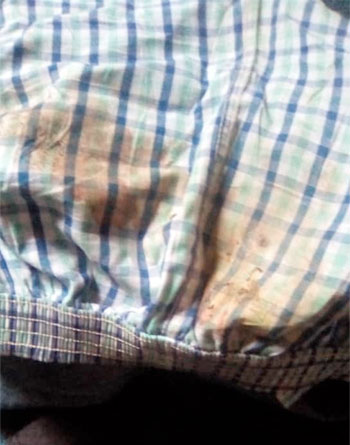 Despite government claims of a healthy and stable Kakwenza Rukirabashaija in detention, his lawyer Eron Kiiza has said the outspoken author of the book Greedy Barbarian has been tortured seriously.

The lawyer said his client has been tortured in the Special Forces Command military base in Entebbe where he has been held incommunicado since he was arrested from his apartment home in Kisaasi, a Kampala suburb on December 28 2021.

Kiiza said Kakwenza has been denied access to his lawyers, family and personal doctor or a chance to be presented in court.

“Kakwenza is in a pitiable condition as has been witnessed by the wife who was present during the guided search of his home conducted today, January 3 in Iganga. He is urinating blood, has swollen legs and blood stains proving that he was clearly tortured,” he said. Kiiza added, “After his home had been searched, Kakwenza was moved from one numberless car to another. They told the wife that he would be arraigned before Iganga Magistrate’s court only for him not to be produced there.”

Kiiza using his Twitter account shared photos of blood-stained clothes and a sheet believed to be Kakwenza’s proving the extent of the torture meted out on the author at the hands of security forces.

In their December 30 application to Makindye Chief Magistrates’ court, Eron Kiiza requested court to authorize Kakwenza’s release from police detention after the mandatory 48 hours of detention.

Speaking to the media, Police Crimes Investigations Division spokesperson Charles Twiine said Kakwenza had on several occasions used his Twitter account to belittle the person of the president and First Son and Commander of the Land Forces Lt. Gen Muhoozi Kainerugaba.

He justified the author’s detention beyond the mandatory constitutional 48 hours, saying the courts had been closed for Christmas holidays.

“There’s no bad faith in having him detained beyond 48 hours. There is justification because the offices were not working yet the courts had to issue a search warrant. There was nothing like abuse of his rights,” Twiine added.

Twiine had earlier dismissed any allegations of torture and said lawyer Eron Kiiza was blinded to the truth by his activism.

On December 28, 2021, Kakwenza tweeted “currently under house arrest. Gunmen are breaking into my house by force.”

At around 4:20 pm, the plain-clothes armed men broke into his house before whisking him away in the infamous numberless drone cars.

The corrupt killer regime should take a note of that. Just set the young man free, and save your face M7 to live another day.
Report to administrator
+4 #2 Uncle philo 2022-01-05 09:59
Despite the large budget and classified expenditure for defense, it is still a shame that our revolutionary, mighty UPDF still believes that torture is still the best method to extract information from a suspect. why can't they invest in better interrogation techniques??
Report to administrator
+4 #3 Zaitun 2022-01-05 17:13
The day is coming when these killers will be searched like grasshoppers all over the country and in foreign countries where they will be seaking help to answer for their cruelty on Ugandans.

I am sure they know how small children hunt for rats that cause havoc to crops and grains. That will be their destiny.
Report to administrator
+2 #4 Mubiru 2022-01-05 17:27
The world always watches with just useless loud mouthed condemnation of murderers as they did to the Rwandan genocide.

Yet these toothless bull dogs did nothing to stop them. Uganda cant be different.

The so called embargos on individual non entity killers by USA are of no effect since many of them never had any need to travel to America the very hypocritical country which condemns criminals and killer gangs and is at the time the main financial benefactor and other donations of the country's in which people are killed and mistreated with impunity.

As long long as these donor countries interests are safe the natives who suffer can go to hell. Another identical hypocrisy is that Ugandans can be called idiots and even pigs which is even taboo to those who regard pigs as evil animals by the very complainants claiming to have been offended by Kakwenzi insults.

This is a world of hypocrisy and not equality or fairness as most people imagine.
Report to administrator
-7 #5 Joe 2022-01-05 17:49
I just read somewhere, that the little guy is paid by Rwanda to "soil" the first family!

With that label say fair well to your loved ones.
Report to administrator
-8 #6 Rwigyema Noah 2022-01-05 17:49
well they say dont enter the kitchen if you cant handle the kitchen.. plus it is blood that builds nations.. you thought removing Mzee from Entebbe would be a bed of roses??

well gakyali mabaga, we just warming up this year is for cleaning up our nation too many rats and filthy stuff all around.. vision 2040 one africa..
Report to administrator
+4 #7 Mulengela Wala 2022-01-05 17:54
I hear certain individuals domiciled in Uganda say to those in diaspora that, Uganda is a country where there is settled enjoyment of freedoms and rule of law prevails over every institution.

Uttered balderdash and naivety. Regardless facts reveal one's innonce, still security operatives would arrest detain beat you prefer charges take you to court get you remanded incommunicado.
Report to administrator
+2 #8 Jama 2022-01-05 18:28
Should we call Uganda a family compound or a family republic, in which a family dominates others and do whatever they want to others.

The children of Israel who were suffering
in Egypt never expected or had no hope for freedom but one day, yes one day for it happens one day , they were unexpectedly freed from the Pharaoh 's captivity.

The world is watching and some international medias have paid attention. The whole gamble will backfire.

The corrupt killer regime should take a note of that. Just set the young man free, and save your face M7 to live another day.

But Lysol, self-confessed criminal like Mr. M7 has no face to save.

In other words like Great Satan, the man comes directly from HELL.

Otherwise, how can anybody with a human soul tell the whole, wide world that he is the King, Author and Master of Violence (Ssebalwanyi)?
Report to administrator