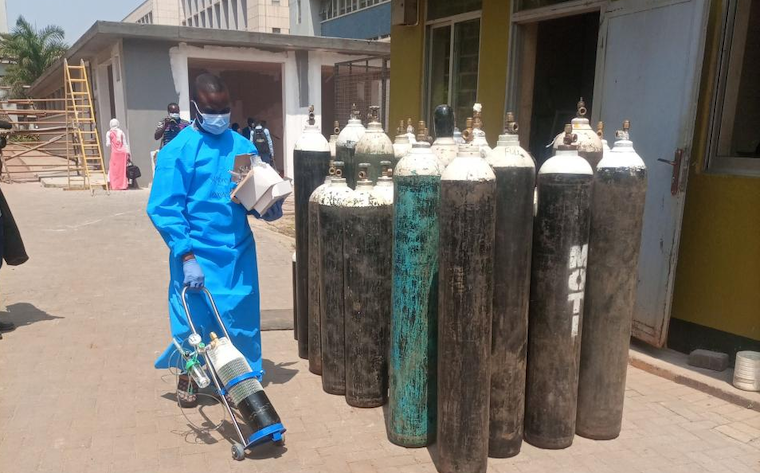 Uganda is appealing for oxygen supplies from the neighbouring countries as the number of people in need of oxygen continues to increase at the various health facilities across the country. Currently, there are 950  people admitted with COVID-19, many of them in dire need of oxygen support.

The country is faced with an oxygen crisis, with many plants at various hospitals breaking down after being overstretched to operate beyond normal capacity.

Dr Monica Musenero, the newly appointed minister in charge of Science, Technology and Innovation said today Wednesday that the government is considering an appeal to save the lives of those Ugandans whose only hope is dependent on the availability of oxygen.

Musenero was speaking just after the ministry of Health announced that up to 49 people succumbed to COVID-19 in its latest test results conducted on Monday. According to the ministry, the deaths are partly due to people’s self-medication with oxygen.

"We're seeking help, there will be official channels if communication has not already been sent to the neighbouring countries to support Uganda with the high oxygen demand. We do not recommend people to use oxygen at home, if you need oxygen, the lowest should be in the auxiliary facility. Any patient who needs oxygen should be at this facility. This attempt for people to use oxygen at home has led to a spike in mortality," said Musenero.

The ministry also reported that of the 7,238 samples tested, 1,110 people tested positive for the viral respiratory disease in a wave that has put a major strain on the health system.

At Mulago Specialised National Referral hospital where the majority of the critical cases are being treated, David Nuwamanya, the principal administrator said they don’t have enough oxygen supplies to cover the bulging numbers and have since opted to supplement their supplies with cylinders from private providers.

The hospital, he said is now quickly constructing a new oxygen plant that should start operating by next week. This is expected to provide an additional 1,000 litres of oxygen per hour to supplement the 2,083 litres per hour being produced now by the four plants already existent in the hospital.

On his part, Dr Byarugaba Baterana, the executive director of Mulago hospital tells URN that people with severe COVID-19 symptoms are arriving late that even oxygen therapy cannot do much to prevent them from dying.

However, as the pressure on health facilities is piling, sections of people are opting to use oxygen from their homes something that Byarugaba says is only a death sentence.

Refuting claims that the hospital was offering cylinders to some big wigs in government for treatment at home, Baterana says by the time one requires treatment with oxygen, it means they are critical and should run to the nearest health facility.

"There are no oxygen cylinders that have been taken from here into people's homes. No, that is not us, I think they are getting them from elsewhere. It would be better for people to use oxygen in a gazetted area not to go and treat yourself at home and then when you're dying then you come. I have seen a number of people including some health workers who were trying to treat themselves at home and they all went to the almighty God." Baterana said.

However, while it's not clear how much oxygen the country requires to fully meet its demand, Mulago hospital administrator says for now they are looking at hitting a target of having a supply of 4000 litres per hour. This too can only be enough if the numbers of critical cases don't continue going up.

-2 #1 Legal counsel 2021-06-16 18:37
I less feel sorry for the people in Uganda. I remember when corona virus started, people in Uganda became so hostile to returnees Ugandans from abroad and overseas.

Despite the returnees vowing to isolate. Now let corona virus grind them. Also the people have been so complacent, not adhering to the SOPs.

In addition, the people send in majority NRM candidates to the Parliament. How return people who used the money allocated for covid cases handling.
Report to administrator
0 #2 kabayekka 2021-06-18 13:20
What sort of politicians are these who are leading this country.

Only recent, these same people were ordering the external countries not to try and interfere in the internal affairs of this country.

They insisted that Uganda had all the powers to defend its territory against any such stupid interference. Now which country is coming out now to assist Uganda, a country full of so much insolence (rudeness)!
Report to administrator
0 #3 Omong Patrick 2021-06-18 15:25
isolationist Ugandan leaders are seeking for oxygen donations from whom????

A company was paid about 7 billion shillings to set up an oxygen manufacturing facility/ factory in Entebbe, is the factory producing the said oxygen, or was that a cash bonanza for connected people?

Now that a prominent Ugandan leader called Ugandas white friends who support this country's budget every year with huge chunks of their own tax payers money "idiots" weeks ago,, is he the same man seeking for donation from them???
a wise person never bites the hand that feeds him!!! Even dogs never bite their master who gives them food, unless they have run mad due to rabies!!!
Report to administrator