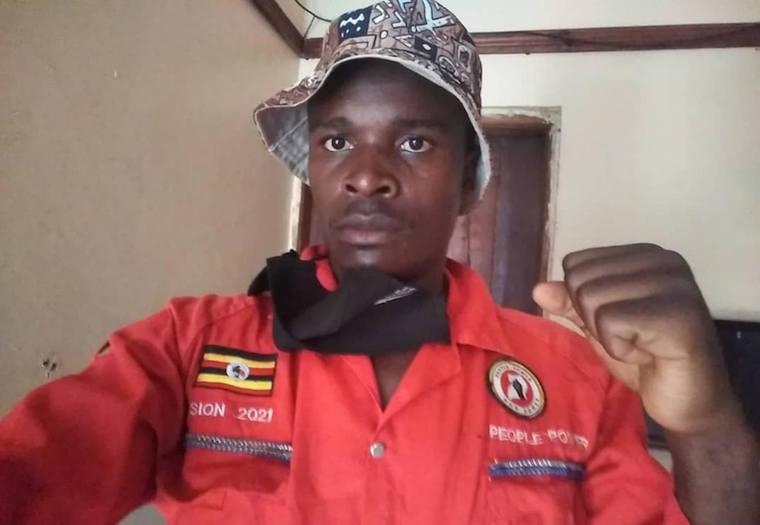 Obicho was among the more than 100 Kyagulanyi campaigners arrested on December 30 last year in Kalangala district. The father of two children recounts an agonizing tale of how he was arrested and tortured for repairing cars on Kyagulanyi's campaign trail.

Obicho says it appears the torturous soldiers had observed him fixing the cars that had been damaged on the campaign trail in Jinja, Mbale and Masaka. When they arrested them in Kalangala, he says he was singled out and thrown into a waiting double cabin car, handcuffed and beaten by men dressed in black while driving him to Kalangala police station. The vehicle arrived at the police station at around 6:00 pm.

He was later at about midnight transferred to Kasajagirwa army barracks, Masaka where he was first taken to the sickbay for treatment. He says he was given pain killers but almost immediately, the beatings resumed.

This time around, Obicho says while he was being beaten by soldiers, at a certain point, six soldiers who were beating him tied a white nylon rope around his neck and started pulling it from either side, asking him to reveal Bobi Wine's Plan B. They were also asking why he works on every car shot at or damaged by security during the campaigns.

"They kept asking where I had been trained," Obicho says, adding that the soldiers were suspecting that Bobi Wine might have taken him to countries like Japan, Israel or Germany for car mechanics’ training.

Obicho says he has been repairing cars for over seven years, working with his father who has a garage along Binaisa road, just adjacent to Mulago hospital. His clients included Bobi Wine's brother Mike Wine and music producer Dan Magic among other Bobi Wine’s close associates. That is how he got connected to the NUP party. Obicho says he observed that the campaign team lacked a mechanic, which he offered free of charge. And his services were willingly accepted.

“I joined Bob Wine’s campaign trail with a mindset of helping our country change from the ruling government,” he said.

On December 31, 2020, Obicho says soldiers brought photographs of him working on the damaged cars. And when he confirmed himself in the photographs, he was immediately undressed and asked to bend and face the wall and beaten once again.

On asking why he was beaten, the soldiers reportedly told him that “Kyagulanyi cannot take over power, you are going to die.”

On January 1, 2021, he says he was made to sleep naked on a cold cemented floor the entire night. He was given back his clothes in the morning and taken to another room where he found several colleagues arrested from Kalangala.

The team appeared in Masaka Magistrate's court where they were charged, remanded over assault of police officers and negligent acts likely to spread COVID-19. But Obicho wonders why they were facing COVID-19 related charges yet in detention centres, about 200 people would be crowded in a single room, sleeping body to body.

When they were remanded to Kitalya minimax security prison, Obicho says his health condition worsened and the soldiers called for doctors in Luzira who brought a mobile scan and found that a large portion of Obicho’s intestines were damaged. He showed us scan images of his damaged intestines.

According to Obicho, the sickbay within Kitalya didn’t have drugs and he had to endure the painful days that followed. He was among the 13 NUP supporters granted bail on February 8. After release, he was taken to Mulago and later transferred Lubaga hospital.

“When I reached Mulago, doctors refused me to eat any food with starch but only fruits like apples and drinks like Lucozade [energy drink] on a daily basis,” he said.

Obicho says his medical bills are being footed by the NUP secretariat.

“I can hardly sit or stand. I can’t even work because doctors told me to wait until I recover so as to resume,” he said.

Rony Samanya, a brother to Obicho, says it is very disturbing and traumatizing to see a young hardworking man who was looking after his wife, kids and parents now become jobless and helpless suffering because of torture by the national army.

“We didn’t know that he had been arrested until his wife told us and now we have to stand in the gap which is costly as well,” he said.

+7 #1 PrinceM 2021-03-09 05:03
But why is Museveni toturing innocent Ugandans? Its beats my understanding thet someone with such a bad heart can pretend to be so good and get away with it for so long
Report to administrator
+4 #2 Remase 2021-03-09 07:06
Fellow Ugandans, what is happening or has happened to Obicho is not limited to him. We are all subject to such acts of M7's tyranny.

The problem is, we have made M7 believe that he has the power to do whatever he wants. That he is the only one ordained to rule Uganda for life.

That's why when BW came on the scene of politics with "people power-our power," the youth believed that it was time to reclaim our power from M7.

Unfortunately BW doesn't look like a revolutionary! That's unfortunate because the Obichos are now left hopeless!
Report to administrator
+4 #3 Omuzira Ente 2021-03-09 09:50
Security needs sober minds.Idi Amin did similar acts in Nakasero followed by Chris Rwakasisi and his Friend Luwuliza Kirunda but where are they?.

We need a national fundraising campaign to meet medical bills of all state toured victims and this bill must be paid back through parliament.

This morning the Minister of internal Affairs was just very happy and laughing at fellow Ugandans who are being abducted by the the state and there way a bouts are not known.

At least the Army Commander came out to save his face by personally apologizing, which appears simple but i be very beneficial to his own children during future regimes. Those like Gen J J Ondong who think that they are old enough to die should know that their acts now will be paid for by their grandchildren in future.
Report to administrator
+2 #4 Remase 2021-03-09 10:03
Unless we gather the determination and the will to overwhelm the fear of M7, we are doomed. M7 won't change but become worse each and every day.

As he gets worse and won't change, he convertes those who oppose and know what autocracy means to his side, using patronage, corruption, nepotism, tribalism etc. Mayiga was once kidnapped and tortured.

C Lwanga was once threatened to be killed. Mutebi was once required to obtain a visa to visit his subjects!

Of which all points to M7 as a tyrant who is determined to kill anyone to cling on power! However all the above are supporting M7 and they are saying, awangale ai Sabalwanyi M7!
Report to administrator
+2 #5 juwait kali 2021-03-09 10:13
And pipo have resumed their usual every day routines as if everything is normal.

Please Buganda/Uganda pipo let's sacrifice six months/one year so we can sort this once and for all.

I know we are going to but let's not prolong it. REMASE I haven't heard you ask/question Tumukunde/Muntu about their way abouts?
Report to administrator
-1 #6 Remase 2021-03-09 10:45
Fellow Ugandans, people like Katikiro Mayiga recently said that, those who are kidnapping innocent people are making M7 look bad, yet to Mayiga, M7 is good and far better than Amin!

To Mayiga, M7 is not the problem but the kidnappers Mayiga, why did M7 kidnap and tortured you? Or better still, why did those you claim to make M7 look bad kidnap, torture and kill innocent people?

Mayiga, I put it to you, you are one of the reason why M7 is still clinging onto power. It's because you are enjoying the comfort zone of being protected by M7's SFC.

However history will judge you fairly we will always remember what you ought to have done. That goes to Bishop C Lwanga too.
Report to administrator
+1 #7 Remase 2021-03-09 12:27
Kali, I hear you loud and clear. How in the world could we continue to act as if it's normal in a tyrant regime?

It's busines as usual and life goes on! You are absolutely right, we need to sacrifice for the good of the future of our children.

Yes Kali, I haven't questioned some, however I keep questioning Mayiga he shamelessly made a U-turn and passionately start supporting M7's life and tyranny openly and using Mengo, the seat of the Buganda kingdom, and/or his position as Katikiro/Kamalabyona!

Do you how that has affected the struggle? Mayiga has made calculated and timely statements that have helped M7 a great deal.

Now, Mayiga is saying that those who are kidnapping, torturing and killing innocent people are intending to make M7 look bad! Thus Mayiga is saying awangale ai Sabalwanyi M7!
Report to administrator
0 #8 juwait kali 2021-03-09 23:06
REMASE the problem with you is that ur jumpy. You did walk 2work and u died instantly.

At NUP we do things with the end victory in mind. Ur a guest just dance 2 z music we provide to you. This is war not kimeza!!!!
Report to administrator