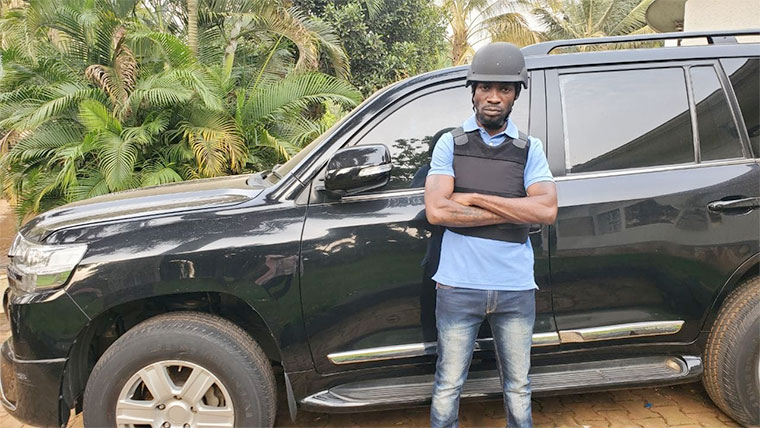 URA insists Bobi Wine's car has to be re-examined

Uganda Revenue Authority (URA) has asked the High court in Kampala to dismiss an application in which Kyadondo East legislator and opposition National Unity Platform (NUP) president Robert Kyagulanyi is challenging a decision to recall his new vehicle for a tax verification process.

The tax body argues that the application filed four days ago is premature, misconceived and amounts to abuse of court process, and therefore it should be dismissed with costs.

On Monday, Kyagulanyi through his lawyers of Wameli and Company Advocates petitioned the Civil Division of the High court challenging a February 24 decision by the URA commissioner for customs Abel Kagumire, asking him to surrender his vehicle registration number, UBJ 667F (Toyota Land Cruiser V8) for re-examination by February 26.

The Commission through Kagumire argued that at the time the car was cleared, it was never brought to their attention that it was actually armoured, and therefore it passed through the system as an 'ordinary car' and therefore under-valued at Shs just 157,925,502.

Kyagulanyi through his lawyers wrote back to URA on February 26 to rescind their decision and after failing to get feedback from the tax body, he petitioned court. The musician turned politician told court that ever since he joined politics especially after the recently concluded presidential elections, his properties including vehicles, have been unlawfully impounded or retained by the government.

As such, Kyagulanyi stated that currently, he acquired the alleged armoured vehicle to use it both as a means of transport and for protection purposes. Kyagulanyi thus asked court to declare the said actions of URA as illegal and in violation of his right to property.

On Thursday, URA lawyer, Alex Ssali and Kyagulanyi's lawyers led by Geoffrey Turyamusiima appeared before the Civil Division judge Emmanuel Baguma to hear an application seeking to temporarily halt the decision of URA until the determination of the main case challenging the legality of the letter in question.

But the judge advised both parties to file written submissions in the case such that he can deliver his decision on April 6 by email. URA had come with a written response by Geoffrey Balamaga the manager in the customs department.

According to Balamaga, the issues raised by URA require Kyagulanyi's full support and participation to have them cleared, but he allegedly wants to frustrate the process. To URA, unless the vehicle is reexamined, the queries raised will remain pending and yet are substantial in nature.

URA further states that armoured vehicles are restricted items under the customs law and the law regulating the country’s defense forces and requires special permission to import and own; thus it would only be proper that Kyagulanyi cooperates with them to clarify and clear the matter as required by law.

"That the applicant was made aware of the preliminary findings that the vehicle was declared at importation as an ordinary one, whereas it is armoured, and that consequently, less taxes were paid thereon. The applicant is at liberty to fully participate in a conclusive exercise, upon handing over the vehicle which would yield conclusive findings," reads the affidavit in part.

URA has also denied the allegations of threatening Kyagulanyi's life, adding that they received his letter which they will be responding to within 30 days from the day it was written.

"...no threats whether verbal or of whatever nature has ever been issued to the applicant by the respondent or staff, and the allegations in that regard are baseless."

According to URA, the High court has no jurisdiction to entertain Kyagulanyi's application as it should have been filed before the Tax Appeals Tribunal.

The URA notes that Kyagulanyi should not fear that his car is going to be impounded forever because the exercise of re-examination can take only a few hours if he is willing to cooperate. But Turyamusiima, one of Kyagulanyi's lawyers said that he's willing to participate in the re-examination exercise if they find genuine unpaid taxes which he's ready to pay.