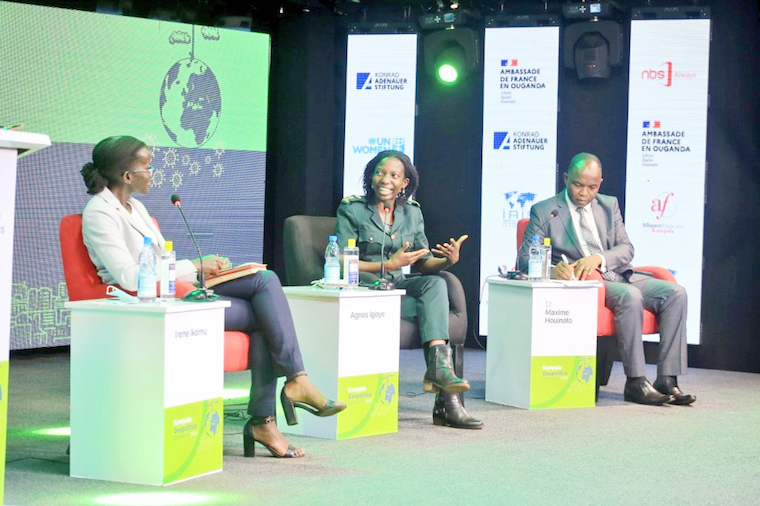 The ongoing Kampala Geopolitics Conference 2020 is an eye-opener in many aspects of life and leadership. Under the theme ‘Geopolitics in the year of the pandemic and beyond,’ the conference has already addressed the issues of Covid-19 solidarity and the anticipated fourth industrial revolution.

However, the most compelling was the realization that women can make the world more peaceful, writes DERRICK KIYONGA.

This is the first sign that there is progress and plenty of space for women to emerge in leadership.  With that in mind, what’s the link between foreign policy, international affairs and gender?

Besides, can women make the world more peaceful, more connected or even more thriving?

Yes, they can, they do and examples of their commitment are countless. This was the final assessment of a panel of international experts that converged at the NBS TV auditorium on October 21.

Not only do women head governments and ministries, rescue their lives on the ground, mitigate the most challenging conflicts and help prevent them, they also inspire and create new role models.

Long gone is the picture of women merely as bystanders in high-level decision-making. And yet, as a field of research and through a scientific lens, it can be argued that gender has not received the attention it deserves.

This leaves public action under-informed of the opportunities of deliberately including women in international affairs. Agnes Igoye, deputy national coordinator for the prevention of trafficking in persons and commandant of the Uganda Immigration Training Academy, says women have to be mentored into leadership positions, especially if they are venturing into spaces they have never because they may feel insecure about themselves.

“It is important to prepare the men to become more comfortable with women leadership so that it is not a threat to them. That we can work in an environment that is not an ‘us versus them’ but also them being acceptable that when women come into the picture, there’s something which they are contributing in that space and if you’re looking that perspective, then there’s a challenge in it,” she says.

Igoye adds that women need to support one another to build a stronger voice, especially in the international spaces where there are fewer women.

“It is easy to think that it is automatic that having women in powerful positions automatically they will support fellow women. Increasingly, there are some women who have gotten challenges from women in leadership who are not lifting up others, and personally I kept wondering how this could be yet we are of the same gender but only to realize that when you’re a minority and you get into a space that you have never been, you feel like you’re floating and special because you’re the only woman in a male-dominated space; so, you find yourself threatened by fellow women coming into that space,” she notes.

“That is why I’m insisting that women need to be mentored on how to manage that space because there are also several challenges that come with such positions including loneliness. Also the more women you have in power positions, the more people get used to this phenomenon. For example, in Uganda we have a woman speaker of parliament; so, now we can associate women with occupying high-ranking leadership positions. So, such deliberate efforts of supporting them when they are high up there and also support in managing those challenges that come within the territory.”

Meanwhile, Dr Maxine Houinato, the head of UN Women in Uganda, observes that there is need to recognize that foreign policy or governance in general is not exacted in a vacuum; it comes in a specific environment, not only specific to Uganda but an environment of gaps for women.

“You have political, economic and social gaps. And we also have to understand that these gaps have underlying factors which are the patriarchy and traditional norms and we know that any policy, whether domestic or foreign, is posed on top of those foundations,” he says.

“As a leader in this position, what has been your experience in terms of shifting the policies to get more women into leadership roles especially at immigration dealing with the some of the most sensitive issues around geopolitics working around refugees, immigration and trafficking? What has that experience been for you as a woman in power and what policies are you making to level the playing field? Some of the deliberate actions taken are flexibility.

For example, around 2016, we recruited about 350 for immigration service and some of the women were pregnant and couldn’t carry through with the physical fitness course to qualify for recruitment; so, rather than chase them, they still sat for the interview and a year later they were called back to complete their training. So, such flexibility is what we do at the directorate of Citizenship and Immigration Control.”

Women continue to suffer from sexual abuse, which reduces their capacity to protect and exert themselves to their full potential.

Igoye says the most depressing aspect about sexual-related challenges is sexual exploitation. “You can imagine during this lockdown, you’ve been hearing the stories and statistics about the many pregnant girls impregnated by their own relatives and people living within the communities; so, you keep thinking who are we as a people and what are we tolerating?” she wonders.

“It goes to say that we aren’t looking at the girls only but boys as well who are sexually exploited as children and there is stigma in that area. Does a girl first need to have a physical pregnancy for sexual exploitation to be taken seriously? Many of the women, upon voicing these incidences at work, for example, they don’t have a right to privacy or the right to say what they want.”

Internationally, there is a growing push to have gender equality and women’s empowerment as central to national security, diplomacy, defense, aid and trade. The push is to reshape foreign policy to have a more feminine policy by promoting more women’s leadership, more commitment to policies that advance that leadership and allocating more resources in a manner that advances that commitment.

Dr Houinato says that at the international level, there is need to consider how poverty and vulnerability of women affect leadership.

“The question becomes ‘how do we integrate that into foreign policy and into shaping geopolitics?’ Today geopolitics is divided in two main areas; aid and trade. How are women positioned in terms of enjoying international aid and trade?”