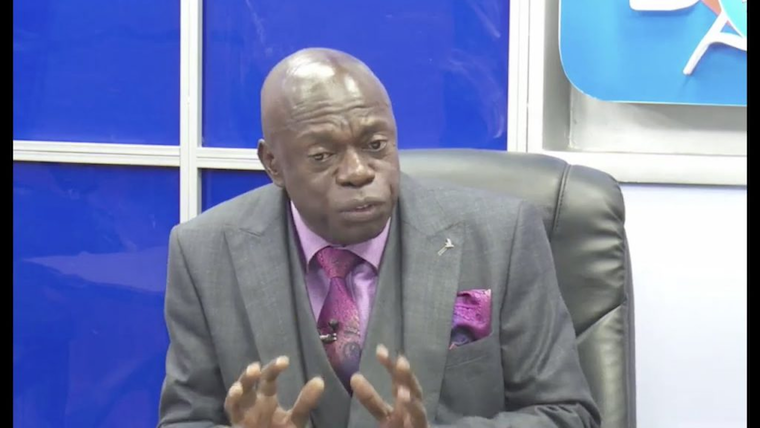 Mivule was arrested today Monday shortly after his TV show by crime intelligence and CID team donned in plain clothes. He was led to CID headquarters at Kibuli from where he recorded a statement at the electoral and political offences desk.

CID spokesperson Charles Twine said Mivule has been inciting the public through his TV shows and via his social media accounts. Besides, CID accuses Mivule of promoting sectarianism using his social media pages.

“Based on what is in the clips he has been circulating on social media, he promotes hatred. We are making some inquiries from him and if we the DPP (director of public prosecutions) finds that there is a case he must answer, we shall arraign him in court,” said Twine.

Mivule on Sunday said he had been summoned by the director of crime intelligence, Brig Sserunjogi Ddamulira for interrogation on allegations of promoting sectarianism. The former Akaboozi Radio (Radio Two) journalist, in one of his recordings, mentioned that the top security chiefs all come from the same region.

While being arrested at Baba TV offices in Ntinda today, Mivule said he is not a coward, insisting that he will forever speak his mind and about what he thinks should be done right. Mivule claimed that what he speaks about are issues affecting common people and a replica of what transpired in the regimes of former Presidents Idi Amin and Apollo Milton Obote.

“I am not a coward. What I have in my heart is what I speak. You cannot say you have brought fundamental change yet what you are doing is what we witnessed in Amin and Obote's regimes,” said Mivule.

Twine said charges to be slapped against Mivule will be determined by the DPP. Mivule is the latest suspect to be arrested on allegations of promoting sectarianism following the arrest of four Bizonto comedians and Radio Simba presenters last week.
Julius Sserwanja also known as Kidomoole, Mbabaali Maliseeri (Uncle Luyuguumo) Sssaabakaaki Peter (Omuzinyuuzi) and Gold Ki Matono, also known as Opeto were arrested from Radio Simba on Friday morning by armed personnel over their social media post in which they urged Ugandans to pray for the prominent leaders holding the country together.
In the video, they mentioned the top prominent persons in the police, army, intelligence Uganda National Roads Authority, Uganda Revenue Authority, Electoral Commission, Bank of Uganda, National Social Security Fund among others.
The comedians were set to be formally charged in court today but were a no show at City Hall. Other artists have since ganged up in solidarity with the Bizonto comedians, releasing even more social media videos in which they mockingly attribute prominent leaders in the country to different regions across to imply regional balance. The artists like other human rights defenders and activists have asked government to release them unconditionally.
Similarly, local musician and Kadongokamu singer, Gerald Kiwewa was also arrested over his song, Nantaba with police claiming Kayunga Woman MP Idah Erios Nantaba had raised a complaint.
However, Nantaba has since denied filing any complaint before the police, accusing the law enforcers of dragging her "name into their mess."
Government spokesperson Ofwono Opondo warned media houses and the general public that government is going to be very firm and decisive in dealing with those promoting sectarianism because Uganda has a history of tribes killing each and that enough lessons had been learnt from neighbouring countries.
"We want to implore you the media, and the politicians that the government is going to be very decisive, very firm with anyone resurrecting sectarianism tendencies," Ofwono said.
"We should not judge you by the tongue that you speak but by the content, quality and service that you provide to Uganda where you’re deployed. When Mr Enanga [police spokesperson] or a police officer enforces the law with even hands, it doesn’t matter whether that police officer is a Munyankole, Mukiga, Japadhola, is a Lango. Our own history demonstrates that we had tribes killing tribes mates. When those Amin soldiers misbehaved, did they leave the people of Arua? They did not spare them. When the Acholi officers and men of the UNLA raped and vandalized or looted, they did not ask the tribe of the owner of the shop. They just looted." Ofwono added.
Ofwono further said the leaders in security are giving ultimate sacrifice that very few Ugandans are willing to give and hence should be judged by their works and not the regions from where they come from.
"Our officers, particularly those who are serving in security services, they are giving the ultimate sacrifice that very few of us can dare give. And therefore, when they have responded to the call to defend the country, it is not proper to malign them," he added.

My nane is Twine Omugisha !

Notorious Robbers Army Killed 2.500.000 Ugandans in Luweero to claim Power and Glue themselves on Ugandans Hook and Crook..No case to Answer..The Almighty from Butare Colonised You..Only People From One District can Be Trusted to Plunder the Treasury,Kill and Maim..

The Rest of Ugandans have all Rights to Wake Up and Do the Same by Hitting Back! in Runyakitara we say Kubirabe ebyo kushiisha Tweena Ka tushiishe..meaning "If it is All for Spoils let us All Spoil...#Free Basajja Mivule Unconditionally..
Report to administrator
0 #14 sn 2020-07-28 20:34
Quoting A K Mukasa:

What a load of nonsense from OO. What ultimate sacrifices have the security agents given? OO is simply a mercenary and therefore he will say anything that his paymaster wants him to say whether it is right or wrong.

This law was crafted by Museveni and his accomplices in order to gag people who raised legitimate queries in respect of the blatant tribalism they were planning to inflict on Uganda.

Such a law should have been enacted to be used as a shield not a sword. However, they are now using it as a sword to stop anyone from pointing out the elephant in the room. What a travesty.

MIVULE is very right. What he talks about is the reality in Uganda. You cannot accuse him of inciting the unincitable people of Uganda.

The government of m7 is long overdue for removal. So many state sponsored crimes have taken place as m7 watches. He sanctions these crimes and that's why he never stops them. Why should anyone love his regime?

In other words Kayumba, Kaka locks up hundreds of other Ugandans in Safe Houses and torture life and the hell out of them. But the victims and family member are not suppose to complain.

Should they and other Ugandans complain, the accused of hate crime and also arrested, indefinitely without trial locked up and tortured.

Can you imagine: a head of state referring to a section of the citizens as baboons (less human)?

In other words, worst than the Brits colonialists; Mr. M7 is the most inhuman, nasty, prejudice, a begot, tribalistic and sectarian leader Ugandans have ever had.

E.g. how can the president of a country boastfully talk about crashing his own countrymen/women?
Report to administrator
12