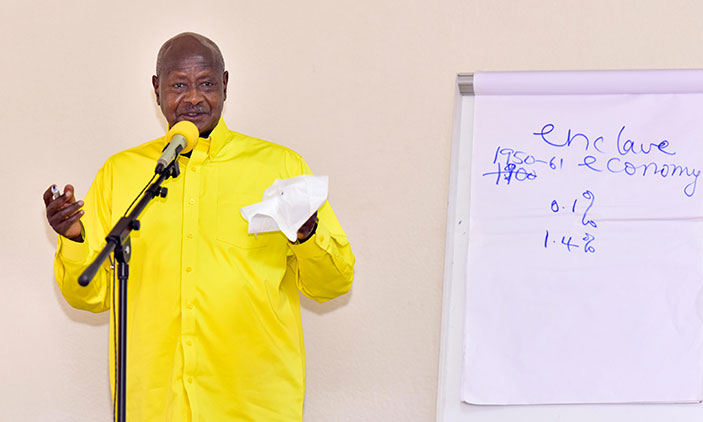 Last week, the Constitutional court threw out a constitutional petition filed by eleven NRM MPs challenging the February, 19, 2019 resolution passed by the party’s Central Executive Committee (CEC), which installed President Museveni as the sole candidate of the ruling NRM in the 2021 presidential election.

The court delivered a 3-2 majority ruling and DERRICK KIYONGA analyses the grounds the justices leaned on to deliver the ruling. Three justices; Alfonse Owiny-Dollo, Cheborion Barishaki and Christopher Madrama, who wrote the lead judgment, threw out the petition because it didn’t have any solid issue for constitutional interpretation.

They subsequently advised the petitioners to file their case in the High court, which would perhaps grant them remedies they sought.

Nevertheless, Justice Fredrick Martin Egonda-Ntende begged to differ. He said he was satisfied that the MPs had raised a couple of questions, which merited constitutional interpretation. Though he said he is aware the MPs could have sought certain remedies through the NRM structures, the Electoral Commission and the High court, it doesn’t, in any way, deprive them of their right to raise, as they did, questions for constitutional interpretation to the court.

“The choice remains a choice to the petitioners to determine which avenue they travel,” Justice Egonda-Ntende, who doubles as the chairman of the Uganda Law Council, ruled. “It is not for this court at this stage or the respondents [NRM] to say the petitioners, ‘you have another avenue to ventilate your grievances. Take that other avenue.’”

The petitioners led by Theodore Ssekikubo, the Lwemiyaga county MP, challenged the resolution saying it contradicts both article 71 (1) (c) and 99 (3) of the Constitution.

Justice Egonda-Ntende first resolved the question as to whether the sole candidate resolution is in line with Article 71 (1) (C) of the Constitution. The article states, “The internal organization of a political party shall conform to the democratic principles enshrined in this constitution.”

One of the democratic principles enshrined in the Constitution, Justice Egonda-Ntende said, is the requirement that all people of Uganda have access to leadership positions at all levels subject to the Constitution. This presupposes according to Justice Egonda- Ntende that there will be both choice and competition for leadership positions at all levels in the party,

“Ring fencing a position for one person, without choice and competition, and barring access of other interested Ugandans in a position of leadership, such as a presidential candidate, would run counter to the constitutional requirement of access by all Ugandans to leadership positions or facilitates such an occurrence would be inimical to this democratic principal.

“Justice Egonda- Ntende ruled adding that ring fencing might be permissible for traditional rulers but is clearly, in his view, inconsistent with the democratic society being built in Uganda.

After that exploration, Justice Egonda- Ntende concluded: “I would therefore find that the respondent [NRM] organs acted in violation of article 71 (1) (C) when they decided that President Museveni shall be the sole presidential candidate for the respondent [NRM] for 2021 elections and beyond.”

Museveni chaired the meeting, which passed the sole candidate resolution at Chobe Safari Lodge. Nevertheless, the petitioners insisted that in doing so, he violated his duty under Article 99 (3) of the Constitution. The article necessitates the president, inter alia, to abide by, uphold and safeguard this constitution and the laws of Uganda.”

In his nine–page judgment, Justice Egonda-Ntende said that whilst he takes it that Museveni was chairing the CEC in his capacity as chairman of the NRM, and not as the president of Uganda, that isn’t enough.

“But can it be said that at any one moment he is able to shed off his responsibilities as President of Uganda, and therefore assert that he was not in violation of the duties attached to that office?” he asked.

“I think not. In whatever position he may he act he remains the President of Uganda, and must ensure that those other powers he may enjoy or exercise, don’t come in conflict with his duties as President of Uganda. This is an ever present or enduring constitutional duty enshrined in article 99 (3) of the Constitution that must be obeyed at all times.”

The article provides that constitutional petitions should be heard and determined as soon as possible, and where necessary, suspend any other business in order to achieve the expeditious disposal of constitutional matters.

“This particular matter was heard on October, 1, 2019, and has taken over 9 months without determination, during which the panel members of the court, were engaged in the hearing of other matters, including civil and criminal appeals. Maybe this approach to business distribution in the Court of Appeal/ Constitutional Court could have contributed to the delay in determining this matter after hearing. In my view this court is eschewing its duty of expeditious disposal of constitutional matters, including the one at hand,” Justice Egonda- Ntende ruled.

Though he agreed to dismiss the petition, his reasons were different from those of Owiny-Dollo, Barishaki and Madrama. Kakuru, in his three-page judgment, said that the petitioners had filed their petition hastily.

“The process of determining the NRM Party’s presidential candidate for 2021 general elections from the facts before me, is still ongoing and appears to be far from being concluded,” Justice Kakuru, a renown maverick, ruled. “I’m not satisfied that the petitioners have proved that the said process had been concluded at the time this petition was heard, in order for me to determine the constutionality of the acts complained of.”

Justice Kakuru agreed with dissenting Justice Egonda-Ntende that the Constitutional court has jurisdiction to hear and determine the constitutionality of the acts of political parties or the provisions of their respective constitutions.

“I would for the above reasons decline to strike out this petition on account of lack of jurisdiction by this court,” he said. “However, I would dismiss it for lack of merit, the petitioners having failed to prove what they set out in their petition.”

Forward National Resistance Movement.Neera,neera,neera,paka last,paka paka!!Joana give me hope,Joanna give me hope!!!!
Report to administrator
+1 #4 Lysol 2020-07-08 19:44
Those judges understand M7 mobid fear of being challenged by someone for his hold on power.

There is nothing worst than fear itself. It can kill someone.
Owiny understands M7's weaknesses very well.
Report to administrator
0 #5 Lakwena 2020-07-10 14:20
In other words, just like Mr. M7 is; these Judges are unjust.
Report to administrator
0 #6 Remase 2020-07-10 17:52
Because M7 is the one who gave them a job. Owinyi Solo kept shouting during togyikwata ko hearings in Mbale that that was not about politics!

But while reading what he wrote, it was as if he had empafu in his mouth. Just like everyone of them, especially Elizabeth Musoke, couldn't read what they wrote! That goes to show you that their judgements are orders from above.
Report to administrator
0 #7 Remase 2020-07-10 18:04
Fellow Ugandans, we don't have an independent judiciary, we have judges employed by M7.

You watch when they are reading their judgements, it's as if their mouths are full of marbles!
Report to administrator