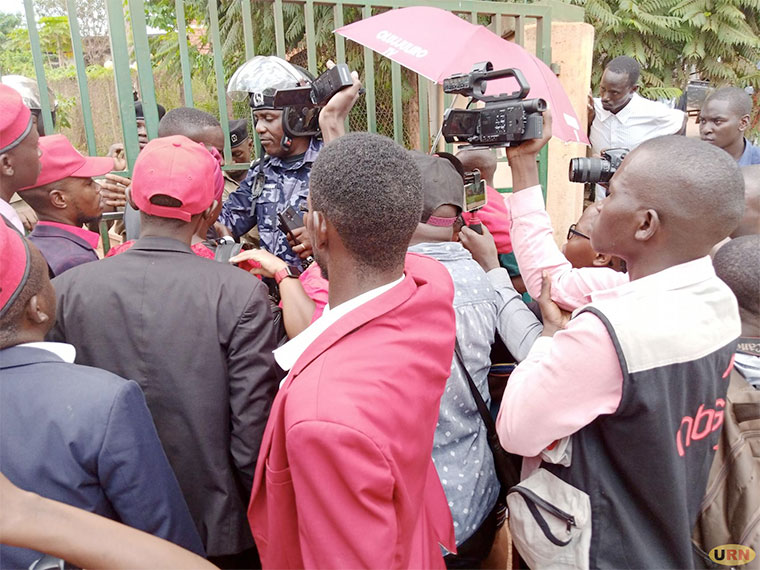 There was chaos in different city suburbs on Monday after as police battled People Power activists protesting the death of their colleague who was reportedly knocked by a police patrol vehicle.

Ritah Nabukenya, 28, who was commonly known as Priya in People Power circles was travelling on a boda boda on her way to attend a consultative meeting by their leader, Robert Kyagulanyi alias Bobi Wine in Ndeeba. She was allegedly knocked by police patrol vehicle registration number UP 4841 around Nakawa market.

The deceased’s sister, Prossy Namaganda says Nabukenya was returning from Mukono-Seeta in Mukono when she was knocked.

“She called in the morning and notified me that I should pack for her some People Power clothes, which she was to wear before joining her colleagues,” she said.

Namaganda however, says that she was called only to be told that her sister had been knocked by police and admitted at Mulago national referral hospital.

“By the time I reached Mulago she was still alive and in pain. She couldn’t say anything. I watched her breathing her last,” she told URN with tears rolling down her cheeks.

Nabukenya’s death spread on social media shortly after it was shared by Bobi Wine on his accounts.

“Yet again, our supporter and leader in the people power movement has been run over and killed by police. Nabukenya Rita was on her way to Kampala on a motorcycle when police spotted her and ran after her…,” read the tweet in parts.

The tweet came out at the time when several people power supporters were moving from Buganda Road court, where their principal had gone for trial against social media tax. Some of the rowdy youths changed their course and moved towards Mulago hospital.

They staged a protest at the City mortuary demanding for the deceased’s body but police couldn’t let them inside leading to running battles at the hospital. The protests spread to neighbouring Kubiri, Kavule, Mawanda road, Kalerwe and Bwaise within a very short time.

“Release her body, we want it,” the youth chanted in unison as others accused police officers of being used as killing machines to suppress them. The protests paralysed transport and business in the affected areas. A yet to be established number of youths were arrested by police.

Although People Power supporters claim that the deceased was intentionally knocked, police have refuted the allegations. The deputy Kampala Metropolitan Police spokesperson, Luke Owoyesigyire, says the boda boda, which was carrying the deceased tried to overtake the police vehicle and ended up colliding with another motorcycle.

“It was the patrol vehicle that rushed her to the hospital. We have gotten to learn that she succumbed to the injuries sustained during the accident and passed on,” said Owoyesigyire.

Owoyesigyire notes that police has started investigating the matter by recording statements from eyewitness and the officers who were on the police vehicle. He also says they intend to retrieve CCTV footage to confirm what exactly happened.

12
+1 #11 Odongkara 2020-02-25 14:13
Nobody has the monopoly of the gun. Politically wounded Ugandans can as well go to the bush just like Museeni did, and fight Museveni and his NRM regime no matter how many lives are lost or how long the fight lasts but surely Museveni can be fought and squarely defeated.

However the lingering question is why must we always change the presidency violently? This is the reason Museveni will NEVER peacefully relinquish power because he got through violence.

The ballot box will NEVER deliver Uganda from Museveni's jaws. Only the AK47 bullet boxes that can.
Report to administrator
0 #12 Ugthinker 2020-02-25 23:09
Quoting R Katumba:

Dr Besigye has told Ugandans over and over again that we need to be organised and led. Whoever you honks that Museveni will be overwhelmed by uncoordinated demonstrators is a JOKE!

How different is Besigye's organisation from that of people power if I may ask?