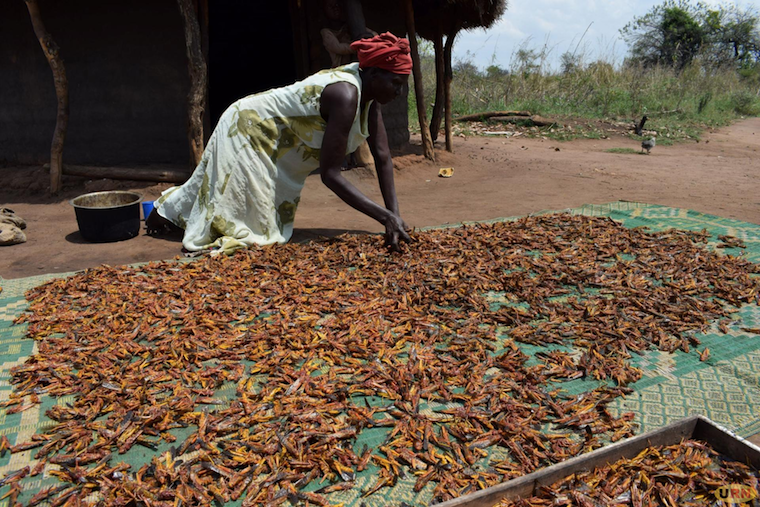 The state minister for Agriculture Aggrey Bagiire has cautioned Ugandans against eating of desert locusts, saying they have been sprayed with poisonous chemicals capable of causing health complications and even death in humans.

The minister issued the warning during an interface with the media in Nakapiripirit in northern Uganda following reports that residents in parts of Acholi, Teso and Karamoja had turned the migratory pests into a delicacy.

Logwe Logira, a resident of Moroto district said that desert locusts are edible like grasshoppers, a seasonal delicacy for many communities across the country. Paul Longole, another resident from Moroto said that the locusts were eaten in the 1960s when they last invaded Uganda.

The minister, however, assured the public that the government has taken all safety considerations on the environment and, agriculture and public safety during ongoing operations to eradicate the locusts out of Ugandan territory.

Recently, Dr Muo Kasina, the chairman of the Entomological Society of Kenya has said the locusts are rich in proteins and advised Kenyan nationals to dry or fry them for purposes of nutrition.

“These locusts are edible and besides the aerial spray that the government is doing, people should start harvesting them and eat them with ugali [posho]. They are rich in proteins which is a constraint in the country,” Mua is quoted saying by the Kenyan press.

The same breed of locusts is reportedly eaten in Israel, where they are breaded and fried or covered in molten chocolate to create a ‘healthy and tasty’ snack.

+2 #1 Kabayekka 2020-02-22 18:55
This is what we have all been saying as this authority has been spending tax payers money to chemically wipe out these natural edible locusts.

How then is this official going to prevent aggressive birds and other wild animals and snakes not to eat poisonous locusts?
Report to administrator
+3 #2 Lysol 2020-02-22 20:59
They are dangerous, because they used outdated and unsafe chemicals to kill them.

Those poor people which the regime has neglected for years have no choice but to eat anything in order to survive.

And yet the regime always tries to export low quality food and dairy products to other countries.

From, sugar and milk to Kenya and now encouraging local farmers to export corn (maize) to Zimbabwe. Not to mention that joke about exporting beef to the UK.

Always feed your people first, before exporting the surplus to other countries.

The USA has only 2%%of its populations of over 360 million in farming and yet can feed the whole population, with the surplus exported to other countries like China. Its food reserved can feed the whole world for at least 30 years.
Report to administrator
0 #3 Lakwena 2020-02-25 08:15
Are the folks picking dead locust or the live and kicking ones?

In other words, after the lethal spray, how long does it take for the locust to kick the bucket?

Otherwise it is unlikely that after the deadly spray the locust would still have the gut to fly away to a distant location.
Report to administrator