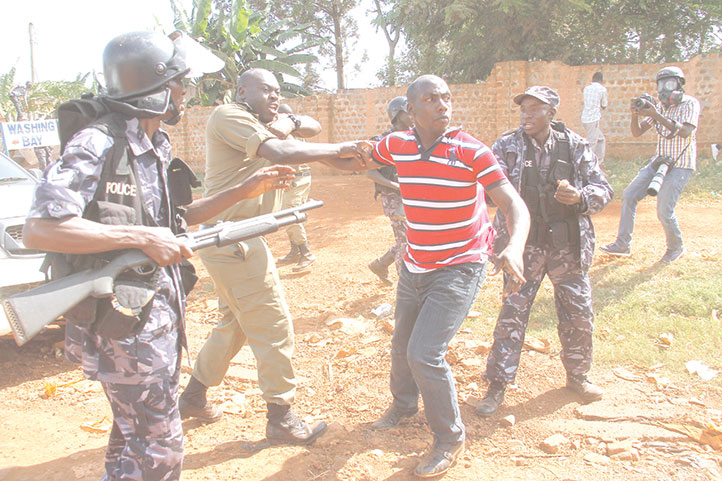 FILE PHOTO: Christopher Aine being arrested by police in 2015

There was commotion in Kampala city center this morning when Christopher Aine, the former bodyguard of the ex-prime minister, Amama Mbabazi staged a protest over being jobless.

Aine, who was accompanied with two others, was holding a sharp knife, saying he is unable to fend for his life. Police swung into action and grabbed Aine who shouted that his parents and relatives died because of President Yoweri Kaguta Museveni.

"Our parents died, our parents were killed to bring this regime into power yet Museveni is not letting go, and we're not benefitting from this regime. [Police] officers get out of here. We need a change of this regime." he shouted.

Aine’s other two colleagues accused government of corruption, saying Museveni is surrounded by mafias. They said they are leaders for peace and are launching their campaign for regime change.

"Nothing is done about corruption, it is a matter of parading people because we know…the people who are taking money, most of them are from the first family. Saleh[Museveni's brother] is the head of the mafias, most of the people sitting around him are the people swindling money from the government, from government agencies. Enough is enough. We, the leaders of rise for peace we’re launching our revolution today and we’re saying enough is enough." said Aine.

Kampala police spokesperson, Patrick Onyango, said preliminary investigations show that three took to the streets because of money. Onyango said, Aine and his colleagues have been seeing 'other' he did not mention getting money from the state and that they are also trying to draw the attention of government so they can be paid. Museveni and his NRM party have been on an over-drive recruitment exercise of all and sundry previously considered as members or sympathizers of the opposition. Some, like Full Figure, Buchaman have been rewarded with advisory posts, new vehicles, money and bodyguards.

Aine and his colleagues were arrested from Constitutional Square and taken to Kampala Central police station. Onyango cautioned the public against staging unlawful protests, saying must channel their grievances using appropriate procedures.
Who is Aine

Aine shot to the limelight in September 2015 as the bodyguard of the then-presidential candidate, Amama Mbabazi when he wrestled down Busoga East regional police commander, Edgar Nabongho and his guards.

He was later arrested on then police boss Gen Kale Kayihura’s orders, who described Aine as a UPDF deserter who had gone on to be a ‘commando’ in Iraq.

But Aine, who headed Mbabazi security detail, later told The Observer in 2015 that he once belonged to President Museveni’s elite Special Forces Command (SFC), which he quit over alleged marginalisation.

Aine said he was born in 1982. His father, Maj Julius Aine (RIP), was one of the 41 NRA rebels that launched the maiden attack on Kabamba barracks on February 6, 1981. Registered as RO/00044, Maj Julius Aine is reported to have died in the 1990s in a motor accident - although this cause of death is disputed by some family members.

On the campaign trail on December 4, 2015, in Pallisa, Aine told The Observer that after his father’s death, he was recruited in the army and seconded to the SFC. He said he was the only one in the family who was allowed to see his father’s body. Because of his father’s contribution to the rebellion that thrust Museveni into power, Aine expected his family to be treated better.

But, with a marked tinge of sadness, Aine said Museveni “forgot” them. When he realized that being in SFC didn’t better his family’s welfare, he opted to quit. But, he said, he was dissuaded by the then Chief of Defence Forces Gen Aronda Nyakairima (RIP), who arranged for him to meet Museveni.

The meeting, he said, happened on February 6, 2007, the day Museveni unveiled the ‘Freedom Fighters Monument’ at Kabamba Military Training School, erected in honour of the first 41 NRA fighters.

“I didn’t have a uniform and I was forced to borrow a uniform from one of the SFC soldiers on deployment because there was no way I was going to meet the Commander in Chief [CIC] without uniform,” Aine told The Observer.

Many high-ranking soldiers questioned his presence, a non-commissioned soldier, among generals. But Nyakairima, according to Aine, told the overly-inquisitive officers to back off.

Museveni himself, according to Aine, wondered who the low-ranking officer was seated among senior officers. After Nyakairima introduced him to the CIC, Museveni offered to address the concerns of Aine’s family. Aine ran out of patience after a year of waiting and began planning his exit from the army.

“I had saved about Shs 8m which appeared enough for me to start a new life. I then quietly began on the process of my discharge from SFC; it is a lengthy and difficult process,” Aine said.

“That is why Kayihura said at my arrest [in September 2015] that I was a deserter in the army – in fact it is the charge that he had wanted to slap on me but was surprised when he discovered that I had all the discharge papers,” Aine added.

Josephine Mayanja-Nkangi, the then Go Forward head of media and communications told The Observer in January 2016 that Aine joined the pressure group in July 2015 following Mbabazi’s arrest at Njeru on his way to Mbale to launch his presidential bid.

“The events leading to Mbabazi’s arrest at Njeru brought him; he felt that he [Mbabazi] should have never been blocked,” Nkangi said.
“He went back, mobilized his friends and assembled that security team,” Nkangi said.

Aine said that on leaving SFC, he secured a five-year contract job with “the Americans” as a security officer. He says that contrary to Kayihura’s claims, he has never worked in Iraq. Instead, he spent most of his time in Latin America.

According to him, he was getting a monthly salary of Shs 11m, but he resigned to join Mbabazi because he felt Museveni had betrayed the country. Before Mbabazi went public about his presidential bid in June last year, Aine said he had been part of the former prime minister’s silent mobilisers.

At the time, Aine came across as a reserved and quiet man. Before his leap into the limelight, Aine always humbly ushered in guests at Kololo to meet the former NRM secretary general.

His true character of a fierce fighter was exhibited in September 2015 when Mbabazi was teargassed in eastern Uganda as he set out to popularize his presidential bid.

In Jinja, Aine fought off a group of armed policemen who wanted to arrest him and when they finally did, he somehow got off the police truck that was taking him to Jinja police station and rejoined the Mbabazi team barely two hours later.

Asked by a journalist how he had left his captors, Aine retorted: “Bino bireke tojja kubisobola [Just leave that; you will not understand].”

Following that debacle, Kayihura turned the heat on his police officers for allowing to be manhandled by Mbabazi’s commando-like guards. Days later, Aine was arrested in Kampala, and although initially, police denied knowledge of his whereabouts, he told The Observer that he had been detained in Nalufenya prison in Jinja.

He was later taken to court in Jinja on assault-related charges.  He was alater entangled in a scuffle between National Resistance Movement (NRM) supporters and those of his boss in Ntungamo district. Police declared him a wanted criminal forcing him to go into hiding.

Later photos emerged on social media indicating that Aine had been killed by state agents and his body dumped at Mulago hospital morgue. His relatives visited the morgue but did not find his body. Aine resurfaced at the home of President Museveni's brother Gen Salim Saleh claiming he had been hiding in Tanzania.

“The police are glad to inform the public that Christopher Aine, who was wanted in connection to a case of assault occasioning grievous harm in Ntungamo district and also to answer court summons issued by the chief magistrates court, Jinja, surfaced last evening, alive and in good health condition,” police spokesperson, Fred Enanga, said in April 2016.

Enanga said they were greatly relieved that Aine had voluntarily handed over himself to security and indeed, through his public interview putting shame to those who had along used cheap propaganda to generate publicity over his disappearance, claiming he was in police custody and while others insinuated that police had killed him.

Inaccurate reporting. Julius Aine was Lt. Col by the time he died

That is comical Wazza!

But, except another mischief stunt what is Aine up to?
Report to administrator
0 #4 Ugthinker 2019-11-27 19:35
Ugandans must be sick and tired of these same people who keep surfacing around election time just to confuse the public!

We need to analyse the consistency of all people claiming to fight Museveni, not all of them are genuinely doing so! Let’s stick to those leaders who have demonstrated clarity of purpose both in deed and speech!

Don’t let people use your plight in their games, wise up.
Report to administrator
+1 #5 rubangakene 2019-11-27 19:41
How many 'Aines' are out there? Is this a sign of things to come? You see, discontent has been "building and brewing" for quite sometime now; the sooner this government addresses the issue of poverty and disenfranchise, the better.

It is no good just handing in a few shillings, say to NRM youths or the likes of us here and there. We must go back to basics and revisit our 1986 manifesto. A meaningful "overhaul" of the status quo would really make a real difference!
Report to administrator
+1 #6 Lakwena 2019-11-28 07:55
Quoting rubangakene:

How many 'Aines' are out there? Is this a sign of things to come? You see, discontent has been "building and brewing" for quite sometime now; the sooner this government addresses the issue of poverty and disenfranchise, the better.

It is no good just handing in a few shillings, say to NRM youths or the likes of us here and there. We must go back to basics and revisit our 1986 manifesto. A meaningful "overhaul" of the status quo would really make a real difference!