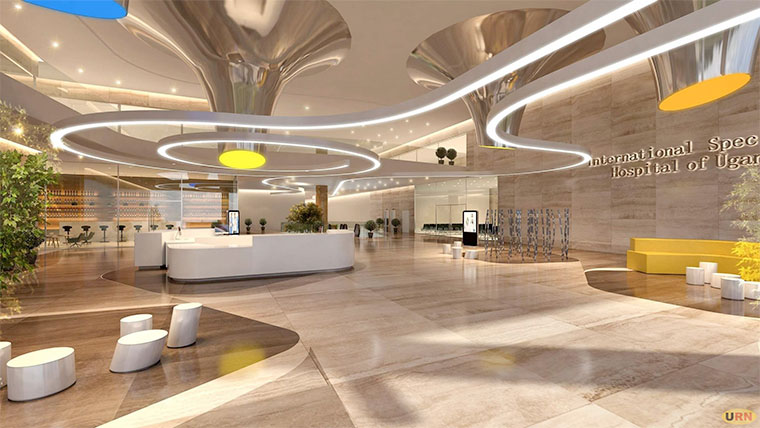 Artistic impression of the hospital

The government has said it is not worried about the ongoing squabbles between Finasi and ROKO as long as the construction of the International Specialized Hospital of Uganda continues.

Parliament early this year, approved a loan guarantee of Shs 1.4 trillion to Finasi/ROKO, a special purpose vehicle (SPV) for the construction of the hospital located in Lubowa, Wakiso district.

However, the project has faced setbacks with the SPV Finasi/ROKO falling apart following the introduction of another player, a Chinese firm, Power China Guizhou Engineering co.Ltd as the civil works contractor, but also allegations that up to $86 million meant for the project is already missing.

ROKO has since run to court seeking to alter the move by Finasi International FZC chaired by Enrica Pinneti to eject it from the shareholding in the construction of the hospital. Power China is already at the sight constructing despite the squabbles.

Appearing before the parliamentary National Economy Committee, the deputy attorney general Mwesigwa Rukutana told MPs that as far as government is concerned, that is a fight that will be resolved, and so far it has not affected the project works. He also says the court battles will not affect the implementation of the works, as the ministries of Finance and Health are keeping a keen eye on the project.

According to Rukutana, because Finasi has 95 per cent shares in the special purpose vehicle (SPV), and Roko has only 5 per cent, it is acceptable in law for Finasi to contract another company. He says the SPV is an independent company different from the ROKO and Finasi international FZC and what government wants is for the construction to continue.

"Implementation of the project agreement is going on so well. Actually, as I told the committee, the information I have is, implementation is ahead of schedule. Even if we know that there are disagreements, those agreements have not affected the execution of works as per the agreement. So it is not yet of concern to us..." said Rukutana.

However, Edmond Ariko, the Soroti Municipality MP says the reason parliament approved the loan guarantee to the SPV was because of ROKO construction company, as Finasi International was an unknown company and did not have the capacity to construct the facility. He says Finasi was supposed to come in at a later stage to equip the facility and train specialists but not take over the construction of the facility.

"We’ve never known Finasi to have done any construction anywhere. The strongest argument that we were given then by the minister of Finance, Hon [David] Bahati, was that Roko is known to everyone in terms of construction. Finasi was going to concentrate on the aspects of equipment and training. In the circumstances where our assurance of quality works in construction are no longer as agreed as parliament because the Chinese government was not part of SPV, wouldn’t it have been, Hon attorney general, something that would have triggered you how do we get the assurance of works?" said Ariko.

Committee chairperson, Syda Bbumba questioned why the contractors are in conflict, but government claims that the project was going on smoothly and ahead of schedule. She also told Rukutana that they are concerned about a possible conflict of interest which might affect project works. She called on the government to sort out the issue of the owners' engineer, Francis Wakabi whose contract has expired but was still in office. She said the issues were serious and ought to be handled expeditiously.

Last month, Dr Jane Ruth Aceng, the minister of Health ran to the president seeking intervention in the Lubowa hospital saga, saying it had gone beyond them.

We know they are as corrupt as "maggots". Roko has been with us for some time even at hard times, they have trained locals and proved their worth.

It is Roko that used their sophisticated equipment to pinpoint the location of the Amin's soldiers to Tanzania bombardment with SABA SABA, lest we forget!
Report to administrator