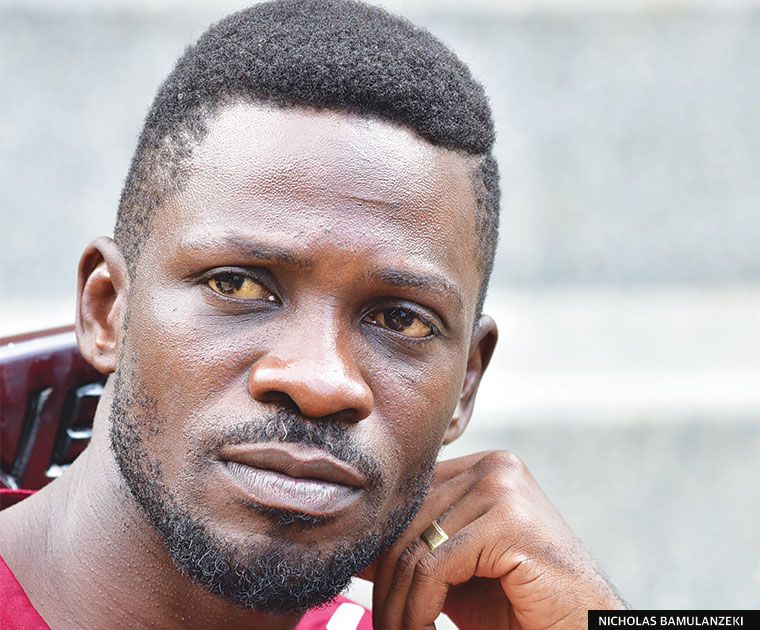 A letter signed by assistant inspector general of police, Asuman Mugenyi, the police director of operation on behalf of the IGP, notes that Kyagulanyi’s previous music concerts held at his One Love beach in Busabala have fallen short of security guidelines.

Ochola claims that Kyagulanyi's shows have severally turned into a public nuisance, violated traffic rules and regulations and caused other misconducts, which don’t only bleach law, but endanger the lives of other people who are not even part of his music events.

“On that background, therefore Uganda Police will not be able to secure your planned concerts and will not risk them to be carried out in any insecure environment,” reads the letter in part.

The singer has since posted the police letter cancelling his concerts on his Facebook page, saying he will not sit back and watch his rights being violated. He accuses police of playing ping-pong for more than a month ever since he wrote informing the institution about his intended concerts.

“Three days ago, they wrote back to us giving us a litany of requirements. We invested huge sums of money to meet their demands, some of which were unreasonable. This was in addition to what we have invested in advertising and preparing the show,” Kyagulanyi said.

The self-proclaimed ghetto president said police intercepted trucks carrying machines and stage materials to his beach on Saturday night. He says police have so far blocked 124 music concerts organised by his team or where he has been announced as a performer.

“Today, this is the letter they gave to us no show. Please remember, all other artistes are not required to fulfill any of these requirements and their shows have not been stopped. This brings the total number of our blocked concerts across the country to 124 since October, 2017. We shall not sit and watch as our rights continue to be violated. We shall fight impunity,” Kyagulanyi said.

He however, didn’t disclose what intends to do. Bobi Wine is currently battling police in courts of law for blocking the launch of his Kyarenga song.

Bobi wine, the struggle to remove a dictator will be tricky and complicated but bearable.
Report to administrator
+1 #2 goodman 2019-04-22 03:18
M7 is next to Bashir, he has now turned the central Bank of Uganda to State House.

Instead of distributing the country's resources equally, he's now giving it to those he chose to have it. We have seen more strong African leaders come and go. His days in power are numbered.

People Power; we continue our mission to rescue our motherland Uganda. Let us all have one common cause and drive the dictator out of power.
Report to administrator
+2 #3 sula 2019-04-22 08:40
1- 1986 - TO DATE Uganda has been /still under occupation. The state was captured and Ugandans are just subjects of the occupying force. We have no rights, the only do us a favour with the little they throw in our faces.

2- The occupying force is unapologetic,shameless,cruel and extremely arrogant.

3- Bobi Wine and the upcoming young politicians ought to understand fast that 'defiance' is not an option or luxury but one of the God given alternatives left for the people under occupation.
Report to administrator
+3 #4 sula 2019-04-22 08:47
1- Courageous words from Bobi, Now we are waiting for the support from the Senior politicians to amplify his stand.
Report to administrator
+2 #5 busingye 2019-04-22 11:18
In my view the way things are going only place Bobi Wine can be assured to have a concert is State house Entebbe or Nakasero.

Thats where there is enough security provision more than Uganda police can afford.
Report to administrator
0 #6 Twebz 2019-04-22 11:28
This is adequate provocation to ignite a Sudan-like sit-in to push an oppressive regime out of power.

Do yourselves a favour by starting a people power movement to drive tyranny away.
Report to administrator
+2 #7 kabayekka 2019-04-22 12:48
So what is the sense of this young man encouraging Uganda citizens with all their rights to obtain ndaga muntu.

Is ndaga muntu a better right than the right to make a living in this independent African country of ours?

Let one put it this way. Is owning ndaga muntu a priority human right that allows one to vote than a right for the citizen of this country to go everyday to work and earn a living?

Under what powers should the Uganda Police use to stop a citizen to earn a living and to pay tax?
Report to administrator
-1 #8 kabayekka 2019-04-22 14:26
Why on Easter does Bobi Wine make only one place for his concert?

He should be able to make 2 or 3 places for his music assistants to assist him.

Then this big spender of a government can pull out all the Uganda Army and Police to sort him out.
Report to administrator
+1 #9 OPALA CHARLES 2019-04-22 14:34
AM watching
Report to administrator
+1 #10 Apollo 2019-04-22 16:33
Something happened to Bashir recently and his friend does not want to take chances but wapi; Bashir invested in all those shenanigans but still failed.

Honestly its only a concert! Just wondering why the Observer says "Ochola claims that Kyagulanyi's shows have severally turned into a public nuisance" yet the letter was signed by Asuman. Are we sure he is even involved?
Report to administrator