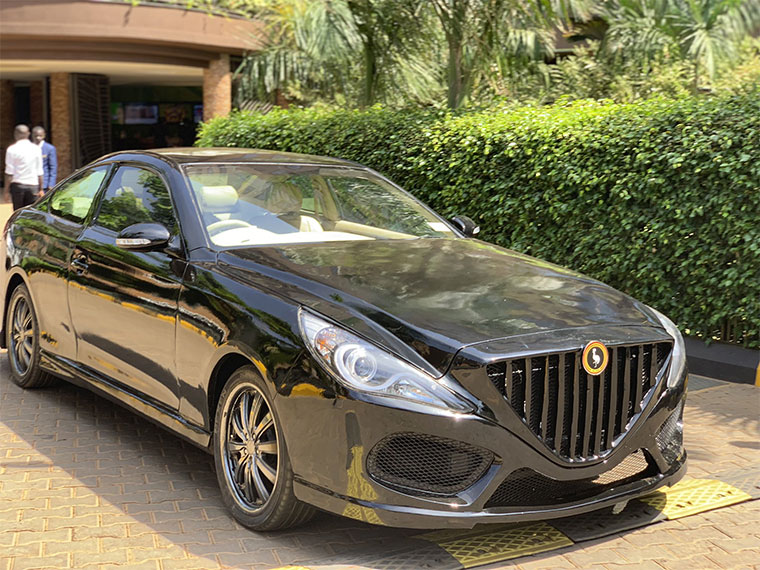 When unveiled officially on the market, the “beast,” Kiira EVS locally manufactured electric car will cost about $35,000 or Shs 130m, an official at Kiira Motors Corporation, the manufacturer, has said.

Sandy Stevens Tickodri-Togboa, the executive chairperson of Kiira Motors Corporation, said when properly engineered, a brand new beast car will cost $25,000 to $35,000 before taxes and its manufacture will be on placed orders for the start.

“The difference between our other brands like the Kayoola bus, Kiira EVS the “beast” runs both on rechargeable batteries and a normal combustion system,” he said at the weekend during a test drive around Kampala.

Togboa added, “When one is driving around Kampala, you can use the battery but when you are going to far places like Arua where I come from, you can use the petrol engine; however, the car [Kiira EVS the “beast”] will be manufactured on order basis.”

The Kiira EVS is on display at the on-going third Parliament week exhibition in the parliamentary parking yard. It will end on January 19. Allan Muhumuza, the business development manager at Kiira Motors Corporation, said Kiira Motors is participating in the exhibition to showcase the company’s potential as a local carmaker. He said they are ready to take production orders to supply vehicles for the local market.

“We have come a long way and now we are ready to take orders to produce vehicles for the Ugandan market. We at Kiira Motors have the competencies and capacity to take our vehicle innovations to the next level and we are ready,” he stressed.

He added that by showcasing the rebuilt Kiira EVS, the company will demonstrate to Ugandans the vast opportunities they can either invest in or participate in local content generation.

“When the automotive industry takes off with Kiira Motors in the lead, Ugandans should be in position to benefit directly by manufacturing and supplying vehicle parts for the Kiira car production plant in Jinja,” Muhumuza stated.

Togboa explained that KMC was allocated Shs 24bn this financial year to, among others, extend utilities at their under-construction plant in Jinja Industrial Park.

“By the end of this year, there should be some good progress in the construction of the motor plant in Jinja; the government looks committed since it has started reimbursing funds; in the next four years, we expect to get Shs 143bn in phases,” he said.

Togboa also hinted that when the plant is fully constructed, KMC plans to enter into agreement with other global car manufacturers to use the plant.

“The facility will be available for other car manufacturing companies like Tata (Indian company); the plant is big enough to accommodate other interest players,” he said.

Please Prof. Tikodri, l strongly suggest you plan for extensive crash tests to ensure that the car is safe for the users!! It's price tag is also rather high for an average Ugandan!!

You must have read about how the Volkswagen Beetle was conceived in Germany- ie intended to be affordable, economical, durable etc during the hard economic times of the day..

As a result, the Beetle rolled it's wheels around the world for over sixty years!!! And the success story does not need to be over emphasized
Report to administrator
+10 #2 Lakwena 2019-01-16 12:18
I am a doubting Thomas. E.g., an automatic transmission (gearbox) is a precision and very complex system; unless the Kiira EVS, is a contraption, wherefrom did Tickodri-Togboa get the engine and transmission?

Where were the engine block and cylinder head for the petrol engine molded and calibrated?

And instead put our hard earned tax money into where we have a comparative advantage: in e.g. memvu, cassava and potato growing, by investing in agricultural equipment like tractors and planters.

In other words, this is "a white elephant" to suck our blood for nothing. How many will by the Kiira whatever, in order to make economic sense of it?
Report to administrator
0 #3 gwok 2019-01-16 13:23
It looks good. That is the way to go, even if the design points to a plagiarized Volvo. We cares about that, anyway?

The fact that IT IS MADE IN UGANDA is the most important thing and should be our pride. I wish they could, in the near future, do the same with a Citroen DS but / & make it smaller (2 persons) and fully electric.
Report to administrator
+3 #4 Jama 2019-01-16 18:25
Here is a golden chance to launch a national public transport company, using our own made buses the kayola.

The gorvnment is supposed to launch this company by commanding for these veichles.

Why not see one day,Kira made cars used officially by ministers, MPs and other gorvnment officials.

Big up for those who started this project.They should know its no longer thiers but a national project. This project is the pride of an entire nation.
Report to administrator
+5 #5 Miki 2019-01-16 22:32
Does anybody really buy this story that Uganda is on the cusp o establishing an auto industry?

Do these guys really know what it means to set up run and sustain an auto industry? In the long run it may be possible.

But the first step should be to make machines that make machines and the various products like the numerous parts that an auto industry gobbles up.

There is also the issue of economies of scale that a Ugandan market is not able to provide. \

Why doesn't Uganda start by making agricultural tractors, irrigation systems equipment and them move on to other devices that eliminate back-breaking labour in the production system while increasing productivity at the same time?

These are easier to make than the cars this deluded professor is talking about. Unless of coursethe mission it to con some money from Mr. Museveni. Anyway he is a mufere himself.
Report to administrator
0 #6 mitchell 2019-01-17 05:53
Quoting Amooti Mugi:

Congratulations...!!
Congs to all involved in the evolution of the kiira car...!!

Please Prof. Tikodri, l strongly suggest you plan for extensive crash tests to ensure that the car is safe for the users!! It's price tag is also rather high for an average Ugandan!!

You must have read about how the Volkswagen Beetle was conceived in Germany- ie intended to be affordable, economical, durable etc during the hard economic times of the day..

As a result, the Beetle rolled it's wheels around the world for over sixty years!!! And the success story does not need to be over emphasized

Too costly. Perhaps the innovators could replace the petrol with liquid petroleum gas. The company could lobby for the vehicles to be tax free.
Report to administrator
+2 #7 Sabiti 2019-01-18 09:41
Foremost, felicitations and worth celebrating!I urge the government to replace all their luxury vehicles with the ones from Kira motors.

I agree with comments by colleagues here that the engineers would have done well with the most needed items in Uganda such as agricultural and some medical equipment.

The cost of the vehicle is quite prohibitive indeed and can only take industry down; even those who can afford will rather put that kind of money on the time tasted brands. I hope we are wrong to think along these lines.
Report to administrator