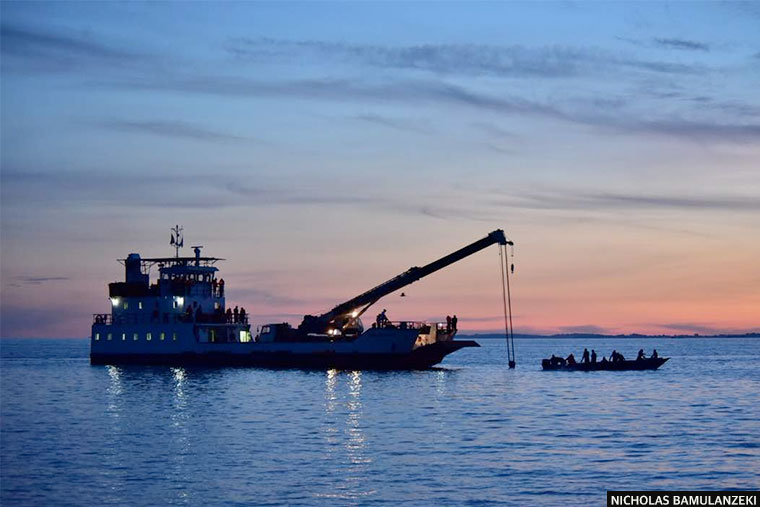 The mission to retrieve the sunken MV K Palm boat has been aborted after MV Kalangala also failed to complete the job. A team of divers from the police and the army have been working with local fishermen to try to pull out of water the wreckage without much success. Yesterday a group of energetic youth were in futility deployed to pull out the wreckage using ropes. Today, the roped tied on a police excavator twice snapped under weight which prompted for government to order for MV Kalangala.
At least 33 bodies have been recovered and more than 25 people rescued. More than 50 others are still missing four days after the Saturday evening accident. Government ordered Nation Oil Distributors, the operators of MV Kalangala ferry to halt operations so as to help retrieve the sunken ship. But midway through the operation, officials realised that the vehicle crane mounted on MV Kalangala was too weak to complete the job.
Benon Kajuna, the acting permanent secretary, ministry of Works had written to Sadala Musoke, the managing director Nation Oil Distributors to halt the operations of MV Kalangala to help retrieve MV K Palm.

In his letter, Musoke said it has been found necessary to utilize the services of MV Kalangala to assist salvage the capsized vessel and recover the remaining bodies that could be trapped underneath.
"The purpose of writing is to request you to re deploy MV Kalangala for the assignment. You will provide the necessary fuel required for the activity and you will be reimbursed at the rate in the operating contract," reads Kajuna's letter in part.

According to Kajuna, MV Kalangala will return after retrieving the capsized vessel. People moving to and from Kalangala using Port Alice Entebbe - Kalangala route are now advised to use SENCATA boat to reach their destination.

MV Kalangala is the major operator along the Kalangala-Entebbe route. The deployment of MV Kalangala to Mpata follows the failure by several marine vessels belonging to security agencies to retrieve the vessel and recover the remaining bodies from the lake.
Meanwhile, one more body was retrieved today, bringing to 33 the number of bodies retrieved from the lake since MV K Palm boat sank in L.Victoria on Saturday. The body was retrieved by a team of divers from police marines and UPDF on Tuesday afternoon.

Asuman Mugenyi, the police director of operations said the divers sighted the body while trying to retrieve the wreckage of the boat from the lake.

0 #1 Onzi Jima 2018-11-27 23:20
The death cruise seems to morph into mission impossible in recovering the sunken fishing boat.
Report to administrator
0 #2 rubangakene 2018-11-27 23:27
A crazy knee-jerk idea; salvaging a boat entails a lot of planning to be effective otherwise life and salvaging ship could be lost.

You have to survey the sunken boat, have the particulars of sunken boat in hand; weight, construction, etc., and then probably dive, drain, seal said boat to enhance buoyancy.

You also have to match the salvaging ship capability to do the job otherwise it could go down.

You need to fly in experts to do the job; it is cheaper in the long run. There are quite a few 'volunteers' around the world 24/7 if called to help. Do not be ashamed to ask for help.
Report to administrator
+1 #3 Wooden K. 2018-11-27 23:58
Here is what might work:
tell the security people that People Power "terrorsit" are hiding under that boat and planning to hold a thanksgiving meeting there under . I can bet that this thing will be on the surface withing 21 minutes.

In other words, "strategy" (what if) means nothing! Everyday's life is "To Whom it May Concern" (Shauriyako).

Including giving birth, living, falling sick, dying, education, etc.; everything is at your own risk.

Unfortunately, with their "gavumenti atuyambe" many Ugandans still don't get.

In other words, because everything is failing under the watch of Mr. M7/NRM, Uganda is failed state.
Report to administrator