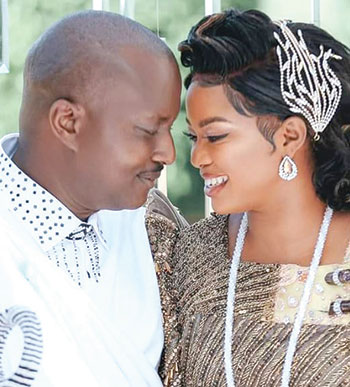 At pastor Aloysius Bugingo’s controversial kwanjula ceremony recently, the contested traditional wedding had an unforgettable feature that later became a talking point: the prominence of the Kinyarwanda culture in speech, dress and wedding customs.

The groom’s entourage (many did not know Bugingo was a Munyarwanda until that day) was dressed in Kinyarwanda garb and the spokesmen at the function fluidly switched between Luganda and Kinyarwanda.

Banyarwanda, referring to people with distant roots in neighbouring Rwanda, are recognized as citizens of Uganda by the 1995 Constitution and listed as tribe number 24.

Regardless the decades they have lived here, the Banyarwanda have never been fully embraced and many Ugandans don’t understand the difference between them and the nationals of Rwanda.

Joachim Buwembo in his article titled, ‘Banyarwanda Could Be Uganda’s Biggest Tribe’, cites a study done upon Uganda’s Independence in 1962, which found that a fifth (20 per cent) of people in Buddu county of Buganda Kingdom were ethnic Banyarwanda.

Still, even in Buganda, being a Munyarwanda attracts unbelievable stigma, which has led to many Banyarwanda adopting Kiganda and other Bantu names and cultures, just to live in peace. But something has happened lately, causing the Banyarwanda community to stand tall and proud, and embrace their tribe and heritage.

The Council of Banyarwanda, an independent, not-for-profit organization with a mission of protecting the rights of Banyarwanda born and raised in Uganda, has proposed that the Banyarwanda tribe in Uganda change their name to Abavandimwe.

It cites among other reasons, segregation by Ugandan authorities that do not differentiate between Banyarwanda and Rwandan nationals. Banyarwanda have been part of Uganda since 1900 when their ancestors first migrated.

According to businessman Frank Gashumba, who was part of Bugingo’s entourage and heads the Council of Bavandimwe, Banyarwanda in Uganda are in three categories; Banyarwanda of Kisoro, commonly known as Bafumbira – Kisoro was once part of Rwanda and was only separated by the British in 1884.

Then there was the group of economic migrants that left Rwanda in 1922 for Uganda to work, and lastly another group that came in 1959.

Gashumba says the latter are the Rwandans that fled political wars between the Hutu and Tutsi. Among them was current Rwanda president Paul Kagame, former NRA/ RPF strongman, Fred Rwigyema and others. That group and their descendants went back between 1990 and 1994 and were part of the liberation struggle.

Abavandimwe, born from Ubuvandimwe or ubuntu – a bond among brethren, started as a movement in May 2021 and, reportedly, majority of Banyarwanda born in Uganda are happy to be called Abavandimwe.

Gashumba says there are more than 11 million Banyarwanda living in Uganda and 7 million have so far subscribed and proudly call themselves Bavandimwe.

“The fraction that is disturbing us is of the senior citizens, who are old. But with time they will appreciate it,” Gashumba says.

“We have 107 members of Parliament as we speak and they are very ready to embrace it. Those who have been hiding have started revealing themselves, for example, Hon Joseph Ssewungu, Hon Sylvia Ayebare from Gomba, Hon Diana Mutasingwa are all Banyarwanda, and the number is big. There are those who don’t want to reveal, but we know them,” Gashumba says.

“We started in 2017 out of pain, hate and frustrations, which our people go through every day. The council for Abavandimwe has 21 people on official leadership, but we have regional leaders in Buganda, which we have concentrated on first.”

Gashumba says he got temporary leadership, “but if there is someone ready to take over, I am willing to hand over the burden, because it is heavy”.

Speaking to The Observer, Gashumba says despite being recognized as Ugandans, members of his tribe are being denied access to national identity cards and passports, which are some of the most important documents every Ugandan should and must have.

“Our tribe is being systemically locked out of the economy and public service of this country. Some of us cannot get phone sim cards, open bank accounts, acquire loans or even exercise our patriotic duty to join the police or armed forces. Our research shows that 80 per cent of our young people who have at one point applied for passports to be able to travel and seek jobs abroad, go for treatment or for business, have been denied access, despite being citizens of Uganda,” Gashumba says.

And lately, with the tensions between Uganda and Rwanda, the Banyarwanda in Uganda are taking an undeserved beating, simply because of their DNA. Governments on both sides of Gatuna/Katuna border treat Ugandan Banyarwanda with suspicion, as each thinks their (Banyarwanda) loyalty lies with the other.

Like a heavy york, the title Banyarwanda is one Gashumba and his tribesmen and women seek to discard and embrace being Bavandimwe.

“Much as we are in the constitution of Uganda as Banyarwanda, 93 per cent of Ugandans – according to the study we have done – don’t believe we are Ugandans.

They believe we are imposing ourselves on Uganda; that we are refugees. In Uganda we are discriminated against, mainly in government offices,” Gashumba, who is proud of his Ugandan ancestry in Villa Maria, Masaka, further says.

The Bavandimwe council has many complaints of Banyarwanda born and raised in Uganda – such as Godfrey Rutagengwa of Kasiso village, Kitale parish, Namuganga sub-county, Nakifuma county in Mukono district, who has a national ID and even voted in the general elections – who have been denied passports.

There has been a systemic erasure of Banyaranda as a Ugandan tribe, and in order to avoid all the bottlenecks, many have for decades simply identified as other Ugandan tribes on official documents, because filling in ‘Munyarwanda’ triggers more questions and eventual rejection.

Gashumba says the group of Rwandans that migrated to Uganda as early as 1900 have since become an indigenous tribe of Uganda and their descendants know no other home and roots, apart from the ones put down by their forefathers in Uganda.

While the framers of the 1995 Constitution debated and agreed that Banyarwanda are indeed Ugandans, they did not foresee how difficult it would be for other Ugandans to understand the difference between Banyarwanda and nationals of Rwanda; otherwise, they would have introduced a new name then.

It does not help matters that in many Ugandan languages, natives of different countries are identified by the name of their county. In Luganda for example, Ugandans are ‘bannaUganda’, Kenyans are ‘bannaKenya’, Sudanese are ‘baSudani’ and Rwandans are ‘Banyarwanda’.

One, therefore, “cannot blame Ugandans for thinking all Banyarwanda are nationals of Rwanda, and this perception has been used by politicians and lately, security agencies, to demonize members of our community”.

“In order to help Ugandans and the government of Uganda to make a clear and definitive distinction between nationals of Rwanda and our tribe, we believe it is time we rebranded to Abavandimwe,” Gashumba says.

Jerome Katabazi, a Muvandimwe says that to recognize only Bafumbira as the only legitimate citizens of Uganda of all Kinyarwanda-speaking communities is to practice double standards.

Like Gashumba, he feels the need to lose the title Banyarwanda that references a country called Rwanda and partly contributes to the stigma that runs so deep to the extent that Ugandan Banyarwanda resort to embedding among other tribes just to safeguard their citizenship rights.

“This is the case especially among Banyarwanda from Western Uganda, who easily camouflage among Banyankore, Bakiga and Bahororo, because they look like them and fluently speak the languages from those communities and at times take on their names,” Katabazi says.

“This, however, is not the case with Banyarwanda from Buganda. Despite speaking Luganda effortlessly, they cannot hide among Baganda because of their appearance. A name rebrand from Banyarwanda to Abavandimwe might be the solution to Banyarwanda who feel disenfranchised due to the name reference to Rwanda.”

Muhimbise George, a social-political commentator says the Banyarwanda have been burning silently and because of a perception that they benefit from the regime, their tears have flowed unnoticed and their pain unheard; rebranding is a step to fight for their human rights now and for generations to come.

“The political persecution against the Banyarwanda/Bafumbira cost me my identity and culture. I grew up unable to express myself with a little sense of self worth simply because of whom I was born! Millions of Bafumbira in Tooro, Ankole, Buganda and Bunyoro have abandoned their Rufumbira names, rejected their own culture and scattered because of fear of stigma; so, if we opt for Bavandimwe there might be change,” Muhimbise says.

If Gashumba and his people have their way, Bavandimwe will one day be recognized as nationals in the Constitution of Uganda. They have already petitioned the speaker of Parliament and leader of the opposition about the discrimination and segregation they are facing.

“Our relatives are being denied national identity cards every day; the few who get it is due to our activism and we want government to support the end of this stigma,” Gashumba says.

One would think, with all the glowing stories coming out of Rwanda lately, the Banyarwanda community in Uganda would be compelled to identify as Rwandans, but no; they are proudly Ugandan and want to be treated with fairness like other Ugandans as enshrined in the constitution.

Why do Banyarwanda hide their 'tribe'? I think if they came to Uganda as far back as 1900, they should have been assimilated into local tribes already and we wouldn't be discussing this!

They were 'recognised' as a tribe in the 1995 constitution, 26 years today, and they are still struggling with recognition issues!

Doesn't that speak volumes? 107 MPs are Banyarwanda and they are 11 million in Uganda, the biggest 'tribe' by numbers as Gashumba claims, can't they use that 'strength' to their advantage?
Report to administrator