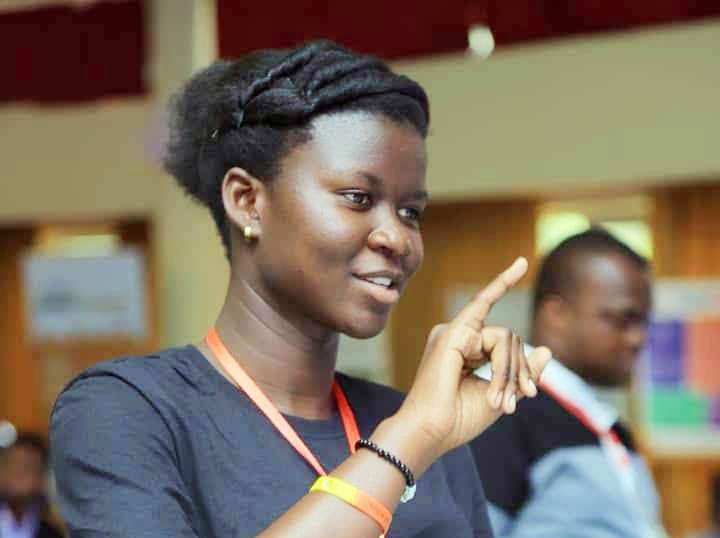 Gloria Luyinda during a presentation

Gloria Hindu Luyinda may be deaf but the 22-year-old is spearheading the inclusion of people with disabilities (PWDs) in sexual reproductive health programmes in the country, writes Ernest Jjingo.

At a March 21 peer education workshop on sexual reproductive health and rights (SRHR) at Nsambya Sharing hall, several speakers emphasized the need to involve youth in the sensitization of the population.

During the deliberations, one young lady stood out amongst the panelists for advocating for the rights of the disabled in the programme. Gloria Luyinda made her presentation using PowerPoint but the impact it had on the audience was immense.

She demonstrated how she has used the disability of growing up deaf as well as the stigma associated with it to advocate for PWDs in sexual reproductive health.

“Discrimination of PWDs starts with the absence of friendly physical structures and the negative perception from able-bodied people. Entrances to most buildings have no ramps and rails for PWDs. In most places, PWDs find washrooms are narrow while handles are very high. So, if physical structures are unfriendly, this makes it hard for a PWD to access an SRHR facility,” she reasoned.

“I have personally experienced the negative attitude of some service providers like nurses, doctors, counselors, and so on. They mistreat PWDs or may decline to give them service because they think PWDs do not engage in sexual relationships. Sometimes they may demand a PWD to produce consent of the parent or caretaker as though they cannot make independent decisions. A negative attitude can also be in the kind of language they use to refer to a PWDs which may be degrading. For example, they call us kasiru (deaf and dumb), crippled, handicapped, lame. Some health workers or Service providers think that PWDs have no sexual feelings and so there is no need for them to have access to SRH.”

At the end of her submission, she got a standing ovation and left many wondering what inspires her to champion the rights of PWDs, who are often left out of such initiatives. The 2016 Uganda Bureau of Statistics Census Report indicated that 12.4 per cent of the Ugandan population lives with some form of disability, implying that approximately 4.5 million Ugandans are persons with disability hence a concern for sexual reproductive health and rights.

This damning statistic is one of the inspirations of Luyinda’s advocacy for SRHR for PWDs. Indeed, Luyinda is a peer educator at Reach A Hand Uganda and also works with WEtalk Series Uganda as a head of Disability Inclusion.

“I am so passionate about what I am doing because as an advocate for social and disability inclusion, I speak on behalf of my fellow PWDs and create awareness about their abilities and rights,” she says. “I get inspiration from my childhood. All was well until the age of three when I fell sick and lost my hearing. My mother never neglected me; she was always around to support me grow.”

Luyinda says she had no clue about the SRHR until she joined Reach A Hand’s Peer Educators Academy in 2019, which helped her build confidence and self-esteem. “Not only did I start to believe in myself, I also learned how to associate and work with people without disability,” she says.

Since then, Luyinda has used the platform to champion disability inclusion. As a peer educator, she has worked on a number of initiatives, including the Make 12.4% Work Initiative run by Reach A Hand Uganda, Light for the World and NUDIPU.

“I have moved to several parts of the country and addressed people from diverse communities but my major emphasis is on the young PWDs to become peer educators so that they can also gain knowledge about sexual reproductive health and rights and help educate those who are less fortunate,” she says.

However, this has not been a smooth ride for Luyinda and she highlights more of the challenges PWDs face when it comes to accessing SRH or livelihood support.

“Meanwhile, PWDs in rural areas who use wheelchairs or those with physical disabilities and in some cases the blind, incur challenges accessing the health facilities because of the long distances from their homes. This also can increase chances of sexual abuse such as rape and defilement on the way to the hospital or more disabling accidents due to bad roads.”

Luyinda further wants billboards and notices about SRHR to include disability-accessible formats for people with visual impairment who may not be able to see.

To mitigate the situation, Luyinda suggests there should be an integration of sign language in SRHR programming by government and civil society organizations.

“For example, there should be sign language interpreters for every SRH engagement, information dissemination, and service provision,” she says.

“Capacity building for health workers and service providers is also need in order to help them understand how to work with PWDs, their rights as well to realize a change in attitude towards the SRHR needs of PWDs. Government should also support sign language and braille workshops and training for health workers, service providers so that they get to learn sign language and braille in order to make communication easy.

“I used to be bullied because of my hearing problem. I felt out of place and I would cry to mum telling her I needed to be taken to another school but all she would keep telling me was to be patient,” she says.

“Later on, when I was in primary four, my young sister joined the school and she was my hero because she would challenge all those who bullied me.”

When her hearing impairment worsened in secondary school at Kawempe Muslim SS, Luyinda was transferred to Wakiso School for the Deaf, where she completed A-level in 2016.

She later joined Makerere Institute for Social Development, where she graduated with a diploma in Social Work and Social Administration in 2019 and she is currently pursuing a bachelor’s in Adult and Community Education at Kyambogo University.

“I have always had a handicap in school due to lack of a sign language interpreter,” she says. “I want to use my experience and exposure to ensure other young PWDs don’t have to be handicapped, especially when it comes to sexual reproductive health and rights, because they are the most vulnerable.”