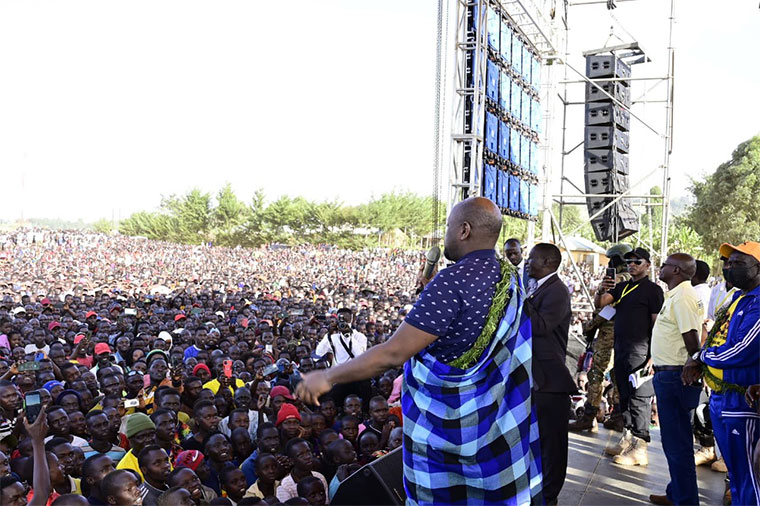 Muhoozi at a rally in Mbale

In the video, he farts, looks around seemingly unaware that the rapt audience in front of him is not a figment of his aging imagination. It is a terrible thing to behold another’s failings so openly.

Biya, who spends most of his time abroad in far nicer and European countries, rules with an iron fist and has been in power since 1982. From 1975 to 1982, he was the prime minister until his predecessor resigned from the presidency, citing ill health.

But Biya, Africa’s second longest- serving president, is not about to let pesky ill health or old age get in the way of his uninterrupted presidency. Despite a violent secessionist conflict in parts of Cameroon, Biya is seemingly on course for another run in 2025.

Did you see this? #Cameroun @PR_Paul_BIYA dictatorship. Old man with memory loss at the head of a state. #USAfricaSummit2023 pic.twitter.com/O7QN62RDWv

Regaled by his supporters in extravagant superlatives that would make Donald Trump swoon, his more rabid supporters are clamoring for Biya’s 51-year-old son to succeed him. Cameroon, like Uganda, also has a constitution that governs political contestation of the presidency.

But by now, we know constitutions here are just feel-good documents to sanitize impunity. Before Biya, it was South Sudan’s 71-year-old president Salva Kiir trending in a most pitiful sight. In a video that made uncomfortable viewing, a smartly decked-out Kiir is caught unawares when his bodily functions escape without his consent.

The discomfort of the people around him pretending not to notice, shiftily looking everywhere but at the mortifying vulnerability of President Kiir, is palpable. Not even on your worst enemy would you wish such misfortune.

Reuters on January 7 reported the arrest. of six journalists over the leaked video. In this era of shareable technology, the arresting authority should focus on containing the president’s leaks. The arrest of the journalists demonstrates the inflexible nature of clinging to power.

The longer one clings to power, the more entombed they become in that power, shielded from the reality of their subjects. One has to wonder about the inner circles of Biya and Kiir, especially after those videos. Does their privilege allow them to see things for what they really are - rickety boats on choppy waters with no life jackets onboard?

Imagining a post-Museveni era for Uganda is an exercise in robust optimism. Our imagination shudders for President Yoweri Museveni over the madness holding the country together. Thus, we turn to the ‘movement’ promoting Museveni’s son as the third-best thing since the Ugandan holy grail of cooking sizzling onions and tomatoes in hot oil.

If you must know, the second-best thing is the sun-kissed year of 1986. The General Muhoozi Kainerugaba (MK) Movement has all the tantalization of a political entity, yet at its helm is the First Son, a serving army officer in unconcealed contravention of the Constitution.

The MK Movement is simply reaffirming the way the Ugandan state works - according to the whims of the presidency. Disturbingly, the movement’s vocal promoters who argue that MK is just what the doctor (or witch doctor) ordered for Uganda, are pleasurably in bed with impunity.

A successful Uganda does not render the majority of Ugandans quisling spectators in their own land. A successful Uganda will promote peace and national reconciliation because our history demands it. If trending with unabashed impunity, mobilizing politically without a single drop of state-sponsored harassment is how the MK movement organizes, then this movement might be the biggest threat to our opportunity for a peaceful transition.

The far-out country of New Zealand reminded us that being mortal is who we are; behaving as if we are vibranium- powered immortals is for the delightful fantastical world of movies.

On January 19, the 42-year-old prime minister of New Zealand, Jacinda Arden, in an unexpected move, announced her resignation from office, reported The Guardian. With no bodily functions visibly failing her or allowing party minions to coalesce around her toddler offspring, Arden’s reasons for stepping down are so mundane that in Uganda we might even say she resigned ‘bya just.’

In her words, “I’m leaving, because with such a privileged role comes responsibility – the responsibility to know when you are the right person to lead and also when you are not. I know what this job takes. And I know that I no longer have enough in the tank to do it justice. It’s that simple.”

That is it. It’s that simple. When will our politics in Uganda be that simple?

After all, we are Africans, and save for the very rare case of Nelson Mandela, and a few others you can count on your fingers, there must be something inherently wrong with us Africans, that is manifested, whenever an African gets into leadership, never mind how.
Report to administrator
+4 #2 Lakwena 2023-01-25 19:05
Thanks Tayaad Muzzukulu.

From your colorful narrative, and at this rate; who in his/her right mind is still proud of being a Ugandan or sic African? It hurts!

Otherwise, it is only in the Cartoon World like the Road Runner, and Tom and Jerry that however battered, nobody dies.

In other words, we have a cartoon president and his son, whom nobody should take seriously.
Report to administrator
+6 #3 Talemwa Alitubeera 2023-01-25 20:27
Dear Tayaad Muzukkulu, It is a mistake to compare New Zealand' s Jacinda Arden , to these African leaders. The values are different.

The New Zealand leaders respect the people they lead and they believe that among the governed a new ,even better ,leader can emerge through the democratic process. In the African countries u cited, that is not the case.

Instead ,here discourages the emergence of other leaders. using suppressive violence. Alternative leaders are called hyenas, cockroaches , criminals, etc.. dehumanised completely
Report to administrator
+2 #4 Remase 2023-01-26 14:33
tayaad Muzuukulu, this is what Akot has always said, "A successful Uganda does not render the majority of Ugandans quisling spectators in their own land."

And Lakwena further adds, "in other words," the vast majority of native Ugandans are quisling spectators in their own land! Yes, our expectations would be misplaced if Gen. Muhoozi M7 acted differently than M7.

As the most violent individual on planet [Sabalwanyi], M7 has killed innocent people all his life with impunity. M7 killed his way to power with impunity. By means of the gun and violence, M7 owns Uganda since 1986 and does whatever he needs with impunity!

Like father like son, so just like M7, Gen Muhoozi M7 also has the gun and is violent! He recently threatened to invade Kenya, after which M7 instantly promoted his son to the rank of Gen. to clearly amplify impunity! M7, his family/relatives and tribesmen have enjoyed impunity made out of the gun, violence, corruption and patronage.
Report to administrator
0 #5 Remase 2023-01-26 19:54
M7 has built his political career on impunity, which has imbued his son, Muhoozi, with "tantalization of a political entity, yet he is a serving "militant" officer, which is against the constitution.

Recently Muhoozi threatened to invade Kenya, without any cause, instead of being court marshaled, M7 promoted his son to a full general.

Today, January 26, M7 is celebrating the day he captured our state by means of the gun and violence on which he built the impunity because he owns Uganda outright. Some of those celebrating today are our esteemed Mengo officials, Katikiro CP Mayiga, who believes that M7 is the best president of all times, and Nabagereka Nagenda, who is fond of hardcore organized criminals who have robbed our country with impunity.

Nabagereka is so passionate about rubbing shoulders with Janet M7 and Jim Muhwezi. Mayiga and Nabagereka are singing the Afrigo song, "Katusanyuke, Katujaguze, Omutanda jali ateredde."
Report to administrator
0 #6 Remase 2023-01-26 20:17
Why wouldn't Mayiga celebrate the impunity M7 has built in Uganda? Mayiga is one of the beneficially of impunity! Mayiga has made political statement while he is a sitting cultural leader and at Bulange in a Lukiko, which is against the constitution.

Mayiga urged the nation to accept M7's rigged elections in order to continue enjoying the impunity M7 has built! He got away scot free! Mayiga later told us that "Awangale ai Sabalwanyi M7" by reassuring us that M7 is the best president of all times!

So, by now, we know that our constitution here is just feel-good document to sanitize impunity. Just pay a visit to Mayiga's residence or wait by the roadside while he is by, you will be led to believe that it's Gen. Muhoozi M7, because of the militants surrounding Mayiga! We are under a militant rule, hence the impunity1 Muhwezi clearly told us that, "That's why we went to the bush!" To loot Uganda with impunity!
Report to administrator
+6 #7 Lysol 2023-01-27 05:55
You can offer a nomad, a home, but you cannot take away the nomadic lifestyle. The boy should go and look after his family's zebus. He is no politician.
Report to administrator
0 #8 Akot 2023-01-27 15:31
Remase, thanks.

Ugandans haven't understood that as long as they are alright with tribal leaders in posts, M7 & family are going no where!

- Y. Lule was only allowed a few months because he
was considered tribalists,

- T.Okello was considered dangerous & Ugandans
prefered migrant M7, in UNITY & he has been on
for +36 years!

Migrant M7 ruling for life isn't a proble & tribally divided ruled powerless Ugandans are doing everything to ensure his lifetime rule & succession by his son!

Which outsider would dare blame M7 or comment on how he rules the people who want & are keeping him as their chief tribal leader & fake president protected by all means, on all coners?
Report to administrator
0 #9 Akot 2023-01-27 15:48
OLIVIA NALUBWAMA,

Africa, without leadership, will end up emptied of it's educated as they are leaving for chance in developed world that need them!

Which means, only those in posts ensuring useless rulers in Africa & the uneducated poor who speak only tribal languages, will remain in place!

Developed world is lucky; those educated in Africa don't cost them much as they only revalue their eduction/deplomas... as poor African families have already payd school fees!

When the winter is over, migration to developed world will accentuate, while African useless rulers get richer through donations, loans...that only serve them!