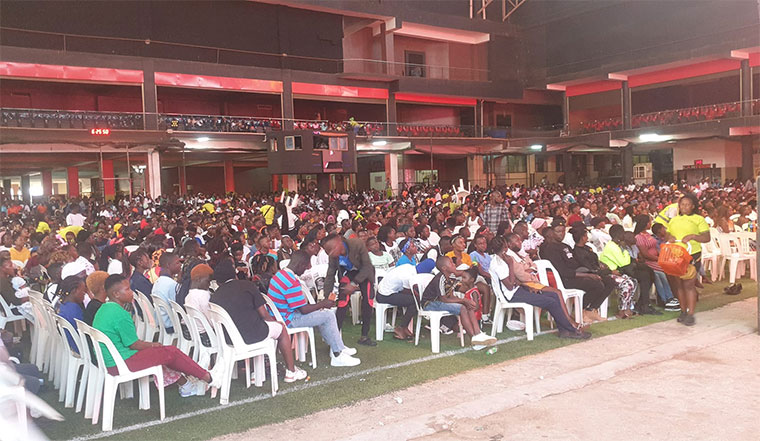 The revellers before the stampede at Freedom City

On January 1, we awoke to more numbers to add to our preventable deaths tally. The night of New Year’s Eve is an evening of rapturous crowds, fervent prayers, dedicated inebriation and unbridled excitement.

During the excitement of crossing into 2023, 10 people died in a stampede at Freedom City. The majority of the deceased were juveniles. Children. Yes, we are an abundantly young population with lots of young people to spare but surely we are taking this abundance too far.

When you google ‘Freedom City’, one of the top sites that comes up is Trip Advisor, a website that offers travellers from all over the world a platform to share their reviews about places. The website lists Freedom City as the 32nd of 49 places to visit in Kampala.

Dubbing the workmanship substandard, he concluded, “The owner should have done better. Much better.”

In 2018, a reviewer from New Zealand wrote, “The place just doesn’t look finished; in fact it looks like it is falling down. There is no flow from the badly designed car park to the shops...”

In April 2020, a visitor from the UK described her family’s visit to Freedom City as “an absolute waste of money” highlighting shoddy structures and terrible customer service. These reviews, even though just a drop in the ocean, indicate the structure invokes violent doubts about the lucidity of the builders of Freedom City.

In line with our steadfast commitment to mediocrity and passivity, the tragedy at Freedom City is no one’s fault. The owners and staff of the building blame the event promoter, the police casting aside their motto to serve and protect are yet to be responsible for any part of this tragedy.

Police told the Daily Monitor that their role at Freedom City was strictly about security outside the venue, implying whatever happened inside the venue is on the promoter. The blame-throwing is dizzying. A November 2015 article from the Iranian Journal of Public Health discussed public health lessons from a December 31, 2014 stampede in Shanghai, China.

The stampede left 35 people dead and 42 injured. The article noted mass gatherings pose a public health challenge, stressing the occurrence of stampedes as one of the top risks that could lead to death. It listed risk factors for stampedes as; high crowd density, inadequate security, rising celebratory fervor, and others. In short, when massive crowds gather, substantial risks also gather.

Kwonka, the risk factors are so simple and, therefore, utterly preventable. But such is the complexity of simple things when mediocrity is our default operating system. Media reports indicate police has arrested two people, the event organizer and the event MC, over the Freedom City tragedy.

They say if you are going to catch a frog, catch a big fat juicy one. Yet here we are with anorexic frogs. Last October during events to mark Halloween in South Korea, a stampede led to the death of 158 people. Last week, BBC revealed a police probe into the stampede determined police and public officials failed to employ adequate crowd control measures.

The probe referred 23 people for prosecution over the stampede. Half of the 23 are law enforcement officers. So far, a mayor, former district police chief and two police officers are in police custody over the October incident. Families of victims remain dissatisfied and are demanding the heads of the line minister and national police chief. The audacity of accountability.

Yes, your mediocre fatigue is already clamouring that Uganda is not South Korea and, besides, only 10 people died here, not hundreds. How right you are! You are as right as the fast-acting condolence money from the President - Shs 5 million for each of the victims’ families.

Five million placating our bambi kitalo nnyo sighs. No big heads on the chopping board. Our mediocrity serves those big heads well while also snuffing out the lives of expendable Ugandans.

Apart from a few you have mentioned above like the road accidents carnage to blind children dying in school fires, how about indiscriminate killing of innocent people like those M7 killed in Nov 2020?

To be honest, that 's expected of M7 because he is a self confessed hardcore most violent individual on the planet. Be it as it may and with clear knowledge of who M7 is, we don't ask ourselves, "Tuli ku ki?" M7 killed over 100 innocent people and many other are still missing to this date, with a clear message that he will continue to kill in order to cling to power, mediocrity is our default operating system!

After Kyagulanyi was released, he went back to the campaign trail, yet that was the cause of the killing of those innocent people! So, Freed City, road carnage and/or any other avoidable cause of death is mediocrity as our default operating system!.
Report to administrator
+2 #2 Lakwena 2023-01-21 12:29
Happy New Year Tayaad Muzzukulu

In other words Tayaad Muzukulu, who grew the mediocre (courtesy of Haji Nasser Ssebagala (RIP)?

The primary causes of the current social, economic and political malady of mediocrity, is in mediocre parentage: poor or non-upbringing children that has become a cultural norm.

And since we have a crop of mediocre politicians who had bad and/or no upbringing at all, and hence came to power through wrongdoing/high crimes; how do we expect excellence in public/social services?

NYET
Report to administrator
+3 #3 Kalibbala 2023-01-23 21:07
#Lakwena..Spot On...There was One Kalundi Sserumaga who dared to Challenge the Devil about having Experienced a Bad or No Upbringing at All!

He was Nearly Roasted! Uganda is the Only Country on The Universe Where Folks Enjoy Dying!!These Rwandese Came with One Mission "Kill Them Softly and Continuously " Anyhow!
Report to administrator