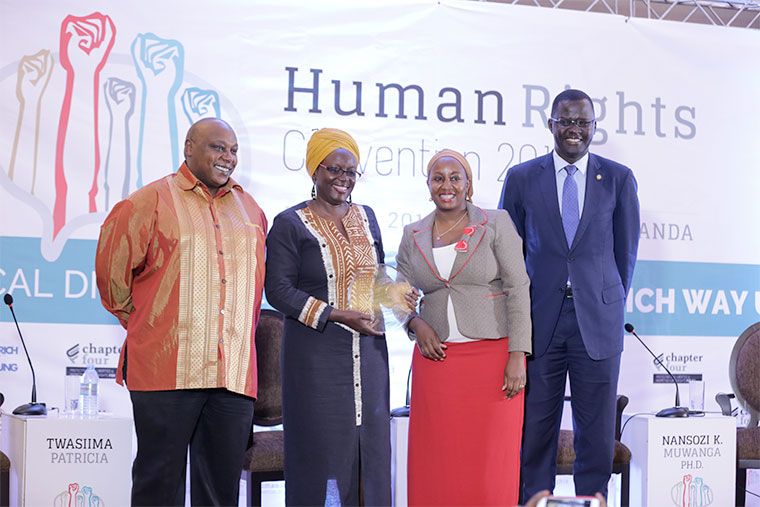 About a month ago, I landed on a still-picture of my friend, Prof Dr Zahara Nampewo, a professor at the School of Law of Makerere University in a meeting at parliament.

In what looked like a committee briefing, Prof Nampewo is in company of her team from the Human Rights and Peace Centre (HURIPEC), and the only other person visible on the other side of the table was my favourite legislator, Hon Francis Zaake.

Excited at seeing two wonderful friends of mine meeting, a different feeling quickly struck me. The picture quickly looked odd: I wondered to myself, “should they not switch sides—with Francis Zaake being the one briefing Prof Dr Nampewo?”

I then quickly recalled the painful conclusion I have written about here: in Museveni’s Uganda, “a professor of law seeks or is sought out for recommendations on any issue, while the onus to implement is placed on the shoulders of a young politician. [Let me say quickly: Hon Zaake is a wonderful friend of mine and an astute politician—the best rabblerouser at present as per assignment—and perhaps the only remaining authentic representation of the People Power spirit].

Well, before running off with my wandering thoughts, I made some phone-calls to fully understand what was happening in that picture:  Dr Nampewo and her team at the Human Rights and Peace Centre (HURIPEC) had been invited by the Human Rights Committee of Parliament to bring them up to speed on the human rights violations in the country.

HURIPEC is involved in several research projects and is repository of material and analyses on several items ranging from livelihood, land, violation to human rights and more. It is a prime centre for both basic and policy research.  Hon Francis Zaake is a member of this committee, which has other opposition legislators such as Flavia Kalule Nabagabe and Hanifa Nabukeera.

Despite learning the story behind the picture, I remained troubled by what struck me as one of the world’s wonders of Museveni’s Uganda.  [You have seen comments in praise of Kenyan politics being flooded with professorships and doctorates? Yes, Uganda is the exact opposite – and it is by design, not accident].

So, Prof Dr Nampewo – one of the very few credentialled professors of law we have in the country—is reduced to doing fieldwork and offering recommendations (which is undoubtedly a wonderful thing), and the burden to implement and legislate is slumped on the young shoulders of Bwana Francis Zaake.

I imagined more absurd scenarios: Prof  Joe Oloka-Onyango writing recommendations for our very regular AG Kiryowa Kiwanuka on a serious legal issue, or the economist, Dr Frederick Muhumuza briefing comrade brother Ramadhan Ggoobi—simply because they were appointed and thus charged with our lives.

It should be the other way round.  The point I am arguing is the day we forced our most educated people to switch sides with their least experienced and least educated compatriots in running the affairs of the country, was the day we lost ourselves.  We invest in education for a reason, and should pride in our most credentialled compatriots.

While the criticism is always made that “the elites have failed Uganda,” the truth is, there is a dearth of elites, academics, and intellectuals in our politics. There are accidental sprinklings of them but not enough to say the country is run on researched knowledge and science.

And this is not an argument about their numbers being small across the country, which is not in doubt. But that despite their small numbers—by a constitutional amendment—we locked our best brains out of politics.

They are locked in their public service and parastatal jobs. And the few that have been brave enough to engage in some form of political activity, are reduced to research and NGO work (which are themselves corruptions).

The constitutional requirement for people in public service interested in running for political office to resign their jobs three months to nomination day remains perhaps the most dangerous amendment ever passed.

This is because, since public service tends to employ our best graduates, demanding that they resign their sources of livelihood for an election they might lose is too much to ask. These being recent graduates on their way to political consciousness, the choice to resign their jobs for politics is simply limiting.

Unless they were thieves.  But three or five years into a job does not guarantee anyone enough savings to live without a job. To this end, our politics is flooded with former private businesspeople, former artistes, and lawyers from private firms (all of whom were struggling in this hopeless economy. But their struggles notwithstanding, they can return to their businesses if they lost the elections).

Others include retirees, and people who have been unemployed their entire lives, and are clearly unemployable, but somehow managed to loot their way into parliament.

I have argued before that it has never been their choice—although they might actually believe and claim so—for my friends, Nicholas Opiyo, Godber Tumushabe, Dr Sarah Bireete, Dr Frank Muhereza, Prima Kwagala, or James Nkuubi, and several others [just to mention the most famous] to be in the NGO world monitoring politicians. [I will not go into the structural issues that ended them in Kanjokya, Ntinda, Kololo, or Bukoto among other swanky neighbourhoods]. These people deserve to be at the forefront of our politics, not monitoring regular people gambling along.

But, away from these famous ones with swanky offices upscale Kampala—who are simply privileged victims themselves—the numerous politically-conscious Ugandans holding master’s and bachelor’s degrees with public service jobs that do not even allow them to express an opinion on the ways in which the country is mismanaged hurt the most. Why did we complicate the decision to join politics?

I hear someone challenging: why don’t these educated people craft their way back in? This is the work of activists. The activist ranks above the technocrat, and our challenge is to push for the removal of these 2005 amendments.

Museveni is afraid of only one person - Besigye - he knows he is more intelligent than him, he is courageous,fearless. Museveni cannot kill Besigye, he is afraid of Winnie Byanyima - but he hates the man with a passion.

Museveni knows Besigye has charisma and is well organised.
Besigye is so organised that he has a succession team already, even if he dies today , tomorrow Team Besigye would have leadership and they would continue more viciously than before.
Report to administrator
0 #52 sula 2022-06-26 17:59
- Yes he had decided to kill Bobi Wine and God intervened,Yes Bobi Wine won the election but m7 know , BW is not Banquo , but the son of Banquo.

M7 is not afraid of BW, to lead a country you need to have tested ,mature ,determined ,team and some organisation, m7 he would disorganise NUP anytime, he threw 40m at them and wait for the results.

FDC /Besigye struggled with those monies,but Besigye still prevailled.And you need have solid men and women unwavering. Today you are correct Besigye can stand and unite the others - and that's why he has to reside in prison.
Report to administrator
0 #53 Akot 2022-06-26 19:16
Remase,
sula,

Museveni has made Ugandans their own enemies & is enjoying the mess - all that goes on is not fight against Museveni, but ensuring his continuity!

There will only be opposition to Museveni the moment tribal leaders stand down/forced, then UNITY will end M7 hold on Uganda!

Until then, powerless tribally divided ruled Ugandans will fight one another, while M7 rules, owns tax money, controls every institution as he's protected, legalised, constitutionalised with fake elections in the country that belongs to him!

- Those born under Museveni are 35

How old are opposition leaders helping divide Ugandans further & how old will they be by the time M7 dies of old age at +90?
Report to administrator
0 #54 Remase 2022-06-27 05:01
Sula, I don't have words to use to thank you enough, however, I hope and pray that Ugandans realize our predicament, but most importantly the need to unit against M7, his family, relatives and tribesmen who are intent on ruining our country beyond recovery.

Fellow Ugandans, we need to start somewhere; and that's having a leader we believe in. Without leadership, we are lost. No struggle anywhere has ever been successfully without leadership. It's not a secret that we must realize a fundamental change, therefore it ought not to be a secret of who should lead us to that objective.

Then reason why M7, his family, relatives and tribesmen are successfully in their mission to completely destroy out country is that we have failed to herd to Akot's repeated call for unity! Akuudira mu luyimba talunyumisa, Sula thank you.
Report to administrator
0 #55 Remase 2022-06-27 10:04
No one I know of who has called for unity than Akot. Unity is the only way to accomplish our objective of liberating our country from the destruction M7 has sunk our country into.

Let's heed to Akot's relentless call fpr unity under one leadership, as Sula has articulated. Agali awamu ge garuma enyama. United we stand, divided we fall. Besigye has shown the will, desire, determination and ability to lead us.

Fellow Ugandans, let's roll. The more we wait, the more the pain, and our children will never forgive us for leaving them behind such a ruined country.
Report to administrator
0 #56 sula 2022-06-27 10:58
Remase, thank you very much for your warm and kind words.

It was a pleasure comparing notes with a true son of our beautiful country .God gave us the most wonderful country (may be ) in the world, with wonderful people -the bona fide Ugandans not the refugees who pretend to be Ugandans.