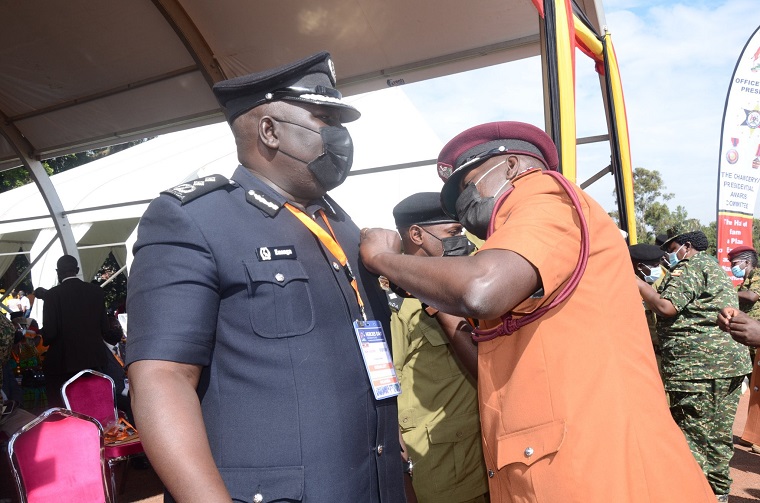 Fred Enanga (L) being decorated with a heroes medal

In March, a photo of the Uganda Police Force (UPF) spokesperson Fred Enanga, holding a catapult, with the caption, “Newly appointed Uganda police spokesman hits news reporter with a catapult for asking irrelevant question”, was trending.

Friends from outside Uganda sent me the photo desiring urgent confirmation of Enanga’s catapult skills. I happily disappointed them; no, our Enanga does not hit journalists with catapults.

Nonetheless, a Reuters fact check revealed the photo was shared on Facebook more than 150 times. AP news reported it was retweeted 9,000 times and received tens of thousands of likes across Facebook and Instagram.

It is likely the fake post started as a meme, for Enanga has become fodder for Ugandan memes, lampooning his deadpan comical utterances in defense of the police. This National Heroes’ day on June 9, Enanga was among 81 Ugandans who received medals for their service to the nation.

Enanga’s heroic ascension has provoked public debate, with many questioning the regime’s selection of heroes. Why is Enanga a national hero? In the run-up to Heroes’ day, the state minister for Economic Monitoring, Peter Ogwang, announced: “The police spokesperson Fred Enanga will be awarded for his work in police, including demonstrating high professional standards.”

On Heroes’ day, Enanga received the Golden Jubilee medal in recognition of his outstanding service and loyalty to the country. Enanga, speaking later to journalists about the medal, thanked President Museveni for the recognition, commenting: “It really shows that there is much trust and appreciation for the work you do as a police officer. I am happy that after over 20 years, I have been able to receive this medal.”

Enanga joined the UPF in 2001 where he has worked in various departments. He was first appointed UPF spokesperson in 2014. By virtue of his position, he is at the forefront of defending the police’s actions. To the public, Enanga, with his impassiveness, calm slow drawl, is the face peddling the regime’s version of the truth, sometimes ‘defending the indefensible.’

The National Unity Platform (NUP) leader, Bobi Wine has accused him of lying with impunity. In September 2021, prominent opposition MPs Muhammad Ssegirinya and Allan Sewanyana were charged with murder and attempted murder. The regime accused the NUP MPs of being behind the machete killings of elderly people in Masaka.

Enanga explained that the police arrested the MPs after several witnesses pinned them for organizing attacks “to sow fear among the population and make people hate the government.” In what started like a bad joke as Bobi Wine remarked, many months later, the MPs remain in custody as the public awaits the outcome of the charges against them. The opposition accuses the regime of political persecution.

It is no secret, right from the infamous rape trial of FDC’s Kizza Besigye, the regime regularly uses the courts to curb dissent. Enanga is at the frontline of defending the regime’s use of the courts and police to trample dissent.

In the aftermath of the 2016 presidential election, police held Besigye under house arrest for a month. Enanga, our consummate professional, valiantly doing his job, told the media the police had reliable intelligence that Besigye, if left alone, would cause public disruption.

Similarly, following the 2021 presidential election, police besieged the homes of Besigye and Bobi Wine. Enanga, armed with an explanation, quipped: “There were intelligence reports that some people wanted to cause disruptions during the swearing-in ceremony and we took precaution to provide security for some leaders, including the opposition leaders Bobi Wine and Besigye.” He added, “This is normal security deployment for VIPs.”

One of the funnier ones was when Enanga addressed the media before the 2021 presidential elections, alleging Bobi Wine planned to kidnap himself in an effort to cause mayhem. Enanga said Bobi Wine planned to cause a repeat of the November 2020 protests in which the police and military shot dead at least 50 people.

Enanga defended the police’s handling of the November 2020 protests, regretting the loss of lives but arguing that the police reacted appropriately even when a BBC investigation documented arbitrary killings of civilians during the protests.

Enanga also recently updated us: the police report on the November 2020 killings can be accessed after obtaining approval from the IGP and paying Shs 60,000 or Shs 70,000!

So, is Enanga a hero of outstanding service to Uganda? Ask Michael Muhima whom two men pretending to be National Water and Sewerage Corporation staff arrested in February 2021.

In November 2020, Muhima, then a 24-year-old law student, had posted a picture of Enanga captioned, “We arrested Mr. Kyagulanyi as part of our investigation into Mr. Amuriat’s missing shoes,” in reference to the police manhandling of the FDC presidential candidate that left him shoeless. Human Rights Watch reported Muhima was denied access to his family and lawyers for five days before being released on bail. For that tweet, mocking Enanga, Muhima was charged with offensive communication.

When we wonder how Enanga is a national hero for national heroes should unite us, we are asking the wrong question. We should ask: whose hero is he?

Enanga fits well with M7s outfit of naked lies. M7 took nation to the bush war in which innocent lives were lost for a false promise of a fundamental change. We ended up with the worst regime ever!

So, Enanga is M7's hero because he is good at pedaling lies for the worst regime. In fact Enanga is so good that he wrote a book, "ENANGA'S BOOK OF BEGINNERS," and Katikiro Mayiga, another Mz7 appeaser, was the fist to buy the hardcopy.
Report to administrator
+2 #4 Lakwena 2022-06-20 09:56
Tayaad Muzzukulu, Enanga is Satan's Hero and his decorating Special Agent,straight from Hell, non other than Gen Tibuhanburwa.

In other words, on behalf Great Satan and Tibuhabburwa, for decades and counting; Afande Enanga is lying all the way to HELL

But at leas to redeem himself, he should share some of the food he wallops with his skinny, bonehead Sign Language translator. .
Report to administrator
+2 #5 Remase 2022-06-20 10:13
We all know who M7 is. Enanga, as Tayaad Muzukula has described him, is a soft spoken smooth criminal talker who peddle lies with ease.

Apparently deceit remains deceit, no matter how you sugarcoat it. However, M7, like many other conmen, survives on deceit! That's why Enanga is M7's hero.

Our country is sinking into deeper destruction and/or ruins while our leaders like Katikiro Mayiga are busy reading ENANANGA'S BOOK OF BEGINNERS, and mastering the art of deceit to keep M7 in power for life.

That's why Mayiga passionately congratulates for rigging elections and further urges the nation to accept them, with clear knowledge that M7 is the master of deception! Then Kyagulanyi comes in with his mantra, "People power-Our power."