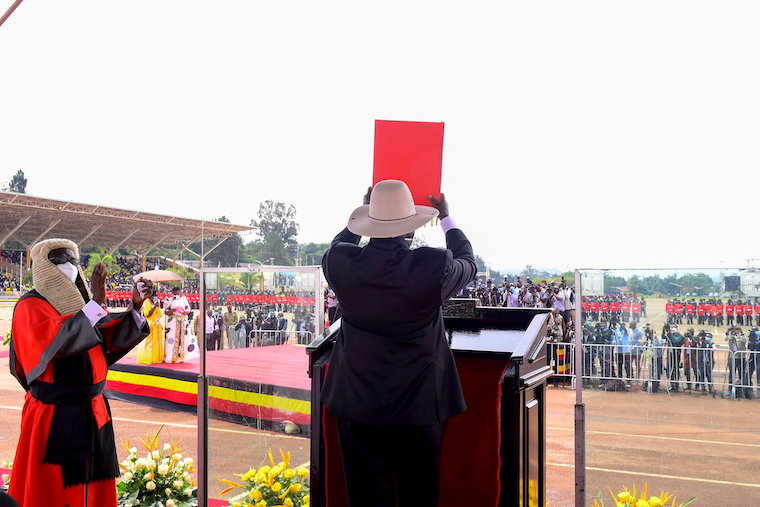 I have always wondered why an arguably weaker Museveni has been able to knock off 35 years as Ugandan president – and counting.

I say weaker because compared to his predecessors such as President Amin and Obote, these were stellar men with superior credentials. In terms of both military strength, organisational skills, intelligence network, wealthier populations, love for country, etc. these men edge Museveni by leaps and bounds. And they presided over smaller populations. But how come they did not last long in office?

Consider President Amin, for example: would it have been possible to knock Amin out of office had it not been for the involvement of Tanzanians, and the British who never stopped sabotaging and openly fighting him for simply chasing their colonial emissaries, and economically liberating natives? [Note that Indian/Asian expulsion from East Africa was an EAC decision to nationalise/liberate the regional economy – with Tanzania and Kenya expelling more Indians, without compensation.]

Often, there are two sets of responses to this puzzle (both problematically chant claims of Museveni’s genius). The first is disagreeing, that neither President Amin nor Obote were intellectually smarter, loved country more, and had stronger military capabilities than Museveni (both in terms of size and quality of arsenal).

I will return to the intellectual part.  The problem with surrogates talking about arsenals is that they are both ignorant chatterboxes, who also uncritically treat time as a bounded whole. When Uganda was ten million people, and USA had not invented drones, Idi Amin was unmatched in the region. And so was the military that Oyite Ojok presided over.

On the intellectual-patriotic front, commenters tend to point to the way Museveni seamlessly oscillates between technocratic governance (competitive politics, legislative, expert-driven autocracy), and outright bloody violence (like happened in Kasese in 2016 when he bombed an entire palace or Kampala in November 2020 when he mauled down civilians to instill fear in what he deemed hostile voting areas, with potential for protests).

In this spirit, they then point to “a Museveni-only” extensive network of security and intelligence.

My friend Jude Kagoro who is based at the University of Bremen published an interesting paper in 2016 seeking to explain Museveni’s long stay and stability as a product of what he and others have termed, “competitive authoritarianism.”

Here, Kagoro focuses on Museveni’s “coercive power as being the most instrumental factor that explains the continued stability.”  He points to the extensive network of control, which runs straight from President’s office to the Local Council chairpersons.

With the exception of LCs, the rest form a string of unelected, clannist, Museveni-appointed officials, disguised as coordinating security, but actually doing Museveni-long-stay political work.

Then there are “several other non-statutory coercive units and paramilitary groups which operate on an ad hoc basis,” including LDUs, Black Mambas, etc. [One wonders how Masaka Bijambiya unfolded with all these folks on the ground – and on taxpayers’ money].

Kagoro emphasises the internal cohesiveness and tightness of Museveni control machine, which enables it swift responses to potential political threats. [Implicitly, the suggestion is that Museveni predecessors lacked this sort of network, thus their easy downfall].

Faced with military opposition seven times since coming to power in 1986, Kagoro implicitly attributes Museveni longevity to the internal network described above.

Later on, extremely casually, Kagoro notes the claims some of these so-called anti-Museveni military campaigns were sustained or even started by Museveni himself to justify budgets, among other dangerous reasons. [Writing on the war in Northern Uganda, Father Carlos Rodriguez offered evidence to this claim in his 2009 book, Tall Grass].

Although explicit support from Libya, the UK and the United States is concretely documented, Kagoro gives it little attention and perpetuates the good fiction that Museveni’s struggle against Obote marked the “first time a locally grown movement overthrew a regime on the African continent.”

Even when he later acknowledges the conspiratorial love affair Museveni has enjoyed with the UK and the United States – built on access to resources – Kagoro does not grant it enough space in his analysis on Museveni’s longevity.

My contention is that a better understanding of Museveni and those who came before him requires carefully placing every man in their time. To do this is to see Museveni as both a lucky and smart-opportunistic man – a smartness that signals to an affliction of ‘small dreams and small pleasures.’

Museveni’s ascent to power (1986) coincided with the end of the Cold War—which meant the collapse of the Soviet Union and the end of the era of coups and proxy wars.

In effect, leaders that had just come to power had a longevity cheque handed to them as long as they wanted to cash it.  Check them out: Robert Mugabe, Daniel arap Moi, Paul Kagame, Yoweri Museveni, Hosni Mubarak, Omar Al-Bashir.  Many of these men went on to govern for over 20 years.

Even the young man Joseph Kabila tried manipulating the constitution to extend his reign, but internal pressure overwhelmed him. If not assassinated by one or a group of angry soldiers, or if not with an entrenched system as Tanzania’s CCM, one had the free-ride. With one condition: unrestrained access to the economy.

If the Cold War had been about anything, it was a scramble for resources – continued control and exploitation of “formerly colonised places.”  Indeed, on the heels of the cold war, came structural adjustment – a more disguised, more technical but more dangerous form of resource theft.  Basically, Structural Adjustment meant Europe and North America had found ways of taking over resources in economies of small countries without invoking the ire of populations.

The white man had learned that (a) if you killed their education systems, that is, make critical thinking skills a luxury, but produce only literate labourers – (b) take over key sectors such as banking, and telecommunication, and (c) monopolise their mining, and cash-crop trade, you do not have to have foot-soldiers on the ground.

(d) By fooling them that they were poor – measuring them against standards they do not have and actually do not need – you would force them to endlessly come to you for credit.  (e)Every time they come begging, you would make endless bargains that enable you access to their resources. (f) Pushed to the wall, you will then buy off leaders and critical voices with token personal offers.

When the white man returned to Uganda – Mamdani has written in Scholars in the Marketplace – they found an exceedingly willing ally, a comprador dyed in wool.  Insecure about his future as president – governing in foreign land in Buganda – Museveni realised that the only major threat actually came from Mzungu whose problem was unrestrained access to the economy.

If this were granted, Mzungu would actually protect you in power.  Museveni simply handed over the economy, starting with returning so-called “Indian properties,” (to the point that he had even agreed to incinerate evidence that Idi Amin had paid for all these properties) and returning Indian monopoly in coffee and gold trade.

The point I am making is this:  until recently, on our own, Africans have never had power to dislodge any governments (worse in Black Africa). For the first 35 years of independence (1955-1990), foreign forces couped or killed our leaders for sport.

Nowadays, these powers do not care as long as that sitting president delivers them the economy. This is Museveni genius. Exactly, we are still a colony – at 59.

Developed world leaders haven't realised they get 5 years, fail to get second 5 years term so they ensure demon Museveni's post/lifetime rule as Ugandans are doing!

Worse, USA/Europe are still memebers financing UN that flurishes through dictatorship/wars in shitholes while ensuring migrants looking for better life are taken in developed countries!

UN has no principles, doesn't care about good governacne in shitholes, yet the body is financed by developed world at pain handling migration!

American/European politicians fight for leadership with no programmes to handle migration, the cause of their political unrest!

Ugandans will end up landless & it's them ensuringtheir own destruction by maintaining the tribalistic system Museveni put in place!

Museveni was there watching and making his calculation on how to take over power in Uganda and rule Uganda untill he die in power.

Do you blame him when those in the central never cared about the country called Uganda yet they carry the passport in the name of Uganda passport?

Buganda should by now know that Museveni used, uses, will use it to finally own every tribal land & thyis include Buganda!

Buganda MUST wake up before it's too late!

But then again, all the other tribal leaders & tribes without tribal leaders are with Museveni, waiting for him to officially, legally, constitutionally own Uganda, right?
Report to administrator
0 #23 Akot 2021-10-19 14:07
Quoting Oruk Charles:

The western world would not force any leader on us.

If Baganda rejected the NRA/M war in their region, would Museveni be in power today? No.

Would the British or US bring him by force on us, no. Untill we start to speak the truth, interllectuals like you will keep on lying to Ugandans and we keep on making mistakes.

Then Ugandans will have to form the kind of governance they want immediately!

Why is the tribalistic system still standing & tribal leaders with ensuring Uganda belongs to Museveni's family?

Why are Ugandans ensuring they are Museveni's family slaves for good?

Not 1 tribe has leadership!

Museveni lasted all this long because of the support he got and continue to get from Buganda region where the capital city of Uganda unfortunately is resident.

Uganda can only be free and united if those in central (Buganda) realised that Uganda is the only country they have recognised internationally and by uniting to built it, is the only way to stop dictators and bring peace and development in the country. Political lies will never help us.

What a pitty, kabaka of Buganda doesn't see he's leading Bagandans to hell as Museveni will finally own every tribal land!

But then again, all tribal leaders are with Museveni, which means they are more evil, heartless than migrant Museveni!

Blaming the west everytime we have probme will never help us. We Ugandans are our own problem.

We accept lies so long as we benefit from it. The problem of Uganda has been the selfish interest from Buganda political and tribal leaders.

This is the truth which many Ugandans are afraid to speak.

Only now things have changed with the coming of Hon. Kyagulanyi. Before that, no.

Can you imagine what the situation could be if Kyagulanyi called tribal leaders to stand down & to UNITY of Ugandans?

Museveni completely destroyed Acholi, yet Acholi tribal leader/elites are with the demon ensuring his ownership of Uganda, thus enslavement of Ugandans who just go along suffering in silence yet tribally divided & ruled by their common enemy, WHY?
Report to administrator
0 #26 Akot 2021-10-19 14:33
Oruk Charles,

It's heart breaking, Ugandans don't see Museveni is a conqueror who has no tribal land in the zone, doesn't care how he'll leave the shithole & its naive people in when he dies of old age & the son takes over!

Brainless, heartless tribal leaders aren't even aware they don't know one another, yet used by Museveni to enslave Ugandans!

Subjects/Ugandans aren't aware they will be in worse situation when Museveni dies of old age!

Worse, fake mps believe Museveni is eternal & fake elections will go on for ever!

Ah! Ugandans aren't aware they have ensured they are alone with Museveni & family as long as they maintain the tribalistic system that goes against International Principle!
Report to administrator
123