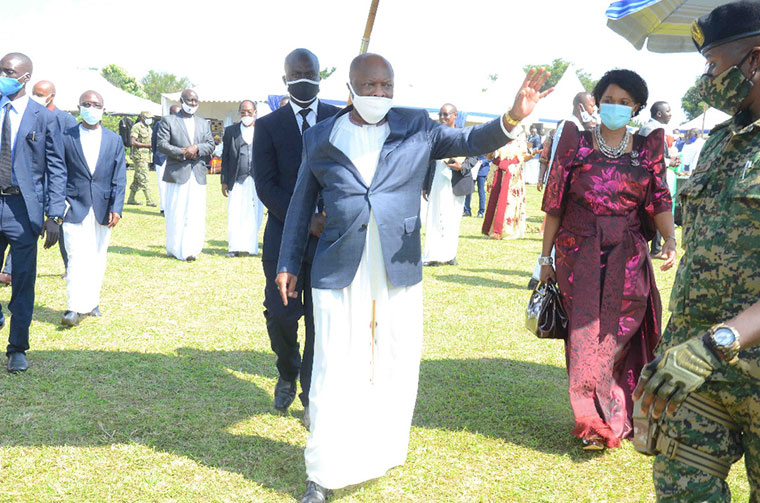 With all the gossip about the Kabaka being poisoned - and whispers pointing to President Museveni - I feel Museveni's pain.

Especially since he has nothing to do with it, he must be bursting with anger. You know what I mean?

Recall the story of a witchdoctor who lost a client who had come to her shrine with an acute health condition, and died inside the shrine moments after arrival? Yes, the witchdoctor had all her shrines burned down, beaten and kicked off the village. She was innocent.

But her actual crime was the difficulty to explain her innocence after villagers had suspected and complained about her shrine being involved in murderous ritual sacrifices.

If the beloved Kabaka passes from the condition witnessed a few weeks ago (May God forbid), the jury is out already—and Museveni is guilty. A combination of reckless utterances — “ffenga Abaganda, ffenga abaganda, otunude Kabaka mu kamwa, we will crush those enemies”— and suspicious deaths of high-profile persons conspire against Museveni.

Despite his innocence, no one will believe him. Although no one will dare seek to ostracise him in the immediate present, his fate will not differ from that of the witchdoctor above. Dear reader, besides wishing His Royal Highness a quick recovery, I have no business with these infectious stories and rumours about his health circulating in our numerous gossip corners.

Like the gossip, whispers, anxiety and deception around the king’s illness, Uganda is in the same condition of endless gossip, suspicion and deception. And I do not say this as simple rhetoric but, rather, as historical and contemporary reality.

Let me start from the beginning: when northern Ugandan-born singer, Eezzy, released the Covid-19 satirical song, Tumbiza Sound, credit was given to the strength of the song, and how a star from the north of Uganda can actually hit music charts in the capital, Kampala.

What was missing in this line of analysis of the song and its greatness was that, Eezzy, whose original name is Eric Opaka, was able to break through only because he Bugandanized his art. He had been singing in his native Acholi for long before Tumbiza Sound.

The song is in Luganda, which is the defacto language of cultural production in Uganda. Indeed, unless one is told that Eezzy is Eric Opaka and is Acholi, he could actually pass for a Muganda, and earlier Buganda arrivals are happy to embrace him as one of their own.

The challenge for all Ugandan leaders is that they have to work with Uganda to develop the country. If you fail Buganda, you have failed the entire country. I know it is not a likeable proposition for many non-Baganda elite. It sounds like arrogant Buganda supremacism. My friend, novelist and soldier Ulysses Chuka Kibuuka calls it ‘Buganda self-delusion.’

But who are the Baganda anyway beyond a cosmopolitan idea and endlessly expanding group of subjects? Perhaps this argument is about the region called Buganda, those who live in it and its iconic representation of the Kabaka. Failure to grow this region and its people means stagnating the entire country.

Yes, it is that fish which starts to go bad from the head, and the opposite should be true: a good head means the entire fish is good. I can feel Museveni surrogates bursting their heads on my proposition above.

They believe their man has actually developed the country—as explanation for the humongous amounts of borrowed money. Have you not seen the roads, they ask. One of them actually uses Kampala’s traffic jams as explanation for this growth. There are also generous stats and figures to back up their man’s performance.

Perhaps, I need to admit my handicap in assessing Museveni’s presidency. I am not a traditional political scientist who finds figures fascinating for analyses, but a playwright with training in anthropology and history.

And for hanging around with historians, I masquerade as a historian, sometimes. Thus, on the strength of historians and anthropologists, I have argued plenty of times that the only time Uganda saw actual prosperity was when President Idi Amin enabled Buganda to take charge of the economy. This happened in 1972.

As natives were liberated from the backwaters of the economy, with the region and the people in Buganda taking the lead, the country prospered. And this prosperity spread.

If not blinded by deafening noises of an “economic collapse” after the economic war; if one is able to appreciate the fact that biting sanctions imposed on Uganda by the departing imperial power, United Kingdom, who had wanted the deputy-colonialists to continue milking Uganda, one will see that any economic pain under Idi Amin was the handiwork of an obsessive colonialist.

Then one will see how living conditions actually improved amidst external aggression from the wide world—ushering in modern Uganda. The coffee trade prospered, growers’ unions and native cooperatives thrived, and in turn there was money in the hands of ordinary folks.

In the area of health, a recent book by Dr Olive Kobusingye, The Patient, is emotional on how Mulago hospital was a truly national hospital in Uganda under President Amin: fully equipped with medicine and other supplies, doctors fully facilitated [with supermarket and fuel pump inside the Mulago compound for easy access] and sumptuously remunerated.

Mulago was the hospital of choice for the region. As this was happening, President Amin actually mended ties with the people in Buganda by returning the body of the Kabaka Sir Edward Mutesa.

Let’s move to the present. Take Kampala as a microcosm of Buganda region. Museveni has stubbornly refused to invest and grow Kampala and its surrounding areas. After Jennifer Musisi’s makeshift cosmetic gigs on the city, Kampala remains a mess. You have seen this place when the rains come down. The so-called city drowns.

The blighted and ideologically handicapped transport system, which privileges the owners of capital over their labourers, tells a story of a ‘normalised makeshift mentality.’ In just a five miles radius away from the Constitution Square, one is met by the foul stench of sprawling ghetto unable to collect its rubbish or even cover its sewers.

The peasant economies in the Buganda countryside upon which the city thrived were killed and buried. Coffee growers’ union in Masaka, Kyaggwe and Bugerere were collapsed and closed. Growing food crops for the nearby markets such as maize, cassava and beans has become unprofitable and useless.

Young able-bodied men who once tilled the land for livelihood now overcrowd Kampala’s streets atop motorcycle taxis in the blighted makeshift spirit of okulembeka, philosophised by the president.

And while this is normally narrated as individual laziness and choices of the riders, it is in truth a mode of governmentality simply depoliticised. You find this mess and confusion reproduced across the country – since once Buganda sneezes, the rest of the country catches the cold!

President Museveni could be a gone case, but subsequent presidents will have to appreciate, although painfully, the symbolism of both the kingdom, and the region called Buganda to the rest of the country.

Journalist Timothy Kalyegira has often spoken about the pain of voting in Kiruhura and having to drive to Kampala to take up the seat of the presidency. Does Museveni still see himself as a representative of Kiruhura, and not the president to vote in the capital? Perhaps the challenge is failure to see what Eric Opoka did — Bugandanise self and craft.

As a hard core criminal, Saleh is not even fit to be a kiosk manager, but M7 rewarded his brother with billions of money every year in a scam of operation wealthy creation!

Remase, it is a matter of retrieval emphasis: Gen Tibuhaburwa is the Author and Flagship of corruption.

Why do I say this? In 1987, the Daily Nation asked M7 what he thinks about Corruption.

With a straight face, the man said he has no problem with corruption, as long as the proceeds from corruption is not stashed away in Swiss Banks, but invested in Uganda.

In other words, you know a man's character by what he condemns and/or extols. All the so call progress (all the hurry worry real estate development) are the fruits of corruption, sanctioned by "Our Problem of Africa".
Report to administrator
0 #43 Lakwena 2021-05-04 07:41
Because of the love for money; it is very frustrating to see apparent reasonable dressed up people literally worshiping a self-confessed evil man.

In other words, they are accomplices and the perpetrators of injustice and crimes against Ugandans.
Report to administrator
+1 #44 Wooden K. 2021-05-04 11:42
On the next street , our Space Scientist has just discovered that he parked his rocket on a wrong planet
.
Incredible Astronaut JB has left the building !

I saw it coming . Because the bulaaza is Muganda ( aren`t they all) , I had written a beautifull farewell poem in Luganda , which beloved Observer refused to publish.
No hard feelings
Report to administrator
0 #45 Lakwena 2021-05-04 14:08
Quoting Wooden K.:

On the next street , our Space Scientist has just discovered that he parked his rocket on a wrong planet
.
Incredible Astronaut JB has left the building !

I saw it coming . Because the bulaaza is Muganda ( aren`t they all) , I had written a beautifull farewell poem in Luganda , which beloved Observer refused to publish.
No hard feelings

But Bulaaza Wooden, why don't you transrate your poem into Ingrish. Then maybe the Observer will pubrish it.
Report to administrator
0 #46 Wooden K. 2021-05-04 18:35
Lakwena , there are some things that cannot or should not be translated.

Frankly , I don`t see what the big deal is . One poem in Luganda , written by a Muganda intended for another "muganda" in Uganda is no great violation , or is it ?!