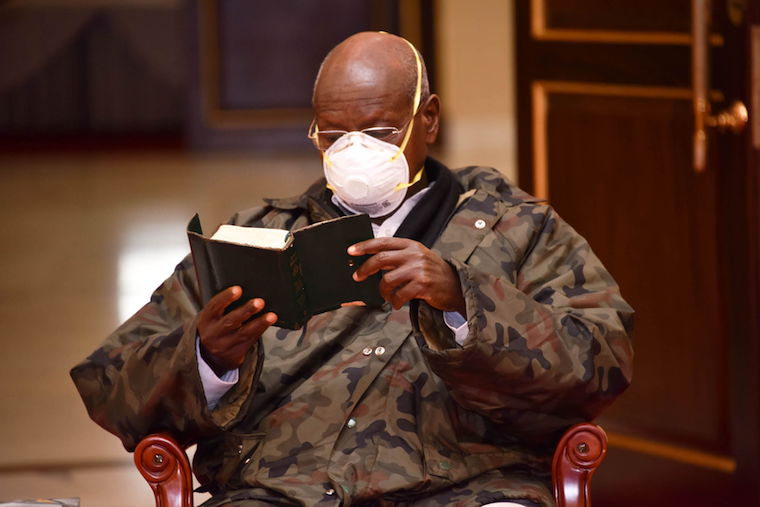 Those who hang around President Museveni on a daily basis tell stories of an old tired fellow.

His brain is still sharp, but the stamina is terribly depleted. He wobbles through his paces, and his clothes appear loose and oversize. We have seen him enter deep sleep on live TV, and memorably watched him break cough and spit sputum into a napkin!

Rumour has it that the man sometimes sleeps throughout an entire cabinet session only to wake up to confirm – and own – resolutions. These are not personal failings, but realities of old age and a stressed life. What they also reveal is that the man isn’t in charge anymore.

But a brave face of those calling the shots – and pushing him forward. We need to believe Mr Museveni when he tells us he doesn’t want to be in power. He has had a good life – and would undoubtedly enjoy a good one if he peacefully left office.

There is no reason why after 35 years in power, at 76, one still braves the stresses and insults that come with the presidency. I am getting convinced Museveni is not as obsessed with the presidency as he is made to appear. In truth, Museveni too, needs liberation from those clearly pumping up his ego to appear he is greedy for power.

If we could take any lessons from the cold murder of Zebra Mando by security operatives, it is that Museveni had not been briefed of the entire operation. Nor had he been told about the gist of his scheduled meeting with the boxer about to be slain.

This is why he hastily came out to [un-strategically] apologize. Surely, Museveni is the unsuspecting (self-deluded?) agent of deeply-invested local thieves, who continue to dupe him with praise songs of an endless visionary. Identifying these men and women would be the first steps towards freeing Museveni and the country.

Either these noble men and women are engaged cordially, or confronted directly. I have some clues on where to find them. In the heat of the just-concluded election campaigns, I published the article, “Who else will be falling with Museveni?” in which I revisited an investigative story that The Independent Magazine had published over a decade ago.

In that article, I showed that if Museveni were to fall, there were hundreds of individuals, groups of people, companies and professionals – who have unfairly profited from Museveni’s regime – and will close shop as soon as the man falls.

Now that Museveni is still clinging onto the presidency – by a scorched-earth policy – it means those chaps, groups and companies are still fighting. I return to this article as a reminder of who these folks are and that they need to be engaged not to plunge the country into chaos.

They are more dangerous than Museveni could ever be. Because these fellows are not in the public domain, not as loud as the scrawny NRM politicians and surrogates (such as minister Anite, Gen Elly Tumwine, Emmanuel Ddombo, Ofwono Opondo), it is easy not to see them or even appreciate their power.

*** Sometime in 2008, the then radically critical magazine, The Independent, did the story about an enigmatic group, Nyekundiire. The central thrust of the story was that immediately after one election, this group of pro-Museveni individuals started to mobilise for the next election.

If ‘No-Change’ was a rebel group, then this was them. Meeting in one of the member’s mansion on a rotational basis, they pledged allegiance and collected funds – huge sums, hundreds of millions – for the next election. In these meetings, they would negotiate the next lucrative deal and how to facilitate each other in their hunting expeditions through their direct
lines to key decision-makers in the land.

They also debated who next to conscript. By the time of writing the story, the group was coordinated by Willis Bashasha, then senior manager with Uganda Revenue Authority (URA), and the patron was comrade brother, Sudhir Ruparelia [I have never understood his political crimes that ended in the closure of his bank].

The newest recruit was Peter Ssematimba, who had recently contested for the position of mayor in Kampala, and despite losing to Nasser Ntege Ssebaggala, had generated some energy for the NRM in the capital. He was also a prominent investor, and a genius around these Kampala streets [Was he pastor then?].

It was a bold story we did, we were explicit on names: Kiwanuka Kiryowa, Allen Kagina, Willis Bashasha, Robert Mwesigwa, Shedruck Nzeire, Hassan Basajjabalaba, Odrek Rwabwogo, Robert Kabushenga, Moses Byaruhanga. Others included Aya Group, Katambuka Rwakajara, Grace Kafura, Godfrey Nyakana, Kellen Kayonga, James Kakooza, Abbey Mayunga, Godfrey Kirumira, etc. [The Independent has not pulled this story down, but has not updated its reporting on the group either].

No-nonsense editor Charles Bichachi made sure the story ran despite our managing editor, Andrew Mwenda, being conflicted and openly opposed to the story. [The reporter for this story – name withheld – was confident our MD was another of the newest conscripts].

As you can imagine, this is no club for the poor or morally/religiously inspired idealists. The chaps here are street-smart, egregiously ambitious, ruthless and remorseless. To receive invitation, one has to be rich – by local standards – with big plans and ambitious enough to fight their way up.

Joining the club means both facilitation from high offices, but also giving back. The people here win juicy tenders, and also have special pass with Uganda Revenue Authority. If they are unable to enter their merchandise via Lake Victoria Gaba landing site, URA will look the other way. [But once they turned their horses against Museveni, the watchdogs including URA, parliament, or any PS would swiftly come for you. We vividly recall the story of Nomo Gallery in Nakasero, when Gen Elly Tumwine voiced support for Gen Sejjusa’s claims of a Muhoozi project; Speaker Kadaga and then Gender PS Pius Bigirimana were the attack dogs].

Mind you, Nyekundiire honchos have no public office, but blossom in influence and power. They could be loosely called, the “deep state.”

To be rich in Uganda, to have a thriving business, you need to be in good books with any of these fellows. By the time this story ran, they were estimated as only about 200 members. Over 10 years down the road, this number must have multiplied by leaps and bounds. Not too long ago, President Museveni publicly acknowledged the investment potential of this group. [Well, the president may never have received the memo, as this is supposed to be a covert no-press organisation]. ***

Why am I re-telling this story – again? These noblemen and women continue to work tirelessly to benefit themselves but also make sure Museveni pushes on. They are deep into things and, because their access has been shady, they see Museveni is their only guarantor – and are pushing him on.

They have also conscripted an extensive network of surrogates, politicians, and beneficiaries who endlessly chant NRM slogans like prisoners of war. These fellows form the brains of the NRM, and in close conversation with the military – through comrade brother, Gen. Salim Saleh [Hon. Ssemujju Nganda recently described him as co-president] – they decide the next moves for the country.

Those seeking change – especially the young people - need to engage these men and women directly. The engagement could be dialogic, or confrontational – depending on the language those in power are interested in using.

Well, we all gonna die, so! Does that mean we should sit by and watch our country being ruined, simply because M7 will die one day?

Is that your strategy? That let's wait and see, you know, after all, M7 has to die, right? Guess what, even Sadam, Gaddafi, Mugabe, Obote, Amin and others died too.

Look at what M7 has done to our country in 35 years! If we have to wait for age and death to the their own course, we are in for it and our children and grandchildren will never forgive us. American are forever thankful for their forebears/forefathers for leaving behind the greatest nation on the planet.
Quote | Report to administrator
+1 #43 Remase 2021-02-01 08:54
Opolot, guess what, I won't stop. If anything, let me double down.

Mengo/Mayiga/Mutebi, the triple M are the reason why M7 is still in power and/or has ruined our country for 35 years.

If they are to pull the plug/rug, M7's days would be numbered. Take that to the bank. Don't get me wrong, I'm not advocating and/or seeking for their direct or indirect support of the struggle, not at all.

Let them keep quiet and stop acting and being friends of M7. For the first time, Mayiga should keep quiet. Please don't congratulate M7 for rigging the elections.
Quote | Report to administrator
0 #44 Remase 2021-02-01 08:54
Opolot, guess what, I won't stop. If anything, let me double down. Mengo/Mayiga/Mutebi, the triple M are the reason why M7 is still in power and/or has ruined our country for 35 years.

If they are to pull the plug/rug, M7's days would be numbered. Take that to the bank. Don't get me wrong, I'm not advocating and/or seeking for their direct or indirect support of the struggle, not at all.

Nyekundire Group has been effectively been substituted by PICK POCKETS and SHOPLIFTERS loudly headed by one FULL FIGURE and smooth operator Balam.

The pick pocket group is so weak,stealing crumbs and sharing crumbs with many local psychofants.The real money is with Nyekundires.

The pick pockets offcourse also include Ofwono Opondo,popularly known for robbing underwear at Garden City.
Quote | Report to administrator
0 #46 kirya 2021-02-08 08:03
All Ugandan are to blame . What have you done or are planning to do?

This man is a killer. Those who support him and worship him for the little posts he gives out remember you will be next to disappear. The family of m7 has no friends.
Time to claim our country back
Quote | Report to administrator
12345
Refresh comments list
RSS feed for comments to this post
Add comment