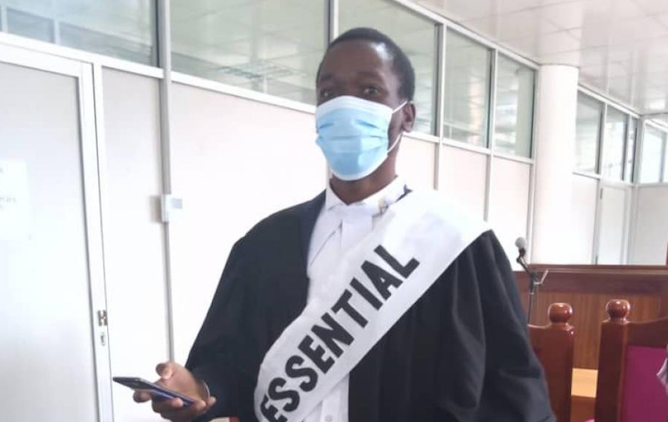 There is an interesting essay titled, “The fate of an honest intellectual” that Noam Chomsky wrote about “rebel” American- Jewish scholar Norman Finkelstein.

The essay focuses on incidents that happened in the 1980s when Finkelstein, as a graduate student at Princeton, exposed the American intellectual community as a “gang of frauds.” [This essay appears in a 2002 book titled Understanding Power – for those interested].

But going against established gangs of fraudsters common in our societies, who often masquerade as serious people, comes with serious, life and career-threatening consequences. Let me finish Finkelstein’s story first, before I turn to advocate Isaac Ssemakadde, the subject of this essay.

There was a book by a woman called Joan Peters, or was signed off by Joan Peters, that was the big hit of 1984. The book, From Time Immemorial, argued that Palestinians were recent immigrants to the Jewish- settled areas of former Palestine.

The idea was that if the Jews kicked them out, there was no moral issue since they were recent immigrants! This book had received plenty of rave reviews from most of the journals and big-name scholars in the USA.

Everybody was simply raving about it. But when Finkelstein curiously and meticulously went through its footnotes – there were many of them – he realised the book was a fake. He wrote a small critical review and sent it to over 30 scholars and publishers who had been hysterical about this book. Not a single one responded except Chomsky – another radical.

The review was never published. But when the book appeared in the UK, it was blown out of the waters as a fraud, “which does not even reach the level of nonsense, of idiocy.”

But that is not the story I want to focus here. The effects of Finkelstein’s exposure of the American intellectual community embarrassed them to the bone and they hit back furiously.

Scholars at Princeton, expected to be a serious place, stopped reading his graduate work, and literally shunned him. They only awarded him his PhD out of fear of embarrassment. Since then, Finkelstein has been a persecuted scholar and activist.

In a 2012 documentary, “American Radical” by Aljazeera, Finkelstein, for his critical work and standing with the downtrodden – especially Palestine – has been denied tenure at universities, and sometimes kicked out of apartments. This is the life of an honest intellectual, activist, politician in the era of egregious capitalism, and structured injustice.

I was reminded of Finkelstein’s trials and tribulations after my friend Isaac Ssemakadde was arrested recently for describing the new director of public prosecutions, JF Abodo as just “another rotten tomato,” whose ascension to that office was not a product of her legal- intellectual prowess, but simply that “she has a vagina, and comes from Karamoja.”

A consummate defender of the downtrodden, Ssemakadde went crazy, and in techniques – initiatives of language – associated with his client Stella Nyanzi, tweeted blasting the DPP. His anger did not go unrecognised.

In an expected turn of events, sycophantic corporate groups and seemingly serious people came back like hungry hyenas: the president of Uganda Law Society, condemned Ssemakadde’s radical rudeness, ignorantly framing through the lens of morality.

Simon Peter Kinobe cited hackneyed claims of “noble profession” “decorum worthy of their skill” and some other populist chants, that are good for absolutely nothing.

There was more coming: FIDA, a body of women lawyers – in pursuit of narrow ambitions of presence and representation – endorsed ULS. Uganda Christian Lawyers Fraternity (UCLF), an association of born-again Christian lawyers, had their WhatsApp abuzz with agitation to condemn the professed legal rebel.

That these groups were silent over the torture of the MP, and simply acted like cartel can be best described as “a gang of frauds.” Embarrassed for their silence in the face of evil, they are harnessing their guilt into some incoherent moralising. Many Ugandans have come to know Ssemakadde for his bravery in standing with the downtrodden – often de gratis.

His successful representation of queer scholar and activist Stella Nyanzi stands out as the most renowned. But he has quite an “essential” resume.

Not long ago, he challenged and successfully won an appeal against the illegal compensation of city businessman Basajjabalaba, and the merchant has to refund Shs 170 billion to Ugandans.

Indeed, like Norman Finkelstein, in being this type of advocate/activist, Ssemakadde lives a difficult life. Lanky and sort of frail-looking, you will find him walking the streets of Kampala like a tired street vendor, eating in dingy eateries downtown.

He has not been swayed by the corporate lifestyles – of SUVs and air-conditioned offices – that define the otherwise ugly lives of his colleagues in the trade, now moralising against him to safeguard their places at the dining table, amidst the starvation of many.

Like many others like Ssemakadde – Nicholas Opiyo, Asuman Basalirwa, Adam Kyomuhendo, etc. – theirs is service for legacies, not fortunes.

There is no one doubting that he has done tremendous work with the causes he chooses to pursue but we don't have to applaud him by trying to bring down the others members of the noble profession.

But that is all a side show. Yusuf, as a friend, you should have called him out esp in relation to his most recent outbursts. There's no two ways about that.

The DPP is new to the office, she has earned the right to be there, she is well learned and generally well spoken. Why reduce all her accomplishments to a mere body part and gender because you have a disagreement with her? You don't justify this kind of thing in any way.

It's sad that you chose to justify his actions based on what happened to the MP yet the two are completely different.
Report to administrator