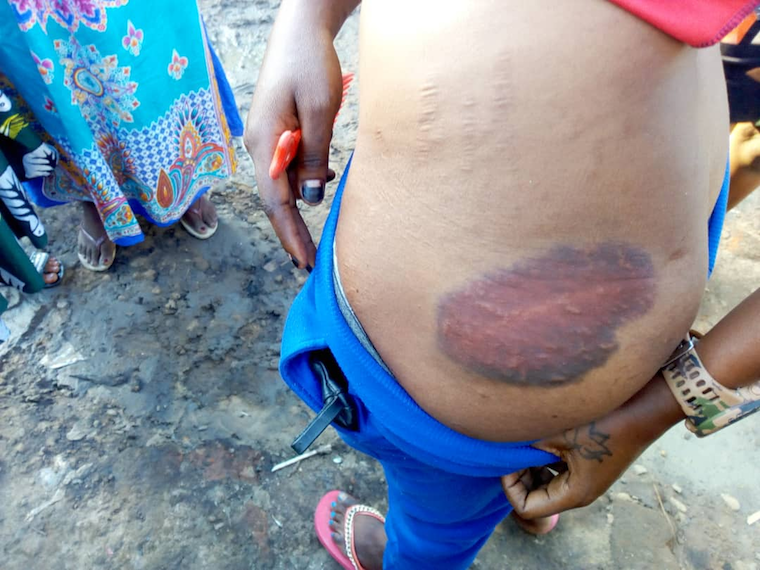 Woman shows bruises on her body following beatings by LDUs in ELegu on April 3, 2020

If police brutality were the antidote for the coronavirus disease, we would not need scientists to end the devastating pandemic.

The cruelty with which security forces enforced President Yoweri Museveni’s ban on the sale of non-foodstuffs in markets, and public transport was so horrifying!

It appears the president’s directive was susceptible to multiple interpretations and meant different things to security forces; in particular the Local Defence Units (LDU) askaris. To them, the directive meant arming themselves with assault rifles, batons and honing their brutalizing skills.

They generally prepared themselves to unleash terror on the citizens. Mainstream and social media showed overly enthusiastic LDUs beating Aloyo Hadijah with glee, a widow and food vendor who was found on the streets of Kampala selling food. In Mityana town, a retired army officer, Maj Gen Kasirye Gwanga also commanded soldiers to beat whoever was found operating a shop.

Even after the minister of Trade, Industry and Cooperatives, Amelia Kyambadde, condemned the police, army and LDUs’ clobbering and destroying people’s merchandise, some officers continued unleashing terror on citizens. The soldiers and other enforcers need to be reminded that the Constitution and its attendant Bill of Rights have not been suspended.

Treating a person in an inhuman and degrading manner still remains an offence and the security forces should remember that they are personally liable for these offences.

They cannot be exonerated by claiming they committed the offences while enforcing the president’s order. These guidelines direct all
law enforcement officers to abide by the law and the service standing orders in the arrest and handling of arrested persons. Further, the chief of defence forces (CDF) and the inspector general of Police (IGP) should rein in their officers to desist and avoid situations of unwarranted deprivation of the right to security and liberty of the person, harassment and extortion of Ugandans.

The boda boda riders and taxi drivers have been the worst victims of this extortion. When they fail to part with money, then brutality is the natural response from these enforcers. It is also in the interest of the country that security forces remain healthy while doing their work.

For instance, while the public is urged to maintain social distances, security officers are still seen walking in groups of more than six persons.

We have not seen these enforcers properly dressed in protective gear. They too are human and need protection from the fast-spreading virus. We wouldn’t like to have a situation where the enforcers ultimately become the unintended victims of this virus.

+1 #1 Jama 2020-04-08 22:32
This paramilitary force which formed in support of the political police was trained and mandated to use violence as a modus operandi.
Report to administrator