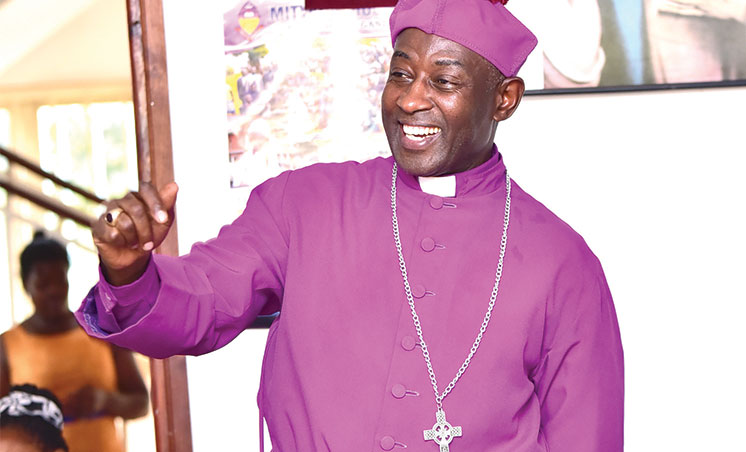 When the House of Bishops convened on August  28, 2019 to elect the ninth Archbishop of the Province of Church of the Uganda (COU), one indeed felt most happy that Bishop Kaziimba of Mityana diocese, had emerged best-suited for the role.

We trust that in Kazimba, the province has received a non-worldly chief shepherd equipped to offer the much-desired leadership, to inspire afresh the spirit of Anglicanism among its youth, especially to refocus the administration of both its affairs and programmes so as to inspire its holistic growth across the entire province, and not just some sections of it.

The archbishop-elect comes at a time when the COU lacks a sound political theology necessary to counter the intrigues of Uganda’s secular politics. In fact, his immediate predecessor has several times hushed critics who resolutely dared him to discharge his ‘political’ mandate.

Thus, we have often had and still have great difficulty in determining whether he speaks officially as Uganda’s archbishop, bishop of Kampala and chancellor of the Uganda Christian University (UCU); or privately as Rev Stanley Ntagali!

Little thought has been given to the centrality and impact of sound doctrine in modelling the spiritual life plus character of Anglicans in Uganda—to the extent that today, the COU is fast losing its identity and can easily be mistaken to be part of the so-called ‘Pentecostal’ movement—except that one is just yet to witness electrocution of believers and ‘soccer matches’ inter alia in ‘our’ sanctuaries.

Far more awful to note, is the manner in which many of our ministers—whether in purple or grey or black—have yielded to the wicked lure of searching for the lost coin rather than the lost sheep; not to mention those caught ‘feasting’ on their own ‘sheep’.

To put it crudely, the COU is infested with unscrupulous persons taking advantage of the gaps within the structures to steal church properties, chiefly money and land. To our dismay, they have been rewarded with titles or higher positions.

One, for instance, may wish to inquire into the spirit behind the creation of the Church Commissioners Holding Company Ltd (CCHCL) as a parallel body to the Registered Trustees of the COU! Or the wily extension of the boundaries of Kampala diocese into Namirembe and Mukono dioceses, divergent to the recommendations of the Bikangaga Report on the ‘Survey on Administration and Finance of the Church in Uganda’ hence the COU Provincial Constitution of 1972 (as amended in 1994 and 2016).

These, as history reveals, have grave legal, political and socio-economic ramifications not only for the COU but for the entire country, as well.

This rather unhappy train of events entreats one to seriously reconsider the prospect of sturdy regional provinces under a federal arrangement as just but one way of stemming it. This has a basis in covenant theology and is, therefore, biblical.

Also, for a very long time, the COU has been deluded by some quarters to believe that her stand against the instruction of unbiblical stuff means thus: a split-up with fellow Anglicans who have a contrary view. The COU ought to be far too aware of the victims within her own ranks, who, every Sunday have to feed on ‘biblical/theological (un)truths’ by the very preachers she herself has afforded the pulpit.

The Anglican Communion, as Michael Ramsey (the 100th Cantuar) defined it: “is a family of Anglican churches…of a good [vast array] of races… [with] a common expression of the Christian faith—the Bible, the sacraments, the episcopal ministry and a good deal of tradition that holds us together; and we’re all in communion with the See of Canterbury, and the Cathedral in Canterbury is just a kind of a symbol of our common unity.”

The split-up, then, is un-Anglican and sadly, we now lack basis to stay with that tag. Finally, the archbishop’s office has both a constitutional and canonical mandate. Just in case the prospective occupant feels pangs about discharging the same, there is no point for us to ascend to St Paul’s cathedral on Namirembe hill to witness his installation come Sunday March 1, 2020.

The writer is a lawyer and concerned Christian.

The love for money has reached quantifiable levels in the Anglican Church. I think Ntagali has been the worst Archbishop...the Anglican church got a raw deal in him.

For instance, for all the injustices this government has put on the citizens, he has never come out to condemn any. The biting poverty, unconstitutional rule, corruption etc, the guy remained silent.

I think inside those robs lies a mafia and corrupt soul. His legacy has been bad, he will be judged harshly.
Report to administrator
0 #2 Jonathan Mwesigwa S. 2020-02-20 10:15
Thank you Wazza! The sooner we wake up, the better.
Report to administrator
+1 #3 kirya 2020-02-22 03:51
The Church has to look out for the interests of the voiceless. Hold the politicians accountable.

Preach the gospel of better governance. Chase the thieves out of our houses of worship. Demand an end to dictatorship by allowing peaceful power transfer.
Report to administrator