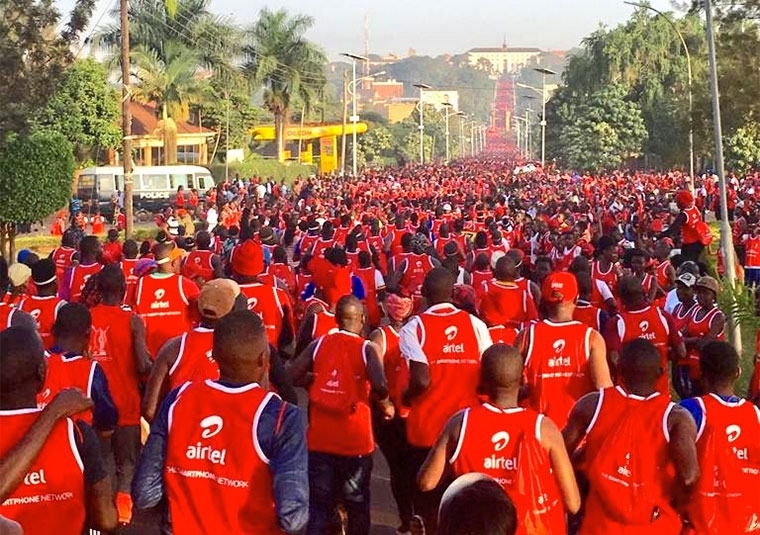 On Sunday April 7, hundreds of Ugandans participated in the Airtel Kabaka birthday run to raise funds to fight sickle cell disease in Uganda.

Sickle cell is an inherited blood disorder which causes progressive organ damage and episodes of severe pain and acute illness. These episodes result from the sticky and stiff red blood cells which clog tiny blood vessels.

This condition is one of the neglected diseases, with 80 per cent of the children born dying before their fifth birthday. The ministry of health indicates that 13 per cent of our population carry the sickle cell trait (i.e they are carriers). This means that five million and two hundred thousand people across the country are carriers. A carrier is a person who has one gene for sickle hemoglobin and one gene for normal hemoglobin. People who are carriers generally do not have any medical problems and lead normal lives.

The history of the Kabaka birthday run for sickle cell goes back to January 2016 when the board of directors of Uganda Sickle Cell Rescue Foundation headed by Dr Bulaimu Muwanga Kibirige visited the Katikkiro of Buganda Charles Peter Mayiga.

In this meeting, our board, through the Katikkiro, requested His Majesty the Kabaka of Buganda to consider sickle cell for his birthday run for the years 2017, 2018 and 2019. The idea was to use the Airtel Kabaka birthday run as a tool to increase public knowledge and raise awareness of sickle cell disease while highlighting the challenges faced by the people living with the condition. I am happy to say that we have made significant strides.

Our biggest win has been the Luganda name “Nalubiri” for sickle cell disease. To date in Uganda, only Buganda has a name for sickle cell in the local dialect. Not having a name means that communities are shying away from talking about the issue. In addition, this demonstrates the stigma and discrimination associated with sickle cell in our communities as evidenced through families hiding their sick for the fear of being ostracized in society.

The challenge of addressing this stigma still stands and thus Uganda Sickle Cell Rescue Foundation has requested His Majesty to consider an extension to continue championing the fight against sickle cell in Uganda.

We are optimistic that our request will yield fruits.  With additional publicity through Kabaka birthday runs and other initiatives, we hope to address the sickle cell stigma and its associated social connotations.

Screening is the first step in breaking the cycle of sickle cell disease. Persons with the sickle cell trait should be counselled in order to better understand this. For this to be effective, there is need to consider putting some of the resources towards provision of intensive education for people to make educated reproductive decisions.

In conclusion, I urge the thousands of people who participated in the run to actively engage in the sickle cell fight. This could be through taking a test or encouraging a friend who is dating and is serious about it to take the sickle cell test. I urge all religious leaders to request for sickle cell test results before conducting weddings.

The writer lives with sickle cell disease and is the executive director of Uganda Sickle Cell Rescue Foundation.