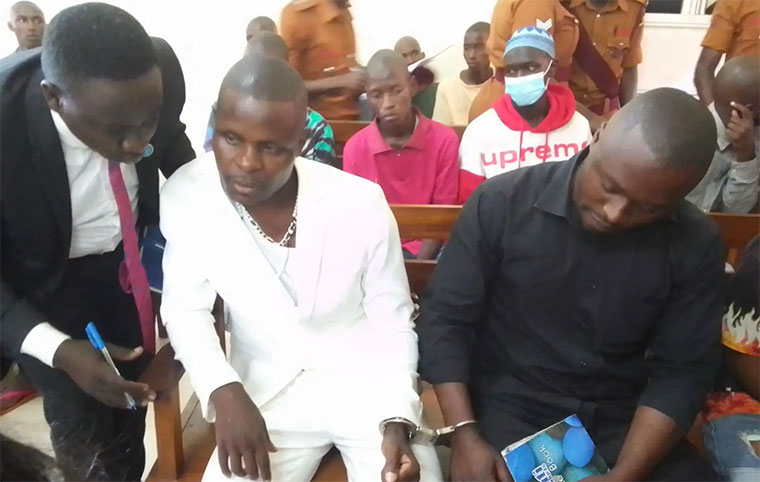 Sipapa talking to his lawyer in court earlier

Sipapa and his wife Shamirah Nakiyemba appeared before the Chief Magistrate's court in Makindye on charges of aggravated robbery last week. Court presided over by Esther Adikini heard that personal items belonging to Sipapa were taken by the police who arrested him and to date, they have not been returned.

Geoffrey Turyamusiima of Wameri and Co. Advocates told court that the police took a home cooker, a car spraying machine, two computers, one monitor, a CCTV camera system, a spade, 1 DVR camera, car sale agreements, car log books, $70,000 and Shs 1.5 million. Other items are seven pairs of shoes, gold chains, seven watches, the wife's necklaces, 6 new Jeep lights, and receipts of all the properties that were purchased by Sipapa.

Turyamusiima noted that he did not know for how long they are going to be kept for purposes of investigations. According to Sipapa, some of the personal items had not been listed on the list of exhibits which made him think that they might have been stolen. But the prosecution led by Harriet Adong in response said that the items listed by Sipapa’s lawyer are part of the evidence. She added that the CCTV camera system is being analyzed by the police forensic team.

Adong also told court that they can’t return the car logbooks to Sipapa since they are not in his name. He says that they are tracing the owners of the cars. Adong adjourned the case to February 27 for committal. Prosecution alleges that Sipapa and Nakiyemba and others still at large during the night of August 29, 2022, at Bunga Kawuku Makindye Division in Kampala district robbed six South Sudan nationals of different items and cash.

At the home of another victim Abig Yar, Sipapa and his wife allegedly stole a laptop and an iPhone all valued at Shs 5 million. They also robbed James Manyok of Shs 400,000. According to the charges, immediately before or after the robbery Sipapa and his wife reportedly used a substance that made all their victims unconscious which made it easier for them to execute their crimes successfully.