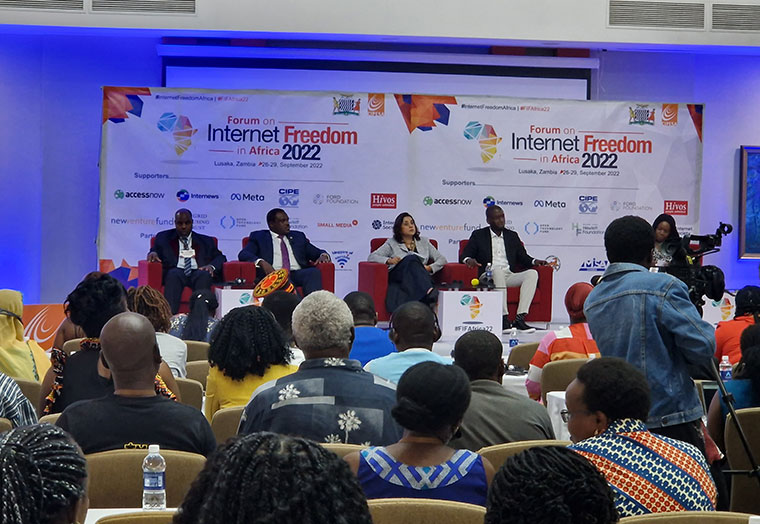 Participants at the forum

The country’s recently passed ‘regressive’ Computer Misuse (Amendment) Bill, 2022 with a clause that criminalizes ‘misuse of social media, the passed and repealed social media tax, and the pre and post-election internet shutdowns shored up Uganda’s reputation as the worst example of an abusive regime of its citizens’ rights online.

It’s coming close to two years since the government shutdown Facebook ahead of the January 14, 2021 elections on suspicion of promoting then opposition candidate Robert Kyagulanyi of the National Unity Platform and in retaliation against the platform’s shutdown of over 220 accounts conspicuously created by the ministry of ICT to shore up President Yoweri Museveni and his son Muhoozi Kainerugaba’s popularity.

Access to the entire internet was blocked for nearly a week while access to other social media platforms was restored after a month. From Ghana MP Samuel Nartey George; Abigail Mpabwa Bridgman of Meta (Facebook) Oversight Board; Jillian York, the director for International Freedom of Expression; Victor Ndede from Amnesty International Kenya; Cecilia Maundu of International Association of Women in Radio and Television (IAWRT); Felicia Anthonio of Access Now and Moses Gowi from Kenya Human Rights Commission (KHRC), all condemned the continued blockade, saying it infringes on the citizens’ rights.

The forum organised by Collaboration on International ICT Policy in East and Southern Africa (CIPESA) attracted more than 500 participants from across the globe. At the same forum, Kenya received praise for keeping the internet on during the recent elections.

However, Victor Ndede, the campaigns officer for digital rights and policy, Amnesty International Kenya, said it was not for lack of wanting, but civil society engaged the government prior and pointed out the opportunity cost of shut- ting down the internet during elections.

“People would have poured on the streets and the government wouldn’t have wanted that,” said Ndede. Kenya’s conduct of the pre and post-elections was under the global microscope. Many feared a recurrence of the 2007 election violence that claimed an estimated 1,500 people. However, few violent incidents were registered with the transparency of the electoral process praised for the upturn of events.

During the parallel discussions at the forum, Qemal Affagnon, the head of the West Africa division, Internet Sans Frontières, said the number of internet shutdowns is going down except for the dictatorial and military governments like Chad “which has the same tendencies as Uganda”.

Felicia Anthonio of Access Now said “an internet shutdown happens when your government decides that they don’t want you to express yourself. They don’t want the information you’re sharing to get out there. So, it is an intentional thing...a technical disruption of the internet is not a shutdown, it is intentional. What we have documented over the years is usually the government will issue an order to ISPs [Internet Service Providers] asking them to shut down the internet...The internet can be shut down in different ways; through slowing down the internet speed also known as throttling or shutting down social media platforms or cutting internet access completely. Sometimes you can have all three happening in one particular incident,” he said.

“In Uganda, we observed that in December 2020, the internet speed was being slowed down, and then around elections, the government shut down social media, and then on the eve of elections the internet was shut down completely. Sometimes the internet is restored after elections. So, the question is what exactly is the purpose? What are you hiding? Why do you deny your people access to information? Internet shutdowns also question the credibility of elections...In another way, the human rights perspective to it is going to deny people access to the contestants, the politicians might not be able to speak to them, the human rights activists and election observers will also not be able to monitor and document what is happening in that particular country,” she added.

In 2016, the UN General Assembly passed a non-binding resolution that “declared internet access a human right.”

TOP10VPN, a tech firm that tracks internet disruptions across the globe, in its re- port, ‘Global Cost of Internet Shutdowns, said Uganda lost $109.7m or $3.8m (about Shs 13 billion) per day for a total of 692 hours (28 days) when the internet was shut down.

Levy, a Zambian participant with hearing impairment, said it gets worse for people with disabilities when they have shut off the internet. He called for more research and more sensitizing of PWDs on how they can circumvent internet shutdowns.

He called on African countries to unite and take on the social media giants like Facebook and Twitter. He said individual country actions like in Uganda, Ghana, Zambia will not get the tech giants to listen to the government’s concerns, especially in regards to sovereignty and national security.

0 #1 Henry Baisi 2022-10-05 19:25
In today's world, technology is synonymous with the internet. It is the key to creating new products and services that can be sold across the globe.

This fact appears lost or almost unheard of in my beloved motherland. Instead, we seem to be going on the Industrial Revolution route, admiring technologies of a bygone era. We are all equally on social media. Taking a fight online damages the brand. Learn and adapt.
Report to administrator
0 #2 Tejaani 2022-10-09 11:21
Quoting Henry Baisi:

In today's world, technology is synonymous with the internet. It is the key to creating new products and services that can be sold across the globe.

This fact appears lost or almost unheard of in my beloved motherland. Instead, we seem to be going on the Industrial Revolution route, admiring technologies of a bygone era. We are all equally on social media. Taking a fight online damages the brand. Learn and adapt.