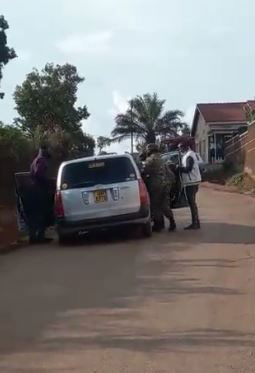 The Uganda People’s Defence Forces (UPDF) has joined the hunt for men in military uniform who were captured on camera kidnapping a Pakistan national in Kireka, a Kampala suburb.

Rafik Khan, who was dumped at Kasangalabi along Kayunga–Mukono road, opened a case of abduction and robbery at Kireka police station which has since been taken over by Kira Division police headquarters.

Col Deo Akiiki, the deputy army spokesperson, said they have picked interest in the case to establish the identities of the people in the video. But Akiiki said they cannot conclude whether it was a lawful operation or a kidnap that turned into robbery as it is being reported.

“One thing we should desist is concluding that it was a kidnap. Every person is regarded as kidnapped or abducted. So, when does a security personnel arrest? There should be all ways of making arrests and this is the world over. But a statement will be given if it all it was a security agency involved,” Akiiki said.

Khan’s kidnap which is now being investigated as aggravated robbery happened on Thursday at around 5 pm at Kamuli road, Namugongo Division, Kira Municipality at 5 pm adjacent to Kireka Grammar Nursery and Primary School.

Luke Owoyesigyire, the deputy Kampala Metropolitan Police spokesperson, said Khan was stopped by a group of people among whom, two were wielding SMGs and donning military fatigue while others were casually dressed.

The video which has since gone viral shows Khan being pulled from the driver’s seat and bundled into the back of his motor vehicle a Probox UBM 877B. The kidnappers, according to Owoyesigyire, drove off via the Northern bypass. Khan's other colleagues who were in the same vehicle appear to have been left undisturbed.

“The unidentified assailants later abandoned the victim at Kasangalabi along Kayunga-Mukono road. We have recorded Mr Khan’s statement and established that he was robbed of $300, Shs 700,000, and his two Samsung smartphones,” Owoyesigyire said.

Police with the help of CCTV cameras have established that the attackers were allegedly dropped off by a Toyota Fielder vehicle and stood in wait for their target. Police are currently using CCTVs to establish the car's movement up to the point where Khan was dumped.

The Kireka incident comes a fortnight after six soldiers were arrested with the help of sniffer dogs from Wakiso policing division over a robbery roadblock mounted at Kyoga swamp. The soldiers were attached to Namusera military detach.

I invite UPDF military and civilian agencies to step up monitoring each and every case of real UPDF or thugs camouflaged in UPDF uniforms to be caught and immediately put in front of military tribunal sacked from the Army and put behind the bars.

Any indiscipline must be strictly punished.
Uganda has many many good sons and daughters who will step.in shooes if these rotten elements..
Report to administrator
+4 #3 Ebmok 2022-10-02 19:21
There's a rhetoric that the leader will continue to defy lawful Ugandan Court Orders.
The same group of people is making repeated headlines of broad-day acts similar to banditry.

In a short few decades past, this leader stated that "the best description befitting Uganda's past murderous leaders like Idi Amin is that of a 'swine'."

What I'm finding with people is that if they don't learn their lesson, then they find themselves back in the same cycle again and the same thing is presenting itself.

Stubborn and insubordinate to God's guidance & discipline and they trample the very code they purport to establish even the one they created to suit their appetite; they falsely appear like well established immovable stamps.

So it's a situation where these people, instead of increasing in wisdom, stature, and favor with God and man alike, rather they end up in the same outcasts of dishonorable history that we'd rather forget.
Report to administrator
+5 #4 Apollo 2022-10-02 21:45
The army (UPDF) does not have any legal basis to arrest and keep a person in custody.

Col. Deo Akiiki should instead request his superiors to go to Parliament and amend the Law, if they wish to arrest civilians.

The Law permits elements of the army to go with an arresting officer of the Police to effect an arrest legally. It is the Police officer who does the arrest in this case.
Report to administrator
0 #5 Lakwena 2022-10-04 15:34
Quoting Wainanchi:

UPDF must be very tough on her army personnel and not allow to see another UNLA terror soldiers who were manning road blocks robbing people, checking their socks ,pickets for money and killing and raping them ...

But Wainainchi, it was the self-confessed enemy within, the Pesco Kuteesa of the NRA in the UNLA uniform, who were manning nasty road blocks, terrorizing and robbing people to fund and facilitate the Luweero Subversion/debacle.

In other words, it was a dirty practice to paint the UNLA black: to provoke resentment and turn especially Baganda and the rest of the international communities against the UNLF administration.

The dirty practice did not end with Obote/UNLF/A. It is now being practiced on NUP, which is a political threat to killers. E.g. who wrecked havoc in Masaka by hacking elders to death with machete, and for which Hon Ssegirinya and Ssewanyana are paying the price?
Report to administrator
0 #6 Lakwena 2022-10-04 15:44
And Wainainchi, if you claim the UPDF is that discipline, why e.g. Gen Muhoozi Kainerugaba is so indiscipline, tweeting all sorts of provocative nonsense and he is not brought to book by the UPDF code of conduct?

In other words, all the pretense of discipline army and the observance of the rule of law, blah, blah black sheep is finally out, arrogant, dirty and ugly for all to see.