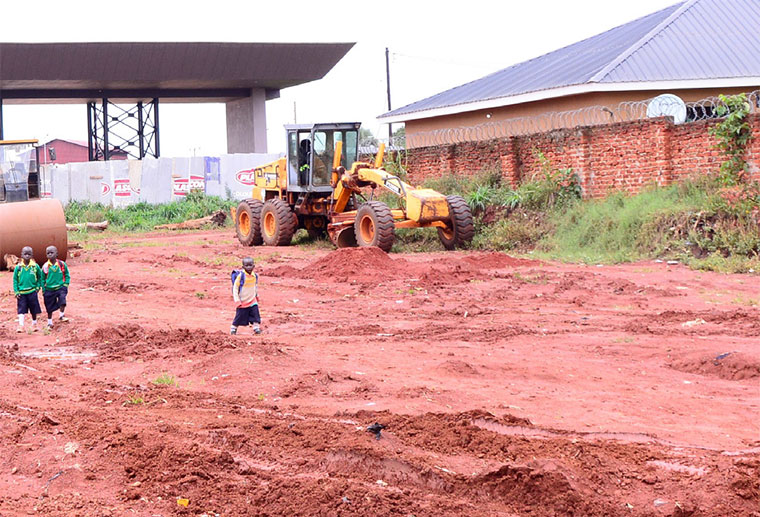 An grader lies idle at the hub

Though completed in April this year, the Gulu logistics hub has failed to start serving its intended purpose due to the failed works of upgrading the Tororo-Gulu and Gulu-Pakwach railway lines and construction of access roads to the hub.

The hub is supposed to be a one-stop centre for goods being transported from Kenya through Uganda to South Sudan and DR Congo, thereby lowering transport costs and trade barriers faced by traders who export goods to these countries.

The hub aims to serve northern Uganda, South Sudan and DRC by ensuring that cargo imported through Mombasa moves straight to Gulu without passing through Jinja or Kampala where traders have to pay extra costs of warehousing.

However, the activities of the hub are to be facilitated by the meter gauge railway line from Tororo to Gulu and Pakwach through which the goods are to be transported but its rehabilitation which was supposed to be finished concurrently with the hub has stalled.

When The Observer visited the premises, there were only a few security guards, the administration block and warehouses all empty and covered in dust. The contactor, Ambitious Construction Ltd, has already demobilized from the site and some open spaces are covered with overgrown grass.

Lenon Ssengendo, the spokesperson of URC, confirmed that the rehabilitation works on the railway line had started but later on stalled due to challenges with the contractor, Sogea Satom Constructions who halted the works.

“Works had commenced on the Tororo-Gulu line and they were moving on well but there were some challenges with the contractor and they disengaged from the site. Right now there are no ongoing works but in a few weeks they will resume from where they had stopped,” Ssengendo said.

He, however, could not tell the timelines these rehabilitation works are expected to be completed but in an interview with the press recently, the state minister for Transport Fred Byamukama said feasibility studies are being conducted on the Gulu-Pakwach line at the tail end.

“The feasibility studies are ongoing and we anticipate that by the end of 2023, the Gulu-Pakwach line which covers 129km will be fully completed and functional and it is going to cost Shs 180bn,” Byamukama said.

0 #1 Lakwena 2022-09-20 14:49
Ugandans and especially the immediate beneficiaries of these railway and road works (Hub) should not be fooled.

The snail-pace railway and road works and/or suspension by the contractor (Sogea Satom Constructions), is deliberate and politically motivated.

It is the regime's delaying tactic to await the 2026 Electioneering and turn into a political capital when launching the damn thing; where the gullible will praise the regime and dance themselves lame. Yet they are the destroyer.

In other words, the regime is notorious for sabotage, neglect and destruction of Public Assets, simply in order to reinvent the the wheel and take the credit for having "transformed this and that.
Report to administrator
0 #2 Lakwena 2022-09-20 15:03
Otherwise, if it is not a long-term calculated ill motives; why e.g., should anybody/honest administration disband and liquidate the Uganda Airline and 30 years later restart from scratch?

And likewise, why neglect a working UR lines/infrastructure and leave to to vandals to feed Steel Mills with the rail lines, nuts, bolts and slippers, and 30 years later start to rebuild the same Meter Railway from scratch?

And what happened to the 2012 SGR Launch at Speke Resort Munyonyo, where Gen Paul Kagame of Rwanda, and Salva Kiir of South Sudan cut tapes before the international cameras? A shameless political bluff!

No wonder Kagame no longer takes Gen Tibuhaburwa seriously, and does not want participate in any Tibuhaburwa phony, inconsequential populist photo shows.
Report to administrator
-1 #3 Akot 2022-09-20 17:39
36 years still counting, but Acholi/Ugandans still expect Museveni to look at them as humans, develop their land, give them a better future!

Why don't coward Acholi tribal leader, mps...ask Museveni, the owner of the fake country, to help develop their land, for those beautiful kids walking in the mud?

When will Ugandans understand they MUST say NO to the divisive tribalistic system migrant Museveni put in place & UNITE to block & show the demon way out & get back their land?

Why are Acholi killed, sent in exile, excluded...for decades by Museveni, now joining him to ensure his lifetime rule & the family business?

What do Acholi/Ugandans still expect from Museveni they aren't tired of?
Report to administrator