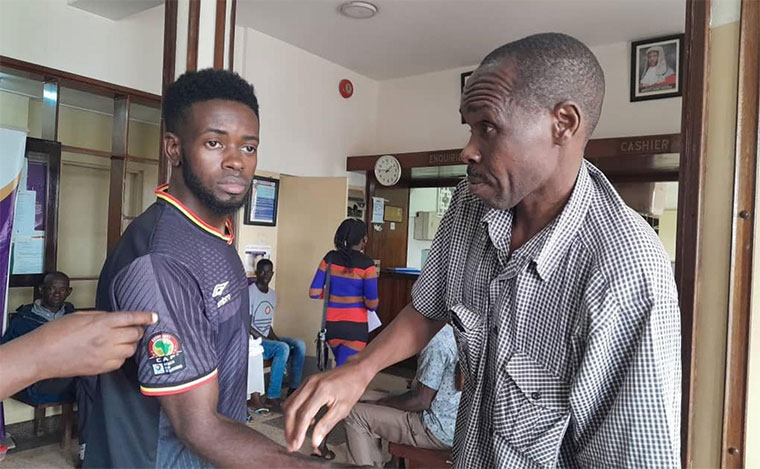 Another supporter of the opposition National Unity Platform (NUP) has been remanded to Luzira prisons on charges related to celebrating the death of Gen Elly Tumwine.

Bashir Kasagga was today Friday arraigned before Buganda Road court grade one magistrate, Marion Mangeni and charged with five counts of unauthorized modification of computer material contrary to the Computer Misuse Act of 2011. Court heard that Kasagga fabricated screenshots of social media messages of government officials and added several falsehoods -  key among them being the celebration of the death of Tumwine.

Tumwine, a former Security minister, military commander and senior member of the National Resistance Movement (NRM), died on August 25 in Nairobi, Kenya. Tumwine's family and several government officials complained about the negativity with which some people used social media to mock the dead general. Many of them cited a statement the former bush war fighter made in 2021 that the police had a right to shoot and kill violent demonstrators.

Court heard that between the months of August and September 2022, Kasagga, a fitness trainer, obtained screenshots of the Twitter handle of the ministry of Defence spokesperson, @UPDFspokesperson, and modified contents to indicate that the army leadership was warning NUP supporters against travelling to Kazo district for Tumwine’s funeral.

According to the prosecution, the falsified screenshots read: "UPDF appeals to the General Public to be calm as we serve food at the send-off of our gallant statesman General Elly Tumwine. We however warn NUP supporters not to dare attend our burial in Kazo. You mocked and hurt the family of our deceased comrade so don’t risk to attend."

In the same way, the court heard that Kasagga obtained screenshots from the official Twitter handle of the Uganda Police Force, @PoliceUg, and modified the contents therein to read: "We want to sound a warning to the general public that we shall come for you and apply iron fist on you if you can't learn some morals, our safe houses shall teach you."

It is also alleged that Kasagga further digitally modified the screenshot of the police Twitter handle to read: "In light of instilling morals in this rotten generation that has made it a hobby to jubilate when government official die, we have arrested Tracy Manule, a NUP supporter, to serve as an example to the rest. The suspect posted the video celebrating the death of Gen Elly Tumwine.”

Kasagga is also accused of modifying screenshots of the Twitter handle of the speaker of parliament Anita Annet Among, @AnitaAmong, to read: "It is with great happiness that I have received news of the death of Gen Elly Tumwine. I even told the Pope that this deceased man tortured and killed Ugandans. When I was still in the Forum for Democratic Change, General Tumwine abducted Besigye supporters. It is good that he has died.”

Other Twitter messages Kasagga allegedly modified and falsified include that of Events promoter Balaam Barugahare Ateenyi, @Balaam1980. The evidence before court shows that Kasagga changed the messages without getting authorization of the mentioned holders of the Twitter handles and he reportedly executed all the offences against him within Kampala district.

But Kasagga denied the charges and has been remanded to Luzira Prisons until October 3. Prior to his remand, Kasagga was asked by the magistrate if he had sureties but he neither had sureties nor legal representation. He was brought to court limping while wearing a black Uganda Cranes jersey. According to the NUP party leader Robert Kyagulanyi, Kasagga has been missing since Tuesday. Last Friday, the same court remanded another NUP supporter, Teddy Nalubowa also known as Tracy Manule Bobiholic, on charges of offensive communication.

It is alleged that on August 23 at Ndeeba, Rubaga Division in the Kampala district, Nalubowa willfully and repeatedly used electronic communication on Facebook and TikTok to disturb the peace or right of privacy of President Yoweri Kaguta Museveni.

She reportedly did this by saying "Tumwine finally you have died but you died a long time and your boss President Museveni will also die, you will die one by one and we shall celebrate.” According to the prosecutors, there was no purpose for legitimate communication in this.

You can't go arresting people because they dance on your grave. It does not matter anymore. Death is final.
Report to administrator
+4 #2 kabayekka 2022-09-17 03:04
It seems the NRM oriented judges are going to have a hard time to pass judgment on this type of modern social media communication.

If not then these culprits are already guilty as charged. One hopes the Uganda prisons are likely going to fill up with such media criminals instead of the many administrative criminals very busy stealing the taxpayers money left, right and Centre!
Report to administrator
+3 #3 Jose 2022-09-17 06:46
Intimidation drive anticipating announcement of ndeath of another one
Report to administrator
-14 #4 rwigyema noah 2022-09-17 09:23
this wat happens when village boys access the internet for the first time in their lives.. too much excitement.. let him go to luzira to reduce on his excitement
Report to administrator
+1 #5 Joe 2022-09-18 15:08
In Buganda celebrating the demise of someone they don't like is a norm, dont you remember Ken "the man" leading celebrations at Wankulukuku when Milton Obote died?
Report to administrator
+7 #6 Zaitun 2022-09-18 15:30
What is wrong to celebrate the death of a man who was nothing but evil, who after fighting in Luwero left behind heaps of human bones, drove away people from their burial grounds to confiscate them as his own: a man whose orders were final; a man without whose trigger happy fingers, Museveni and his acolytes would not be in power; a man who commandeered death in every street corners and villages?

Were you guys not happy to announce, "we killed them", refering to those Ugandna you killed?

Why all these desperations? The music is just beggining! Wait and see when and how Ugandans will dance until their legs get shorter because of joy and tiredness!!

Arresting an innocent man just because he was happy will not solve your problems.
Yes one by one, the stars that have been soucres of darkness are starting to disappear, and many more will fall within a few years and we shall soon be out of the darkness imposed on us by demons!!
Report to administrator
+1 #7 Lakwena 2022-09-20 07:56
But I wonder how many charges Gen Tibuhaburwa and cabal will have to answer after their 5-year Organized Murder in Lwueero, and 25 years in Acholi Sub-region e.g.: singing and bragging.about how the NRA massacred the stupid people of Acholi at Kona (corner) Kilak.

By the way, wasn't Gen Tumwine the one composing all the NRA celebration songs, like Motto na waka, singing, dancing and mocking, how they killed/massacred their victims?

But during the Swearing of the 1th Parliament's MPs, why wasn't Gen Elwelu arrested on the steps of after he public celebrated the massacre of the subject of the Musinga saying "these people deserved to die (without trial and/or fair hearing).

NUP supporters and million other Ugandans out there, are not the ones who killed Gen Tumwine. They must be celebrating for a good reason, which is an indictment on the regime.
Report to administrator
+1 #8 Lakwena 2022-09-20 08:09
For Heaven's sake, Gen Tibuhaburwa and Tumwine of this country were singing and dancing while robbing Banks, stealing Cassava, chickens, goats, cattle and killing innocent Ugandans.

And after their bloody capture of political power; here they are, mocking and prosecuting their historic victims of violence.

In other words, who are the villains or victims of celebrating the death Gen Tumwine?
Report to administrator