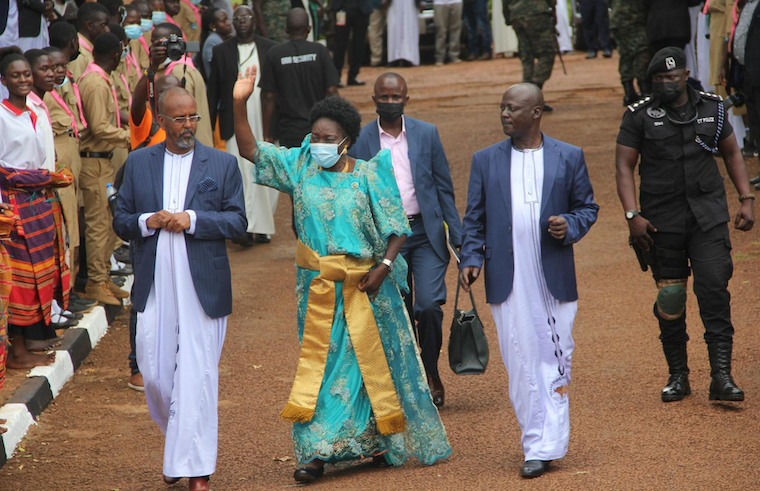 The first deputy prime minister Rebecca Kadaga, has no kind words for political actors fighting against the Nyege Nyege festival scheduled to start this Thursday.

Although given a green light by the government, speaker Anita Among and a section of MPs have persistently called for the cancellation of the festival. Now Kadaga those fighting against the festival just want to economically sabotage Busoga sub region.

Kadaga was representing President Yoweri Kaguta Museveni, at the eighth coronation anniversary of the Kyabazinga, Gabula Nadiope IV on Tuesday.

She said that Nyege Nyege is the only festival which earns both direct and indirect incomes for traders within Busoga sub-region and cancelling it will definitely cripple their economy.

Kadaga who doubles as the minister in charge of East African affairs notes that the festival has already attracted thousands of foreign revellers, who have since pitched camp at the different hotels within Busoga sub-region, Buikwe and Kayunga districts respectively ahead of the festival.

She further argues that Uganda is a morally upright country and it is impossible for responsible authorities to approve immorality festivals aimed at degenerating the cultural values of society.

Kadaga stressed that it would be totally unfair for political leaders to agitate for the cancellation of Nyege Nyege, yet similar festivals are carried out in the different parts of the country unchallenged. She further challenged leaders to use their platforms in promoting the economic interests of Busoga, rather than sabotaging them.

Kadaga however says that the mixed reactions being peddled by different leaders against the Nyege Nyege concept have instead created curiosity within the wider public domain, which has, in turn, rallied more formally uninterested individuals, to flock to the festival on presumed exploration and a fact-finding mission.

Meanwhile, Gabula has rallied his subjects to embrace the pillars of agriculture, education and accountability, as the major means of bettering their livelihoods.

Are basogas waiting for this dangerous staff to become well .let them stop it.
Report to administrator
+7 #2 Lysol 2022-09-15 01:13
The voodoo princess was the 3rd in line of power as the speaker, for many years, and could not develop Busoga.

How can some ritual dance festival becomes the harbinger of development?
Report to administrator
+2 #3 Henry Baisi 2022-09-15 13:46
Isebantu Kyabazinga, Agriculture has not lifted the Basoga from poverty in the last 36 years.

Do you have a different blueprint from the usual sugarcane and sugar mills? I would love to hear it.

Do you have a plan to create jobs for Educated Basoga? What exactly do you mean by integrity, and how will Nyege Nyege contribute to creating a society with Integrity?

Mr Integrity, at the last gathering of Basoga in the UK, I was tasked to explain why you are still single. I had no explanation. Can you help, please?
Report to administrator
+2 #4 Zaitun 2022-09-15 16:39
Yes, Uganda, as a nation, is already doomed under the leadership of these monsters. How on earth can you refer to such monstreal organisation as a development?

During the sixties and seventies, those in power did not use such evil activities as developmental programs. All you are interested in is to see Ugandans getting desperate in their own country, but relying on handouts which you people in power proudly use as means of imprisoning and enslaving them.

Do you know how many girls, regardless of their ages, get sexually abused during such ceremonies. Yes, you do not care just because those who fall victims are not your own kids.

Instead of putting a strong protest aginst its organisation, you as a mother and a grandmother, is all cheers giving support since those going to get doomed are not your blood. What sort of leadership code are you portraying to the country?
As long as those going to get doomed are not your children, you do not care. Thanks madame!
Report to administrator
0 #5 WADADA rogers 2022-09-15 21:58
She was indirectly referring to her successor in title
Report to administrator
+1 #6 Lakwena 2022-09-16 07:32
In other words, including moral corruption; under the NRM leadership, the end (wealth) justifies the means (Nyege-nyege), concealed slave trade, organ trafficking, etc.
Report to administrator