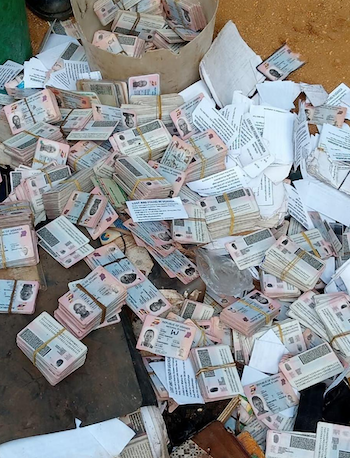 Some of the recovered National IDs

The National Identification and Registration Authority (NIRA) and the Criminal Investigations Directorate (CID) have commenced investigations into how dozens of original National IDs ended up in Lubigi swamp. Suspected stolen IDs, passports, vehicle numberplates and various other documents were recovered during the eviction of wetland encroachers by joint security agencies on Wednesday.

They were recovered from a temporary structure, belonging to Akim Terwane and his wife Rahuma Nayembale. One of the police officers at Lubigi police post who preferred anonymity and was part of the operation, said that all the recovered National IDs and passports were found packed in different sacks, hidden under the bed, while the motor vehicle number plates were found hidden on top of the roof.

Kampala Metropolitan police spokesperson Patrick Onyango, says that Terwane told detectives that IDs were not stolen but rather picked from various places.

“He says that the documents are not stolen but lost and picked ones, from various places. He claims that he collects these documents from various palaces abandoned, and they normally announce using megaphones for the owners to pick on negotiations to pay him small money," Onyango said.

Although the suspect claims that these are lost and found documents, some of their neighbours have reportedly informed police how they are not aware of such activities of picking and announcing lost documents within the same area.

Sandra Awori who lost her National ID to thugs who snatched her bag in Kasubi in 2019, said, unknown people suspected to be fraudsters kept calling her informing her that they'd recovered her lost property.

“I wish the police give us an opportunity to check among those national IDs. Maybe some of us could recover them after they were stolen from us. Those people could change the venue I was supposed to pick my properties twice. I suspect these were the same thugs, Awori said.

+3 #1 kasede 2022-08-26 17:53
Most likely explanation is this: These passports were bought off from the owner to STOP THEM FROM VOTING IN THE LAST ELECTIONS that Uganda has had.

Prove my speculative guess EITHER WAY (wrong or right) by checking if those IDs were actually used during the last elections. We live in an interesting democratic time, don't we?
Report to administrator
0 #2 kabayekka 2022-08-26 18:01
Indeed these are some of the immigrants and refugees who easily get on the transnational buses from the whole of the East African region and come over to Kampala slams to make a living.

This will teach these politicians who want an easy entry into the big and modern African association of the East African region where a population of about 200 million people await civil services that does not seem to materialize.
Report to administrator
+1 #3 kabayekka 2022-08-27 13:32
If this very anxious poor African country of Uganda of 35 million souls cannot have its civil services properly given out to its citizens what will be the mess when Uganda is well settled in the East African Community of over 220 million African people?

Surely this lost property business fraternity should be given a reward to collect lost identification documents so that the government gives them back to the rightful owners as soon as possible!
Report to administrator