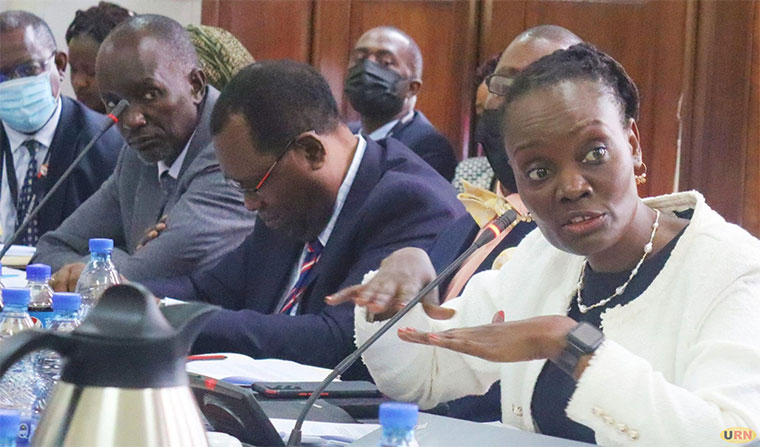 Bamuturaki was detained alongside Ephraim Kalyebara Bagenda, the director of engineering and maintenance on the orders Cosase chairperson Joel Ssenyonyi. Bamuturaki, then commercial director who also doubled as the contracts manager and working under Bagenda as the acting CEO of Uganda Airlines allegedly hired Abbavater Group Limited, an advertising firm to brand and market the newly revived national airline in and outside Uganda at a cost of $540,000 (about Shs 2.067 billion) without opening the process to a competitive bidding process, thus flouting PPDA procedures.

Ssenyonyi tasked the two to explain their role in the deal, but both Bamuturaki and Bagenda said they could not remember, and referred the committee to the procurement department of the airline which was not present at the time of the meeting for responses.

While Bamuturaki also denied any 'legal links' to Abbavater, she appended her signature on the copy of the agreement signed on September 6, 2019, as a witness to the deal which conflicted with her position as senior staff of the airlines.

It was later discovered that Bamuturaki was part of the Abbavater Group, and went ahead to influence the process of contracting the company without declaring her conflict of interest which raised queries about transparency in the award of the contract.

The MPs established that Abbavater was first hired by Uganda Airlines to undertake a basic topography survey to produce typographs, a hydrogeological survey to cite potential underground water sources and later to manage public relations.

The MPs further established that Bamuturaki and Bagenda conspired to handpick Abbavater and blocked the process of competitive bidding thus flouting procedures of the Public Procurement and Disposal of Public Assets Act of 2003.

Bamuturaki and Bagenda, alongside other top officials of the airlines, were for the third day appearing before Cosase to answer the queries relating to the Auditor General’s report of FY 2020/2021 implicating the management of lack of staff structure, varying salary employee grades, illegal procurement and poor contract files management among others.

When asked for her academic documents, Bamuturaki said she has never picked up her Social Works and Social Administration (Swasa) transcript from Makerere University, 28 years later. She also failed to produce her O'level certificate, saying she misplaced it several years ago even though on Wednesday she'd said she would produce it on Thursday.

Asked how she has been able to get all the jobs in the hospitality and aviation industry without original academic documents, Bamuturaki said that she has been lucky to be head hunted at most of her job positions. She has previously worked at Sheraton hotel, East African Airlines, and Air Uganda in various positions.

Another controversy emerged on Bamuturaki's purported change of names in a March 2019 deed poll filed and stamped by the Uganda Registration Services Bureau to Jenifer Arnold Lenkai. She however told the MPs that she didn't conclude the process of changing names, as she changed her minds along the way and still remains Jenifer Bamuturaki Musiime with Musiime being her marital name while Bamuturaki is her father's name.

While COSASE might achieve the objective of robustly following up on the Audit General's report and might have others worriedly looking over their shoulders and quacking in their boots, these 2 are small fish in the great scheme of things.

Those who had her installed remain in place and in a position to influence any sanctions, if the allegations are proven unlike for the drug dealers who, once caught, are simply replaced with new ones by the drug lord. And here the analogy ends.

Hopefully, if the misdeeds are proven, those legally empowered to impose sanctions will be allowed to do so without impediment otherwise the victory of proving the allegation will be no more than a pyrrhic victory.

That said, COSASE still has to be applauded for standing up to corruption. It sends out a clear message. Hope springs eternal.
Report to administrator
+7 #2 Lysol 2022-08-19 05:09
No surprise here; nothing works in a failed state.
Report to administrator
+6 #3 Uncle Philo 2022-08-19 07:39
But now I don't think there are enough cells to detain every one invited by the committee.. Because everyone from the appointing authority to ministers including education and other parastatal leaders have inconsistent documents both academic and identity.

The only problem is that poor Bamuturaki was unlucky that she didn't have access to "Gamba N'ogu" by the time she was detained. She is just a messenger/actor.

Like all previous findings, in the end a report will be written by the committee. The real CEO (Chief Embezzlement Officer) will throw it to the dustbin and life will go back to normal.

The group flung themselves with the UPM 1980/86. This rich and expensive employment for their political succession is the rebursement of the long suffering veterans of the Luweero triangle.
Report to administrator
+6 #7 Henry Baisi 2022-08-19 16:20
My fellow countrymen and women, running a transportation business, let alone an airline is not a piece of cake.

Uganda, let alone Bamuturaki with her Swaswa, does not have the capacity or experience to run an airline.

M7 should talk to the Ethiopians, they are the masters of running international airlines. Ethiopia can provide us with manpower to help us run the airline.
Report to administrator
+6 #8 Mubiru 2022-08-19 18:26
The British Daily MAIL of today 19 August reports that 2 pilots on ETHIOPIAN AIRLINE fell asleep at 37000 ft.

They finally awoke when alarm went off and auto pilot disconnected and land the plane. Well at least uganda pilots and staff sleep at their desks and not in the air.

For Bamuturaki the woman is untouchable since despite all her dubious record Museveni hand picked her. Credit to the investigators to expose her unsuitability and incompetence etc. Job well done though no body will ever sack her as long as Museveni is still Museveni.
Report to administrator
0 #9 Jama 2022-08-20 19:46
Nepotism, tribalism and corruption came aboard the same vessel. They were followed by impunity and incompetence," hence creating the rule of garbage.
Report to administrator