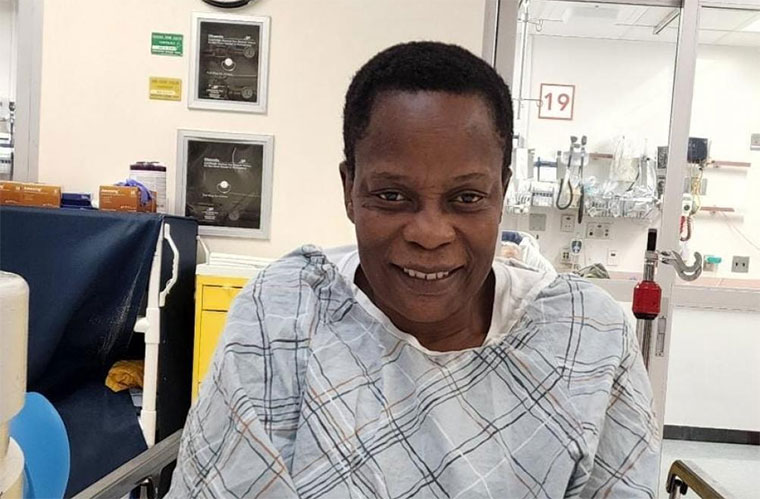 Betty Nambooze in the hospital

A US hospital where Mukono Municipality MP Betty Nambooze Bakireke is receiving treatment has written to the speaker of parliament indicating that the MP might stay longer than anticipated.

In a letter dated August 3 to the speaker of parliament Anita Among, Bellevue Hospital Medical Centre through Nambooze’s physician Prof Allen Keller said that the legislator needs to undergo extensive evaluation before she can be discharged.

"My particular expertise is in caring for survivors of torture, a category in which she falls. Over the past several years, [her] health has deteriorated as a consequence of injuries she suffered to the spine in 2017 as well as subsequent surgeries she underwent with limited success." Keller’s one-paged letter which is also copied to the clerk to parliament and Mulago hospital reads.

Keller added that Nambooze now requires extensive and likely prolonged evaluation and treatment with the aim of restoring her health. This includes the possibility of her having to undergo additional procedures. The letter adds that although Nambooze’s condition was extremely poor by the time she was admitted, she has been responding well to treatment.

"However, given the severity of her prior injuries, and her clinical course to date, she requires substantial additional time to undergo and to receive necessary evaluation and treatment. Presently, neither can nor is appropriate to speculate on how long this will take. For the foreseeable future, she will continue to receive care under my supervision,” Keller, the founder of the Bellevue Program for Survivors of Torture and an associate professor at the New York University School of Medicine writes.

Nambooze was one of the MPs who were brutally assaulted when members of the Special Forces Command (SFC), the elite force that protects the president together with other security forces raided parliament in 2017 after a standoff that had for two days running stopped parliament from debating a controversial constitutional amendment to lift the presidential age limit from the constitution.

Prior to the amendment, the law forbade anybody who is below the age of 35 and above 75 from contesting for the presidency. But it gave way to President Yoweri Museveni to contest again in 2021, and was declared president having defeated his closest rival Robert Kyagulanyi Ssentamu in a hotly and perhaps the most violent election in Uganda’s electoral history. If he completes his term in 2026, collectively Museveni will have ruled Uganda for 40 years.

Prior to going to America in June, Nambooze had for over three weeks been admitted to Lubaga hospital after having had numerous falls while at her home. In an interview with URN then, Nambooze said the torture she suffered had triggered a condition known as peripheral neuropathy, which is a result of damage to the nerves located outside of the brain and spinal cord.

According to mayoclinic.org, this condition often causes weakness, numbness and pain usually in the hands and feet. It can also affect other areas and body functions including digestion, urination and circulation.

For Nambooze, this condition caused excruciating pain which required her to be given strong pain killers every three hours. It has also caused her sight difficulties, and affected her ability to control temperature and also balance. It is the lack of balance that had been making her fall.

In the interview she also revealed she was meant to stay in America between two to three months yet according to her, parliament had only facilitated her for three weeks. It’s not yet known how long and how much her stay is going to cost.

E..g., wasn't in 1990, as one of the students leader (Speaker) in the Freedom Square, Makerere University Yakobo Oulanya was beaten to near death and two other students shot dead by the NRA?

When, as UPC MP for Omoro County, wasn't Gen Tumwine who boxed Hon Oulanya in the ribs, in one of the Parliamentary corridors?

In other words, Ugandans haven't woken up to the fact that they are under a bloody killer regime that blames its victims of violence and organize murder
Report to administrator
0 #12 kabayekka 2022-08-21 10:53
Lysol are you in your right mind?

Who does not know in this country that the tax payer is on gun point to pay for everything that this self imposed government wants? All the high debts plus the constant bribes given out in the so called democratic by-elections that must be paid at once by the Ugandan tax payer.
Report to administrator
+1 #13 Denis Tekkwo 2022-08-21 22:13
So why aren't the NUP fanatics demonstrating outside the hospital as they did when the late Jacob Oulanyah was admitted in The US?
Report to administrator
0 #14 Lakeri Flo 2022-08-21 23:34
Am I in my mind? Is this Namboze of NUP in USA hospital? Dayo wamwee.
Report to administrator
+1 #15 masembe 2022-08-22 12:43
Those complaining just to be reminded that the condition of Hon. Nambooze is a result of Anita Among's predecessor Rebecca Kadaaga who called in the sfc and other security organs to terrorize whoever was against the removal of the age limit in favour of M7s life presidency.

We all watched the in human actions on that day. So our taxes are suffering due to the dictatorship and it's repurcations
Report to administrator
12