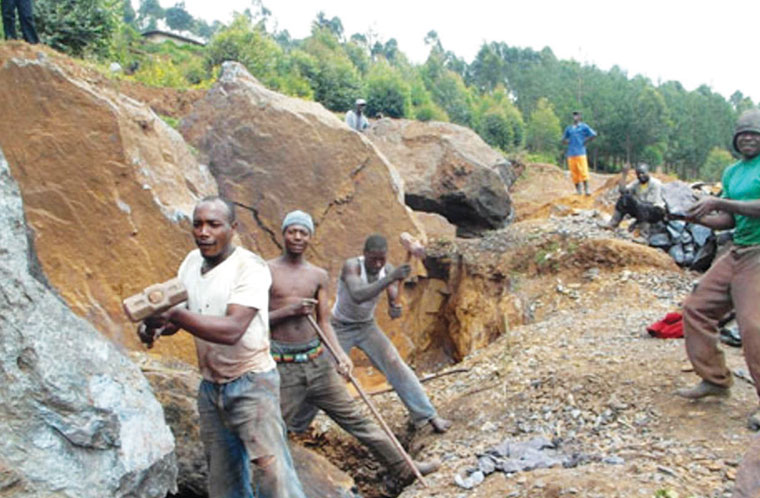 As Uganda gears up to drill its first oil in 2025, little to nothing is said, deliberately or not—about other natural resources of equal or greater importance like iron ore.

In the period 2007 to 2008, the directorate of Geological Survey and Mines [DGSM] which is under the ministry of Energy and Mineral Development, carried out a geological exploration in Kabale district by airborne magnetic surveys.

The Uganda Investment Authority [UIA] places total deposits of the rock at 500 million tonnes, with 200 million tonnes of those confirmed in the Kigezi region alone; according to a government geological survey carried out in the period 2014 to 2015.

“Out of the over 500 million tonnes of iron ore available in the country, only 0.0033% is being utilised per year,” reads UIA’s official website.

Iron is the world’s most commonly used metal and it makes up to 95% of steel. It’s used primarily in structures, ships, automobiles and machinery. The consumption of iron ore grows by 10% per year, and its biggest producers are: China, Brazil, Australia, India, Russia, Ukraine and South Africa.

China is presently the leading importer of the rock shipping in 1.07 billion tonnes in 2019, according to statista.com, trailed by Japan and South Korea. As of this writing, a tonnes of iron ore goes for $105.42. This comes after the mineral recorded an all-time high price of $230 per tonne, in May 2021.

With the boom in the property market, together with increased demand for steel, cars and appliances, the demand for iron ore is only bound to increase. Therefore, the reserves in Uganda - 500 million tonnes, at the current trading price — $105.42 are grossly valued at over $52.7 billion. Besides, the mineral’s reserves in Kabale district in: Buhara, Katuna-1, Kicumbi, Karukara, Katuna-2, Kamuterere, Muruhita and Mwiguriro are currently priced above $7.7 billion going by the current market valuation.

Even so, the price of iron ore has been forecast by analysts to rest at $150 a ton. This will snowball the valuation of Uganda’s ore to plateau at $75 billion. This means that the reserves in Kigezi alone placed at 200 million tonnes by UIA, could rise up in value to $46 billion at peak prices of $230 a tonne as was seen in May 2021.

Unlike oil that is facing hostility from environmentalists and climate change enthusiasts the world over championing green movements like NetZero, and #stopeacop for Uganda, making the exploitation of the resource cumbersome, iron ore doesn’t call attention to itself and can be exploited serenely.

Suspiciously, Bank of Uganda’s composition of exports neither confirms nor captures statistical data involving the export of iron ore that amounts to 9,000 tonnes; but registered cobalt that didn’t earn the country a penny for a five-year period [2014 to 2019]; how observant!

On the brighter side, the rock has been forecast to reach highs because of a lingering shortage that has been caused by a trade dispute between China [largest consumer], and Australia.

This beef resulted from Australia making public calls for an international investigation into the origins of Covid-19; and its criticism of China over the crackdown on dissents in Hong Kong, and human rights abuses in Xinjiang.

This action by Australia started a butterfly effect that is showing signs of benefitting Africa; because Australia’s actions rubbed China the wrong way, effectuating the replacement of Aussie ore, with African ore— starting with the biggest undeveloped iron ore deposit in the world — Simandou, Guinea.

In 2019 the Department of Foreign Affairs and Trade, and the Australian Bureau of Statistics revealed that overtime, Australia had exported iron ore to China to the tune of over $45 billion. This void, is now going to be filled by Africa, with Uganda in line to get a slice of the pie.

Since after world war II, there has been a scare of the depletion of iron ore that has carried on to-date; with geoscientists foreseeing its exhaustion in 30 to 70 years. This panic is going to keep its price high. Importantly, the major economic constraint in the exploitation of iron ore is the position of the ore relative to the market.

Not the size or grade of iron ore reserves. Applaudingly for Uganda, most of the areas with large amounts of iron ore are traversed by Uganda’s railway network; save for the Kigezi region, that can be connected to the existing railway net- work in Kasese by a roughly 223 kilometre rail extension from Kasese to Kabale through Ishaka.

In light of these facts, no mineral is going to transform Uganda if the terms of exploration and exploitation are unfavourable for the nationals, and if Uganda is marred by poor leadership.

Nonetheless, in handling iron ore, Uganda can imitate the government of Botswana under Seretse Khama that renegotiated the diamond mining agreement to guarantee itself the lion’s share [50%] of the diamonds’ revenue.

By doing so, Botswana moved from being the world’s third poorest country in 1966 to having a surplus budget in the mid ‘70s. The failure to embody a nationalistic, corrupt-free and meritocratic public governance system in handling Uganda’s resources is going to bury the country in an oubliette.

The author is an independent financial, investment analyst

+1 #1 Jama 2022-08-03 15:25
The day this country will be under a responsible and a patriotic regime, Ugandans will enjoy the benefits of these natural resources.

These resources can create jobs and economic diversity.
Report to administrator