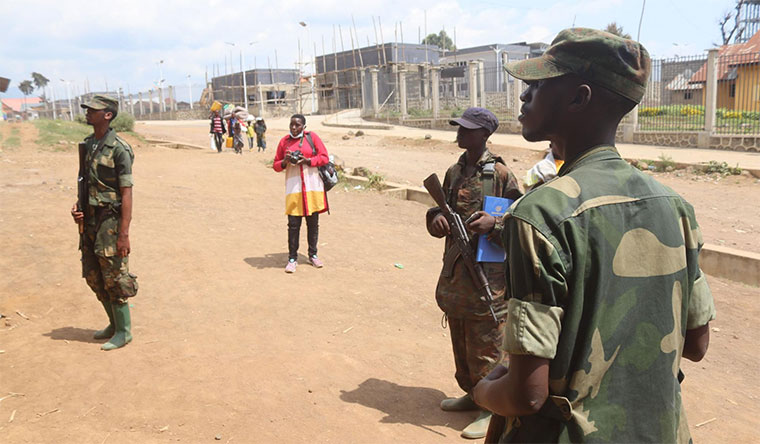 Some of the M23 rebels at the Congo-Uganda border

The fighting happened in Kabingo and Rubavu villages in Busanza. In Rubavu village, FARDC soldiers and the militia groups of Nyatura and Democratic Forces for the Liberation of Rwanda (FDLR) attacked the rebels’ positions.

In Kabingo, clashes started after a FARDC military patrol crossed an M23 position heading in the direction of Musezero, according to an M23 rebel who told our reporter on condition of anonymity. He says that the gunfire exchange lasted for hours but later ceased.

Lt Col Guillaume Ndjike Kaiko, the spokesperson of the Sokola 2 operational sector confirmed the fighting saying that FARDC soldiers repulsed the M23 rebels who were trying to loot crops of civilians.

The M23 rebels are yet to release an official statement about the matter. But last week, rebels issued a warning accusing FARDC, Mai Mai, and FDRL rebels of conducting ground preparations in Kiwanja, Rutshuru town, Rubare Rugari, and other surrounding villages to start fresh attacks.

Fighting between M23 rebels and FARDC troops started in March. Rebels on June 13 captured the major Uganda-DRC border of Bunagana and the neighbouring areas after over 150 FARDC troops who were in charge fled to Uganda.

The rebels claim that they are fighting bad leadership in DRC based on corruption, xenophobia, and discrimination. Fighting has left more than 160,000 civilians to flee Rutshuru. More than 40,000 fled to the Ugandan side of Kisoro district.