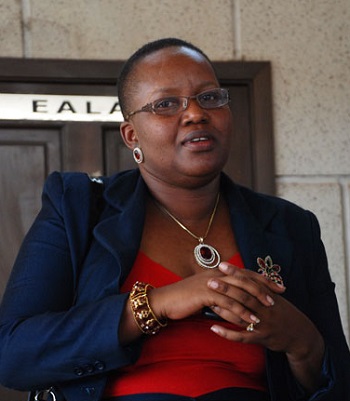 Lydia Wanyoto Mutende has lost her appeal challenging the victory of her rival, Connie Nakayenze Galiwango, the Mbale city woman member of parliament.

Wanyoto stood against Nakayenze in the January 2021 polls and lost with an overwhelming margin. She polled 25,276 votes against 40,729 garnered by Nakayenze.

She protested the poll results and petitioned Mbale High court alleging electoral malpractice including among others intimidation of presiding officers and tampering with the result declaration forms. Wanyoto asked the High court to nullify the election results and order for re-election.

Justice Andrew Bashaija, however, dismissed the petition with costs on grounds that the applicant had failed to prove her claims. Dissatisfied with the High court decision, Wanyoto, through her lawyers, filed a notice of appeal on September 30, 2021, and lodged a memorandum of appeal on October 28, 2021 to include additional evidence.

However, by the time Wanyoto filed her memorandum of appeal, it was late since rules 30 and 31 of the Parliamentary Elections Interim Rules provide for filing an appeal within seven days from the day of the judgment. Wanyoto told the court that she was delayed by the failure of the court to avail her and her lawyers the record of the proceedings of the High court to enable her to draft the appeal.

She claimed that she only accessed the proceedings on October 27, 2021. That without a judgment and record, Wanyoto had no basis on which to base her criticism of the trial court,” argued Wanyoto’s lawyer. Wanyoto applied to amend her memorandum of appeal and validation of the same. The court granted her permission to amend the memorandum of appeal.

However, a panel of three justices comprising Elizabeth Musoke, Christopher Madrama and Eva Luswata have dismissed the appeal, stating that by filing the application, Wanyoto and her counsel conceded that both her memorandum and record of appeal were filed out of time.

“We have rejected her application to validate both proceedings or allow an extension for them to be filed out of time. In essence, there is no valid appeal before this court» reads the judgment from the court of appeal. The panel hence struck off the appeal with no orders as to costs.

Galiwango, who now retains her seat, was in jubilation, following the court decision. She says that Wanyoto will have to pay costs as directed by the lower court.

0 #1 Odongkara Bidong 2022-06-22 08:02
Wanyoto’s protest of the poll results of her 25,276 votes against Connie’s 40,729 tells of the arrogance, pride and greed this woman is into, otherwise how can she fail to read into the disdain Mbale has towards her if not blinded by these evils in her? The next best things for her to do are two:

1- Humbly tame her pride and arrogance and accept the reality on the ground that Mbale has rejected her and dusted off her case.

2- Take and house her greed into the NRM CEC where they have a yellow bus for transporting her greed round the country and leave the malewa diehards in peace! Well done Mbale! The spirit of Malewa should spread country wide to rid us of her unsalable brand!

This mentality to “own” everything in this Uganda must be destroyed! You want to be CEC member, you want to be MP, you want to be minister....etc like a Chris B, why??? Ugandans must wake up and reject such greedy wolves, we have many competent people who are redundant, involve them too!
Quote | Report to administrator
+3 #2 PaulM 2022-06-22 09:45
Good for her. Let her pay for wasting people's time. This NRM puppet is not parlimaent material
Quote | Report to administrator
+1 #3 Lakwena 2022-06-22 10:53
In other words, "Politics without principles" is the price Wanyoto is painfully beginning to pay.

Otherwise, who will pick Wanyoto's Bill of costs of the two petitions to Hon Connie Nakayenze Galiwango?

Just asking a moral question!
Quote | Report to administrator
+1 #4 WADADA rogers 2022-06-22 11:18
To answer your question, she will begin by begging NRM to pay her costs lest she finds herself in the coolers.

Secondly, she will have to pull down her posters and close her office somewhere in Maluku before becoming a shadow of her past. She will never be an MP in any democratic process.

Being cunning as she is, Museveni will place her somewhere now that the only position she holds illegally is representing women at the NRM top Organ otherwise known as CEC. In the meantime, she has to hold on to the NRM flag having rigged her way to take the NRM primaries
Quote | Report to administrator
0 #5 Apuuli 2022-06-22 13:56
Ms Wanyoto eat humble pie. Let your eyes be opened. You were not wanted either by the electorate in Mbale or even within your NRM party establishment.

Otherwise, orders would definitely have filtered from above, to swing these judicial rulings in your favour. Henceforth, take a step back, from trying so hard to defend a system that hasn't served Uganda, like you usually do on radio. And then, talk nicely to your opponent Ms Galiwango. Perhaps she might be more conciliatory to you, and write off the costs you owe her
Quote | Report to administrator
Refresh comments list
RSS feed for comments to this post
Add comment